One year ago this month Jessica Rabbit made her first ever in-park debut. The appearance was part of the very exclusive Disney Dreamers Everywhere event, which included trips to every Disney park around the globe. Disneyland Paris was the final stop and some of their surprise characters were Roger Rabbit, Eddie Valiant and Jessica Rabbit. Though this was quite a surprise, the majority of people were unsatisfied with Jessica's look, stating that she should be an unmasked performer. Below you can read all the news that went on from that time, with direct quotes from people on the Jessica costume, photos, video and my own thoughts on this unforgettable moment in Jessica Rabbit history. 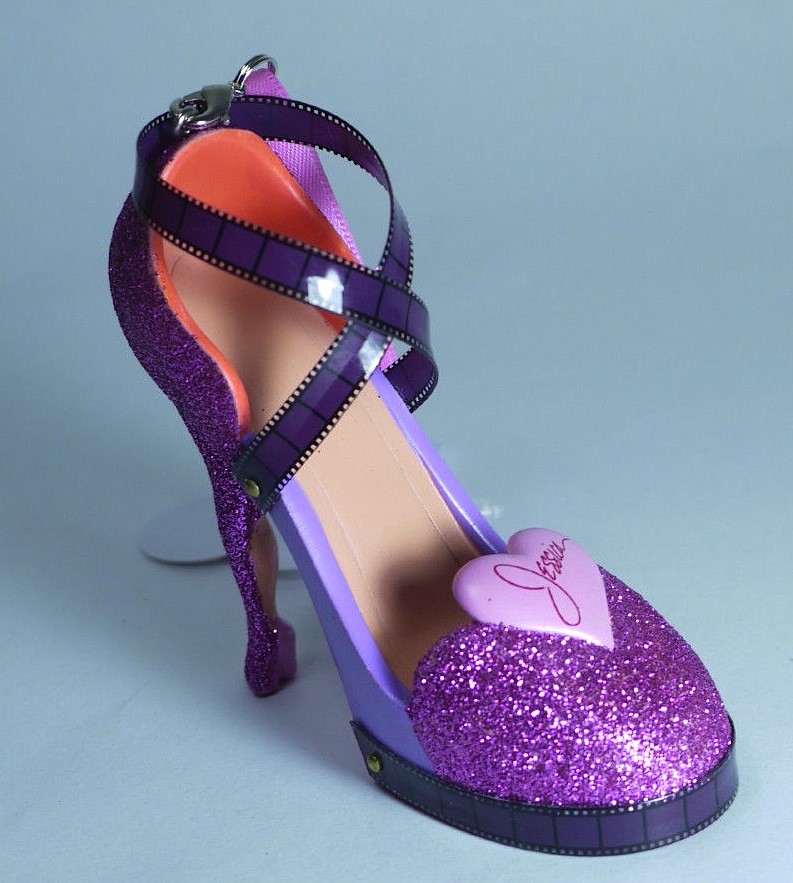 At long last Disney has created a Jessica Rabbit Shoe Christmas Ornament, which would appear to be part of their Runway Shoe Ornament Collection. The shoe ornaments and ear hat ornaments have become fairly popular, and are also made into pins. This shoe was found in Disneyland and has all the similar details as the shoe ornaments from previous years. The Jessica shoe ornament features glitter (which matches the color of Jessica's dress) on the toe box and counter, a pink heart on the topline with Jessica's signature, light purple sides (matching her gloves), a tan insole (Jessica's skin color), orange in the upper lining (matching her hair color), a Jessica Rabbit leg-shaped heel, and purple film strips serving as shoe straps. It's worth mentioning that while the signature is very close to Jessica's original one from her store, it is actually Jessica's park autograph from when she did the meet-and-greet during the Disney Dreamers Everywhere event. The other shoes in the series also have the park version of the characters signatures on the shoe arch. Take an up-close look at some more details.

The Jessica's store once stood in Pleasure Island for a very short time. The D23 Website states that it was opened on December 15th 1990. It was repurposed into the Music Legends store some time in mid 1992. It was located on the corner of Breeze Way and Chandler Row. The neon leg-swinging sign of Jessica became a fixture to the island for many years after the store had gone. There had always been very little information about the store available - for example a floor plan and merchandise layout. With the help of one brief video of the store, and my own memory, I have created a full interior layout of the Jessica Rabbit store, exclusive to ImNotBad.com. 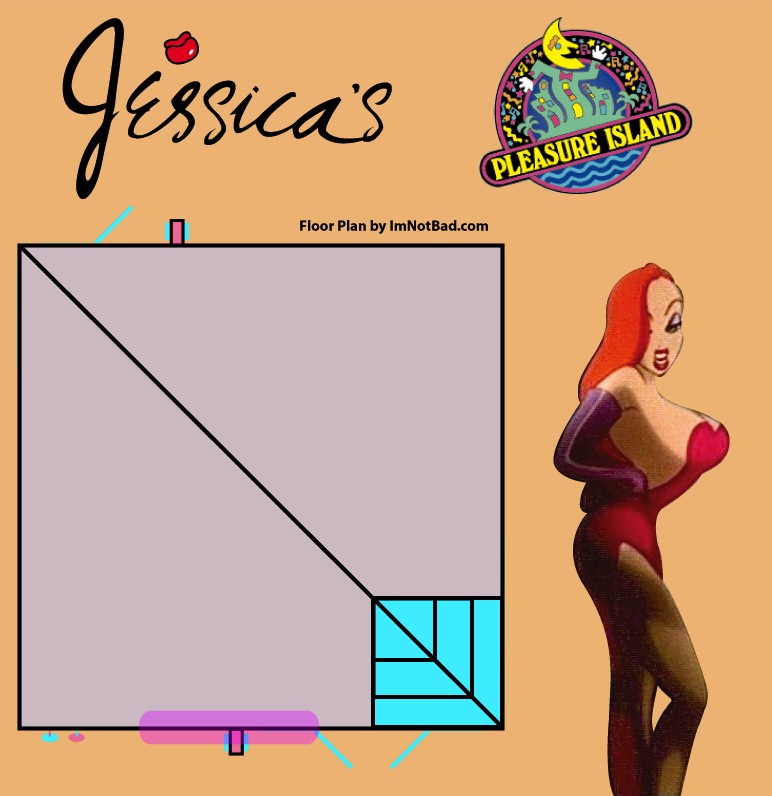 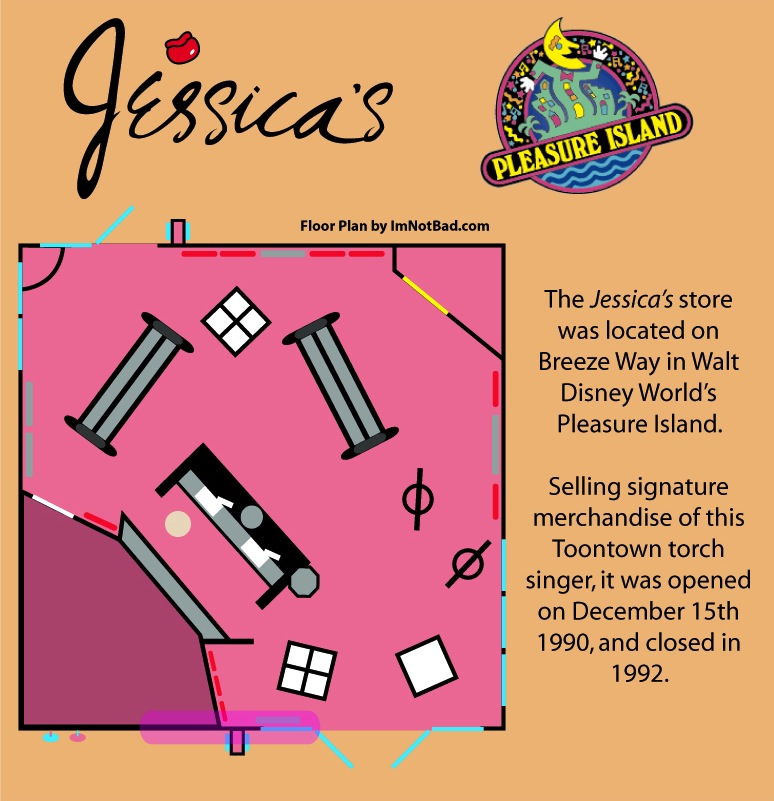 Above you will see the top of the store, with slanted, windowed roof - and another without the roof for the interior layout. For numbered descriptions and a full merchandise layout, click below for a guided tour of the Jessica's store.

A new Baseball Card pin series will be released on Saturday, June 28th 2014 at the Disney Studio Store Hollywood. The series includes Roger Rabbit, Chicken Little and Jessica Rabbit. The art for Jessica appears to be an altered version of the Premium Format Figure Print. Jessica is in that pose but is wearing a maroon colored baseball uniform with the number 45, and is holding a baseball bat. The pin boarder is made to look like a baseball card, with her name below and number in the top left hand corner. These pins are a Limited Edition of 300 and will sell for $14.95 each. 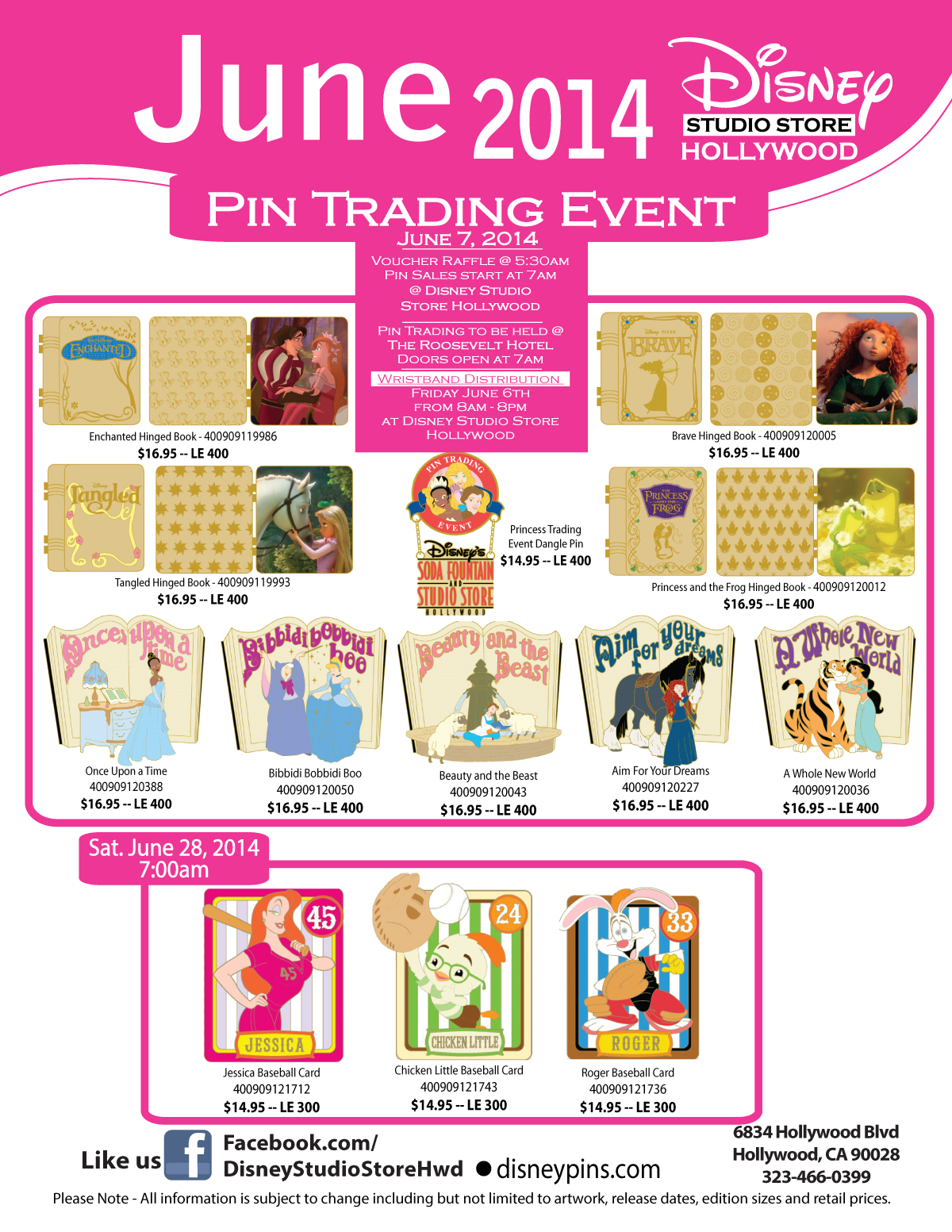 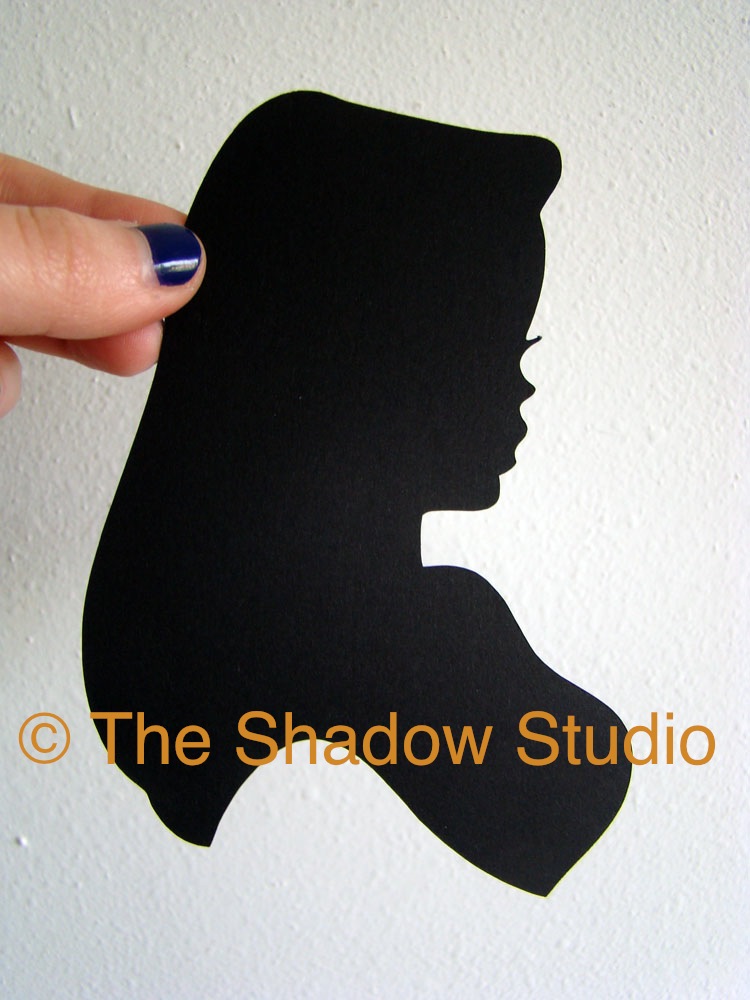 Roger, Jessica and Eddie Valiant are hand-cut as shadow portraits in this fun collection based on our favorite cartoon-noir movie. Julia of The Shadow Studio creates hand cut paper silhouette portraits and pendants. This fantastic Who Framed Roger Rabbit series was made as her tribute to Bob Hoskins and was intended to be only for her own collection. However, the requests kept coming in to put these in her shop for sale, and she agreed.

"This is a hand-cut paper silhouette of Jessica Rabbit. It comes mounted on a 5x7 piece of sturdy white cardstock, ready to frame. These silhouettes look beautiful in an oval frame, or with an oval mat in a rectangular frame.

The silhouette is both cut from and mounted on archival-quality, acid-free paper for longevity. Because each silhouette is cut by hand, each one will be slightly different - but I promise that they will all be beautiful!

Jessica's honey-bunny Roger and his pal Eddie Valiant are also available in my shop. Your silhouette will arrive mounted but not framed." 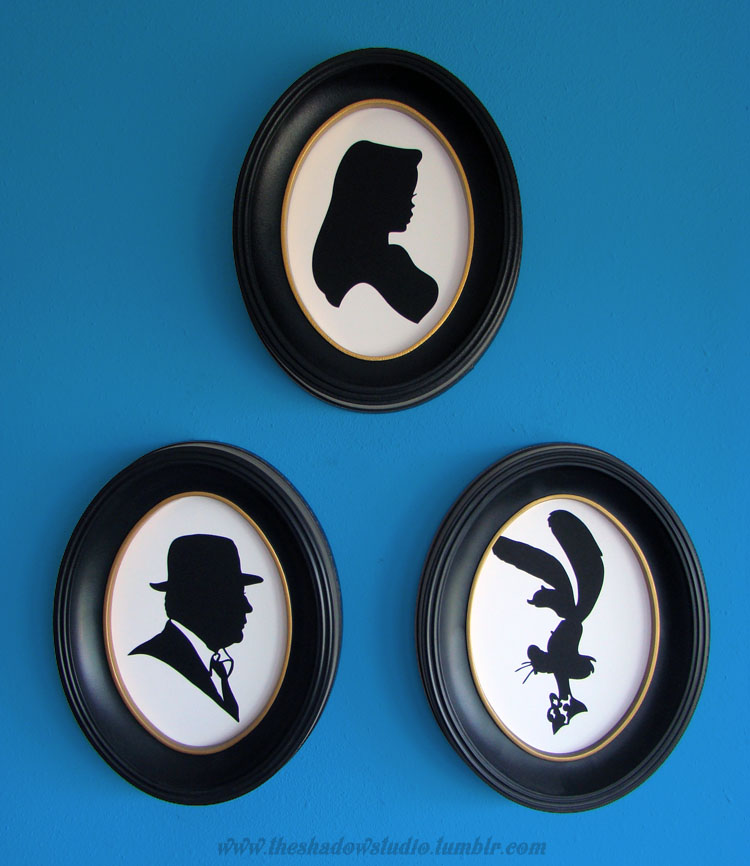 Take a visit to The Shadow Studio's Etsy shop to see more shadow portraits like The Disney Princesses, Charlie Chaplin, Marilyn Monroe and many more!

Part 5: Girl Power
A look at Jessica's creation, her impact on female characters and figure collecting, and the many others who had a hand in making the industry what it is today.

Back in early 2012, a brand new Jessica Rabbit shirt had been released, showing her riding a motorcycle and showing off a lot of curves. Though the image of Jessica was new, the shirt quality (a very thin material which was even stamped with a "Hanes" logo inside) was extremely disappointing at its price point. In summer of 2013, a hat was released with the same image from the t-shirt. Is the quality better than its shirt counterpart? Find out !! 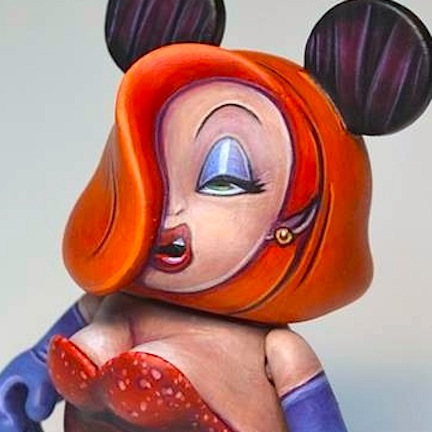 Disney Vinylmation customizers have really been honing their skills as of late. There have been quite a few eye-popping figures which have been spotted on-line and at Disney events. This latest one is by Jared Circusbear - a fully painted, and also sculpted, custom Jessica Rabbit! As of now there has been no official Jessica Rabbit Vinylmation figure released by Disney. Roger Rabbit was released as a larger 9 Inch Vinylmation in 2012. Have a look at this astonishing custom. 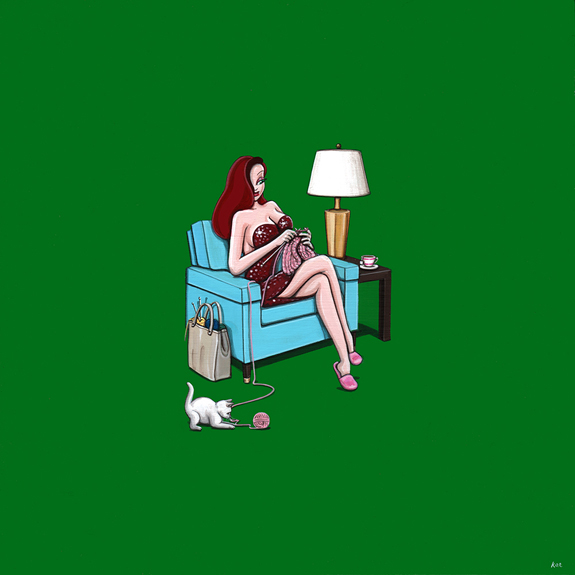 Part 4: The Ultimate "Pin-up,"
Jessica proves popular among pin collectors around the 15th Anniversary of the film.
The Nurses Association Vs. Jessica Rabbit
A certain Jessica pin however is NOT very popular among The Nurses Association and is pulled from sale.
This Item Is Not Available - Disney Pin Collecting
Different types of pins, some Jessica pins from Disney Auctions go missing, and other strange happenings.

Have you seen all the Jessica Rabbit merchandise there is? How about some stuff that never got produced? Here you can see four fantastic puzzle concepts by Len Smith, all dated 1996. There was a Len Smith who worked on animation for Who Framed Roger Rabbit, and these may have been drawn by that same person. Jessica Rabbit merchandise was scarce in the mid 90's, and these puzzles were probably among many great merchandise ideas that were shelved. The first puzzle is from the climactic ending scene of Who Framed Roger Rabbit - with Roger and Jessica tied together as they face the dreaded Dipmobile. 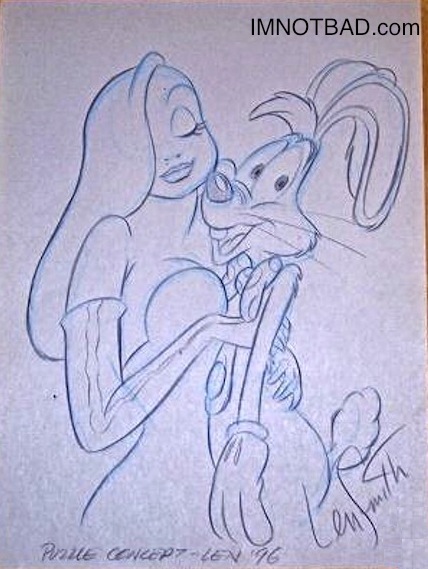 The next one is Jessica on stage at the Ink and Paint Club. It's not the usual scene depicted of Jessica parting the curtain, but rather of her shimmying down the wall. Another end scene moment is used for the puzzle concept with Jessica giving Roger a big hug. Last we have a scene from one of the Roger Rabbit cartoon shorts, Roller Coaster Rabbit. Jessica Rabbit has been tied to the tracks by the dastardly - Droopy Dog!? 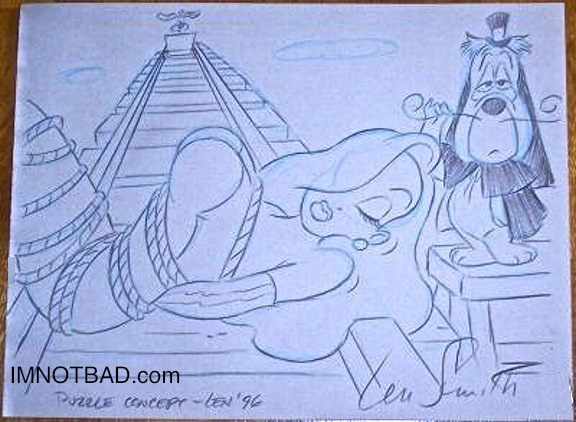 All the artwork is very character-accurate and looks beautiful. Jessica is definitely at her curvy best, and Len Smith didn't skimp on her at all - perhaps that had a little more to do with these not being made. Either way, it's sad that these puzzles didn't get created.

The Imagination Gala Trading Pin Event will take place September 5 - September 7 in Epcot's World ShowPlace. The purple carpet will be rolled out for this magical event. There will be a number of exclusive pins released which will celebrate some of Disney's best movie moments. One set is the Most Quotable Quotes featuring certain Disney characters delivering their famous line. Jessica Rabbit will be part of this set. Other pins in this set are Grumpy, Ursula, Zurg, Lilo and Stitch, and Roz. 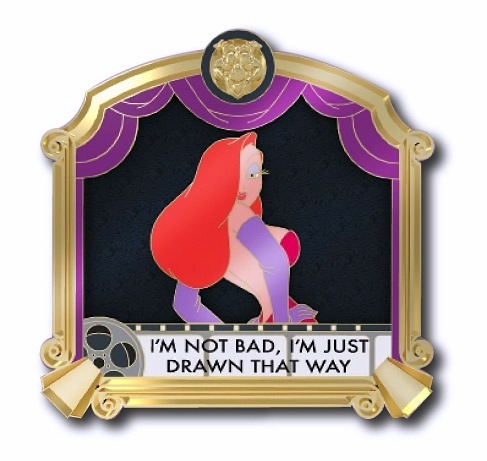 Jessica is framed in gold with a purple curtain and a sculpted Figment head at the top. The background will be a pearlized black fill. Under the quarter shot of Jessica will be a film reel with her memorable quote, "I'm not bad. I'm just drawn that way." This will be the first ever pin to feature this quote. A button with this quote was released in 1988. Other pins have a modified version such as, "I'm just drawn to chocolate", and "I just cruise that way." This boxed set will sell for $109 and is a Limited Edition of 250 - available only at the Imagination Gala Event. 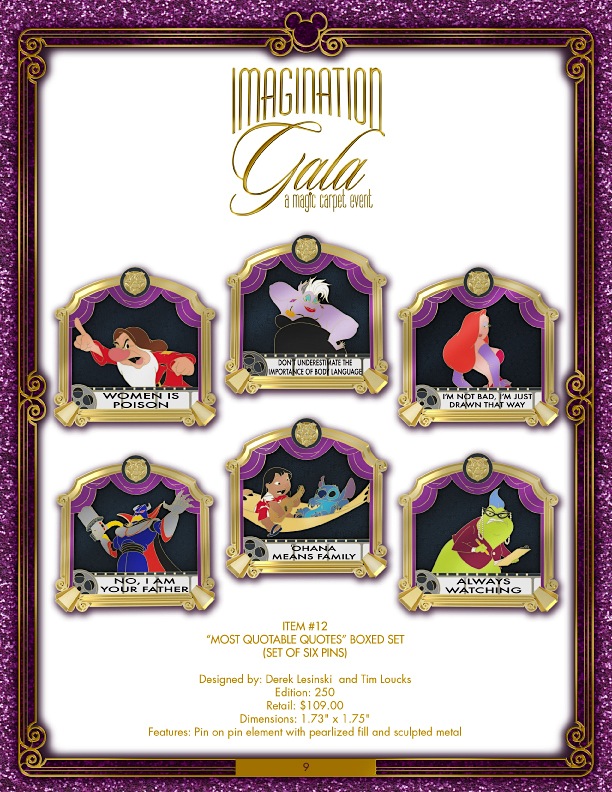 Part 3: The TOON Rides Again - Roger Rabbit's Car Toon Spin
Even though Roger and Jessica had been disappearing, we were lucky enough to get this fantastic ride. Originally to be a two-story ride, Car Toon Spin opened in Disneyland's Toontown and is still a very popular attraction. Only a sporadic amount of merchandise was available throughout the years until the 15th Anniversary of the film.