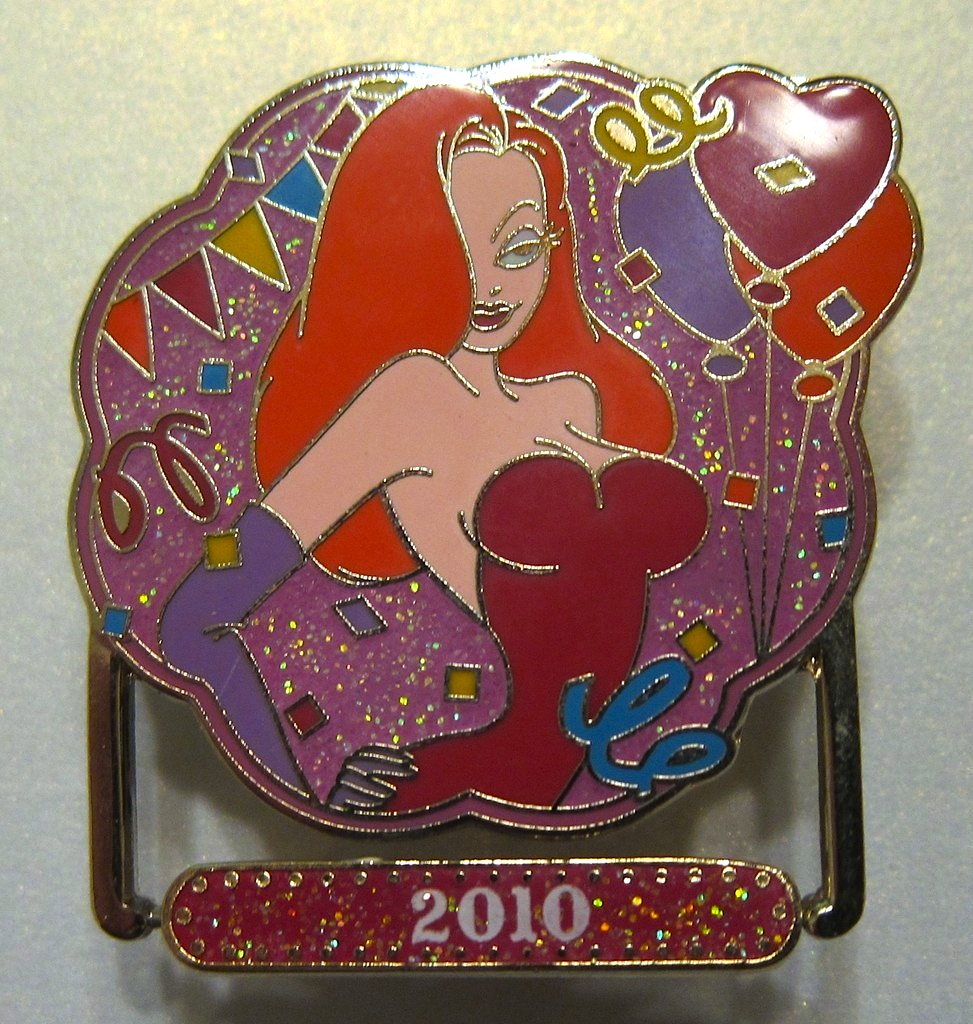 This Happy New Year Jessica 2010 pin was released December 26, 2009 at the Disney Soda Fountain and Studio Store. It sells for $12.95 and is a Limited Edition of 300. This pin features glitter fill and a hinged sign below which reads "Happy New Year" on one side and "2010" on the other.

The Totally unOfficial Toonography of Jessica

Jessica Rabbit is becoming a much more popular character to the Disney family. In an effort to preserve the character, this six part documentary slideshow will reveal some information about Jessica, her creation, merchandise and history.

Part One: The Beginning and A "Tail" of Triumph and Tragedy. How it all began and why Jessica and co. disappeared so soon after their big debut.

Part Two: Jessica's - Signature Store of a Toon Diva - If you never had the chance to visit the Jessica's store during the very short time it was open, this presentation takes a look back into its history. See what merchandise was available at the Jessica's store, original drawings of rare unproduced items, and insight from the creator of the neon Jessica sign himself, Mark Marderosian.

Part Three: The TOON Rides Again - Roger Rabbit's Car Toon Spin - Even though Roger and Jessica had been disappearing, we were lucky enough to get this fantastic ride. Originally to be a two-story ride, Car Toon Spin opened in Disneyland's Toontown and is still a very popular attraction. Only a sporadic amount of merchandise was available throughout the years until the 15th Anniversary of the film. Bonus: OUTTAKES - I mess up now and then.

Part Four: The Ultimate "Pin-up," (Jessica proves popular among pin collectors around the 15th Anniversary of the film) The Nurses Association Vs. Jessica Rabbit (A certain Jessica pin however is NOT very popular among The Nurses Association and is pulled from sale) and This Item Is Not Available - Disney Pin Collecting (Different types of pins, some Jessica pins from Disney Auctions end up missing, and other strange happenings).

Part Five : Girl Power - A look at Jessica's creation, her impact on female characters and figure collecting, and the many others who had a hand in making the industry what it is today. 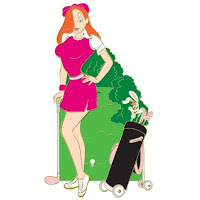 The Father's Day Series features one pin with Jessica. It was released on June 08, 2009 on the Disney Shopping website. It sells for $14.95 and is a Limited Edition of 250. Jessica Rabbit is adding some va-va-voom to Father's Day! She is on the golf course in a short maroon skirt and hat. She holds a golf club and there is a bag next to her showing one club with a plush Roger Rabbit head cover. The backdrop is a golf course with bushes, and the grass on the field is a clear green fill. 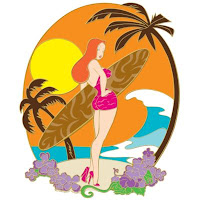 The Surf Series Jessica Rabbit pin was released June 01, 2009 on the Disney Shopping website. It sells for $14.95 and is a Limited Edition of 250. Jessica is ready to surf the waves on this beautiful beach. She is wearing a dark pink clear filled bathing suit. The surfboard is brown clear filled and you can see the designs in the metal through the fill. The background of the pin is a circular beach scene, with clear orange filled sky and clear blue filled water. She is also surrounded by purple flowers and palm trees.

Roger Rabbit Sequel on the way

MTV caught up with director Robert Zemeckis, who told the site he is interested in revisiting Who Framed Roger Rabbit.

Talk of a "Roger Rabbit" sequel has been going on since the film originally hit theaters, but now it appears closer than ever. Speaking to MTV News in April, they asked him if he thought of making a fourth Back To The Future movie, but Zemeckis mentioned his interest in another project.

MTV: Are there any of your old projects that you've been thinking about revisiting in some way? Obviously, you did three Back to the Futures, is there a way to revisit that in some form, like motion capture, performance capture?

Robert Zemeckis: Well, I'll tell you what is buzzing around in my head now that we have the ability, the digital tools, and performance capture, is I'm starting to think about Roger Rabbit.

MTV: Please do it. Is it based on a old idea or a new idea?

MTV: Will it look similar to the methods you used last time, or will you use totally new methods?

When asking for more, Zemeckis only said,

“I can’t give you more details.”

Back in December of 2007, Roger Rabbit producer Frank Marshall also expressed interest in another movie but since then, no more details had come fourth, making it seem like just talk. Robert Zemeckis had been the most vocal about this impossibility and imporbability of a Roger sequel, so this is very promising news.

What a surprise this was. Jessica Rabbit (played by Jessica Biel) appeared on Saturday Night Live! 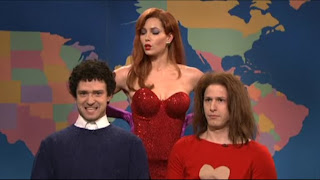 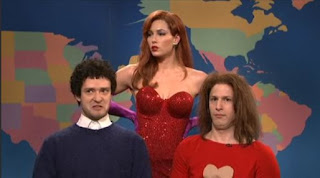 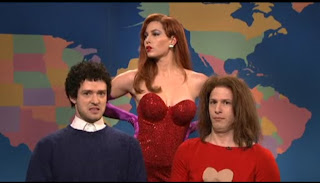 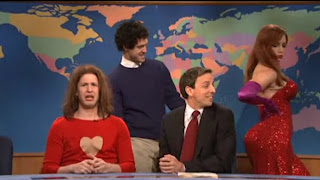 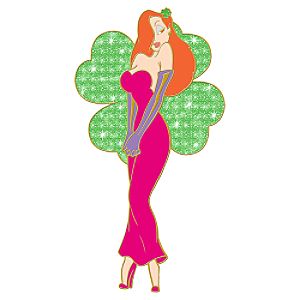 The St. Patrick's Day Series Jessica pin was released February 23, 2009 on the Disney Shopping website. It sells for $14.95 and is a Limited Edition of 250. Jessica Rabbit celebrates St. Patricks Day in this series pin. The giant shamrock behind Jessica is glitter filled. She also has a small shamrock in her hair. 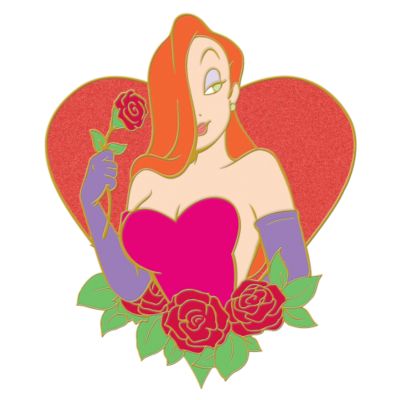 This pin is part of the Valentine 2009 Series released on January 26, 2009 on the Disney Shopping website. It sells for $14.95 and is a Limited Edition of 250. Jessica Rabbit holds a rose in this romantic Valentine's Day pin. The heart background features a red clear fill.

The Disney Mystery Art Series includes one pin of Jessica Rabbit. It was released January 20, 2009 on the Disney Shopping website. The set sells for $44.95 and the Jessica pin is a Limited Edition of. 900. Jessica Rabbit is a work of art. She is posed like a roman statue, wearing a white toga and standing on a pedestal. Since this pin was part of a mystery pin box set, you don't know what characters you'll receive. 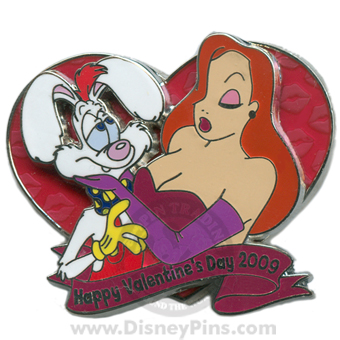