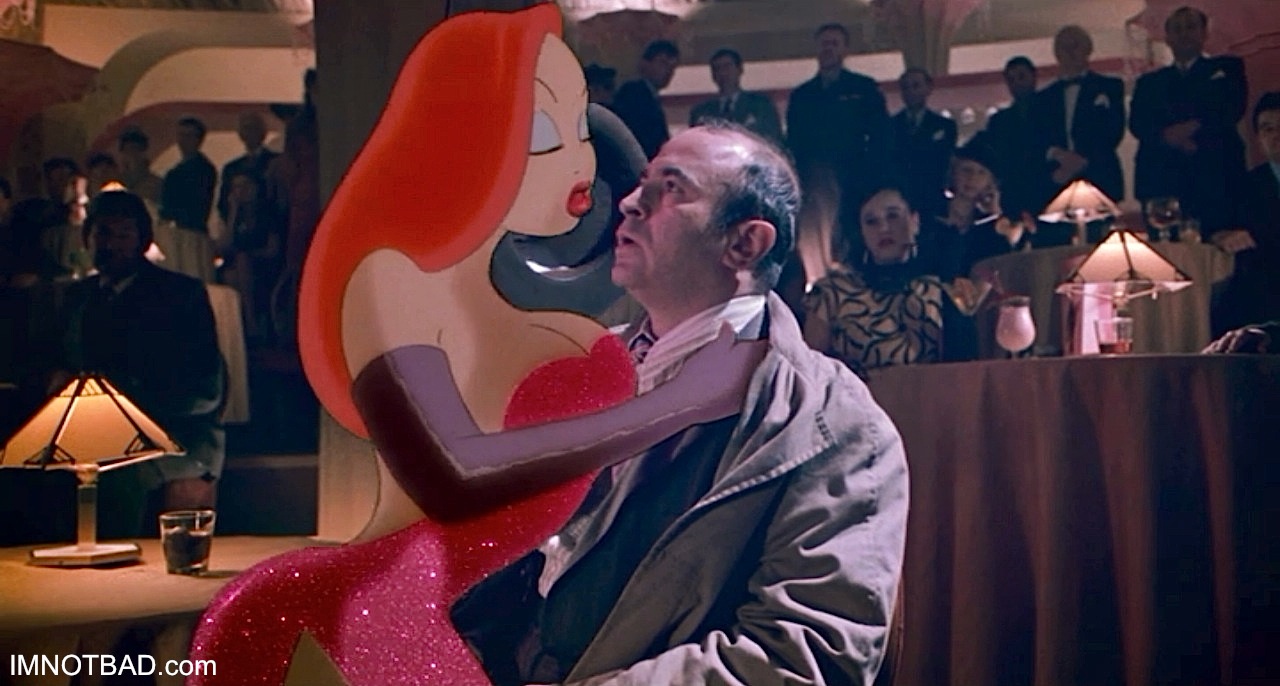 The most beloved detective in Toontown has passed away. Actor Bob Hoskins, who played Eddie Valiant in Who Framed Roger Rabbit, has died at age 71. In 2012 Hoskins announced that he would be retiring from acting after making public his battle with parkinson's disease. 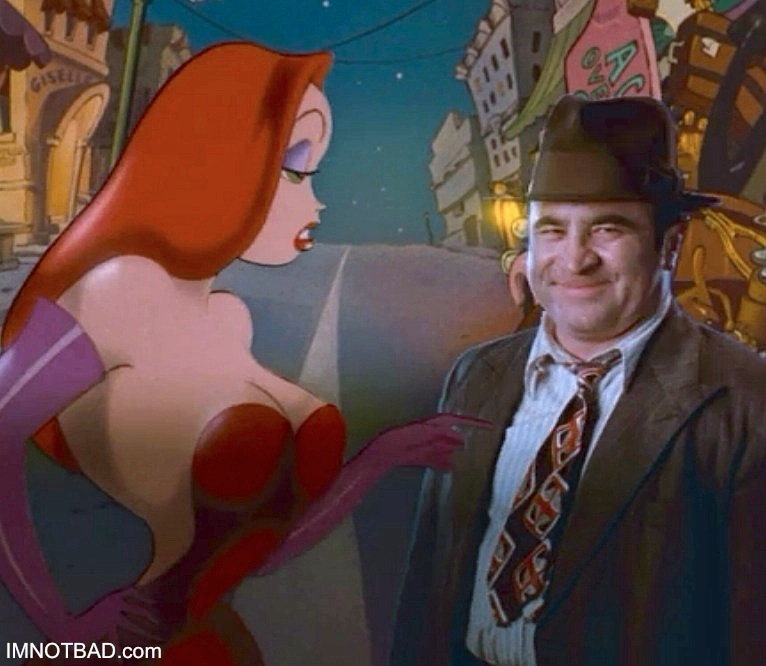 All over the internet there is an overwhelming outpouring of emotion from celebrities and fans alike for Bob Hoskins. People are noting his varied film achievements over the years. He starred in a colorful assortment of films, such as Hook, Mona Lisa, Mermaids, The Inner Circle, Super Mario Brothers, Hollywoodland, Snow White and the Huntsman and Pennies from Heaven. He set a new standard for actors when taking on the role of Eddie Valiant, making us fully believe toons and humans really can exist in the same world together.

In reality, Bob Hoskins was acting against nothing for that film, relying on the direction of Robert Zemeckis (and his own imagination) to make his work believable. This was well before the age of digital technology, and his performance was the important key to making the movie succeed. That it did - and he will always be remembered for his outstanding performance in this classic cartoon-noir movie, as well as his many other wonderful films. 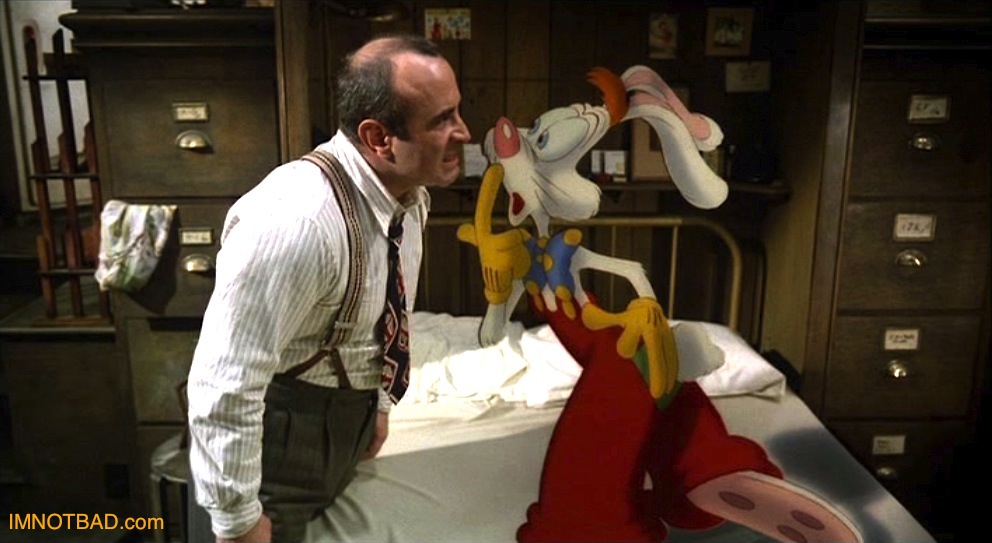 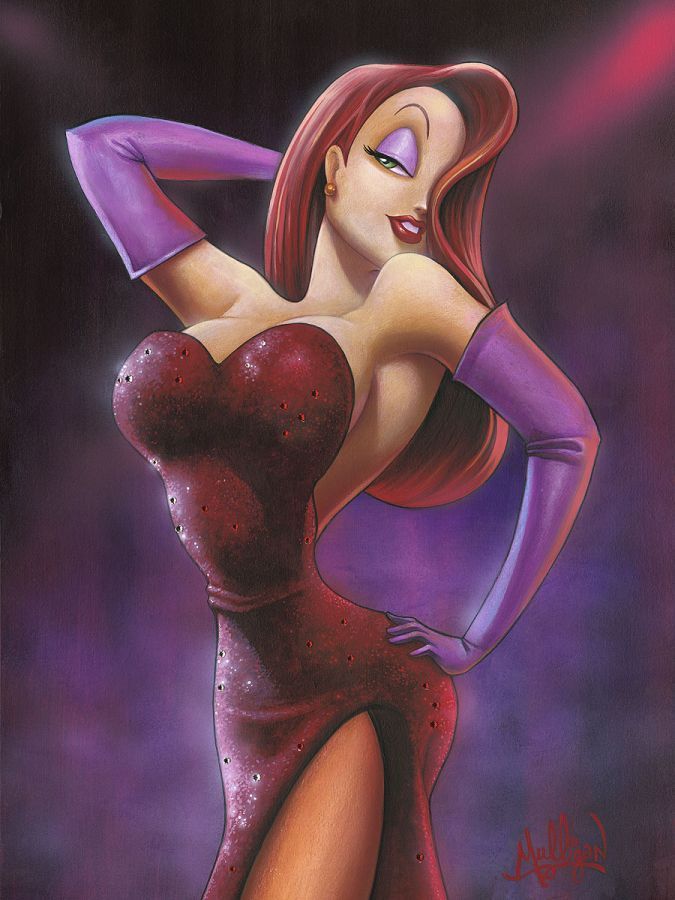 Jessica Rabbit artwork by James Mulligan is now available for sale through World Wide Art and a few other fine art shops. The is an extremely high end piece that will cost you $450. The painting of Jessica is based off the art by Stanley "Artgerm" Lau for the Premium Format Figure. This painting also features crystal embellishments on Jessica's dress and is titled Girl in Red. Below you can see when it was on display at the 2013 D23 Convention. 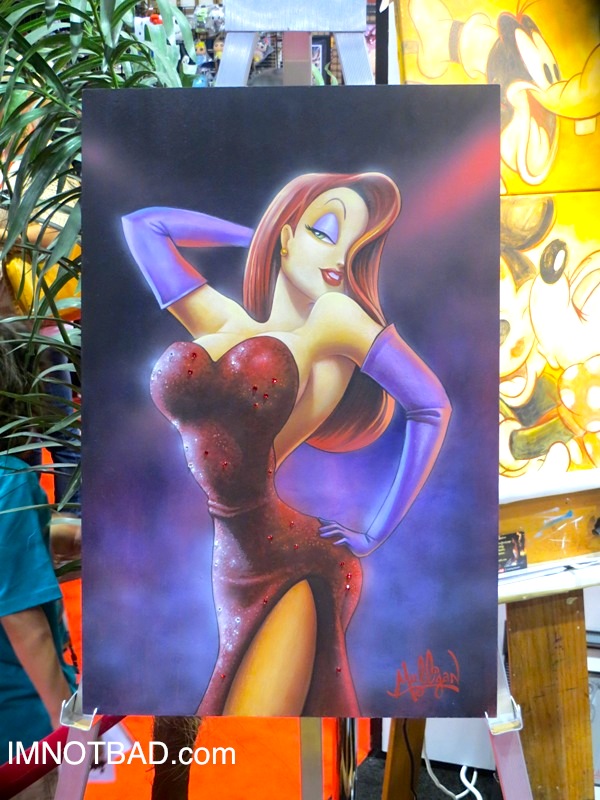 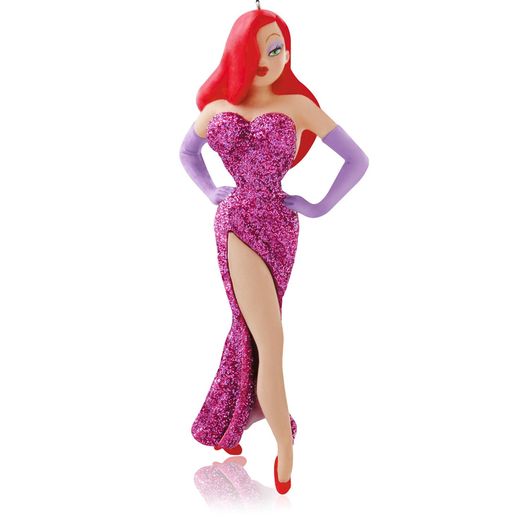 Hallmark has released their official 2014 Keepsake Dreambook, with a preview of all the Christmas ornaments to be released later this summer. Jessica Rabbit was on display before last Christmas, putting us through this long wait until next season - but she is now officially on the Hallmark Website. The ornament is designed by Keepsake Artist Joanne Eschrich. It will be available later this summer and will sell for $17.95. This ornament is also marked as a Gold Crown Exclusive.

Site Description:
What it is:
This toon stole the scene as the siren singer who was suspected of framing her stuttering husband, Roger Rabbit. Hang her from your tree to add a whole lot of spice to your holiday festivities.
Christmas tree ornament.
Artist crafted.
1.56" W x 4.25" H x 1.81" D

Part 2: Jessica's - Signature Store of a Toon Diva
If you never had the chance to visit the Jessica's store during the very short time it was open, this slideshow will take a look back into its history. See what merchandise was available at the Jessica's store, original drawings of rare unproduced items, and insight from the creator of the neon Jessica sign himself, Mark Marderosian. 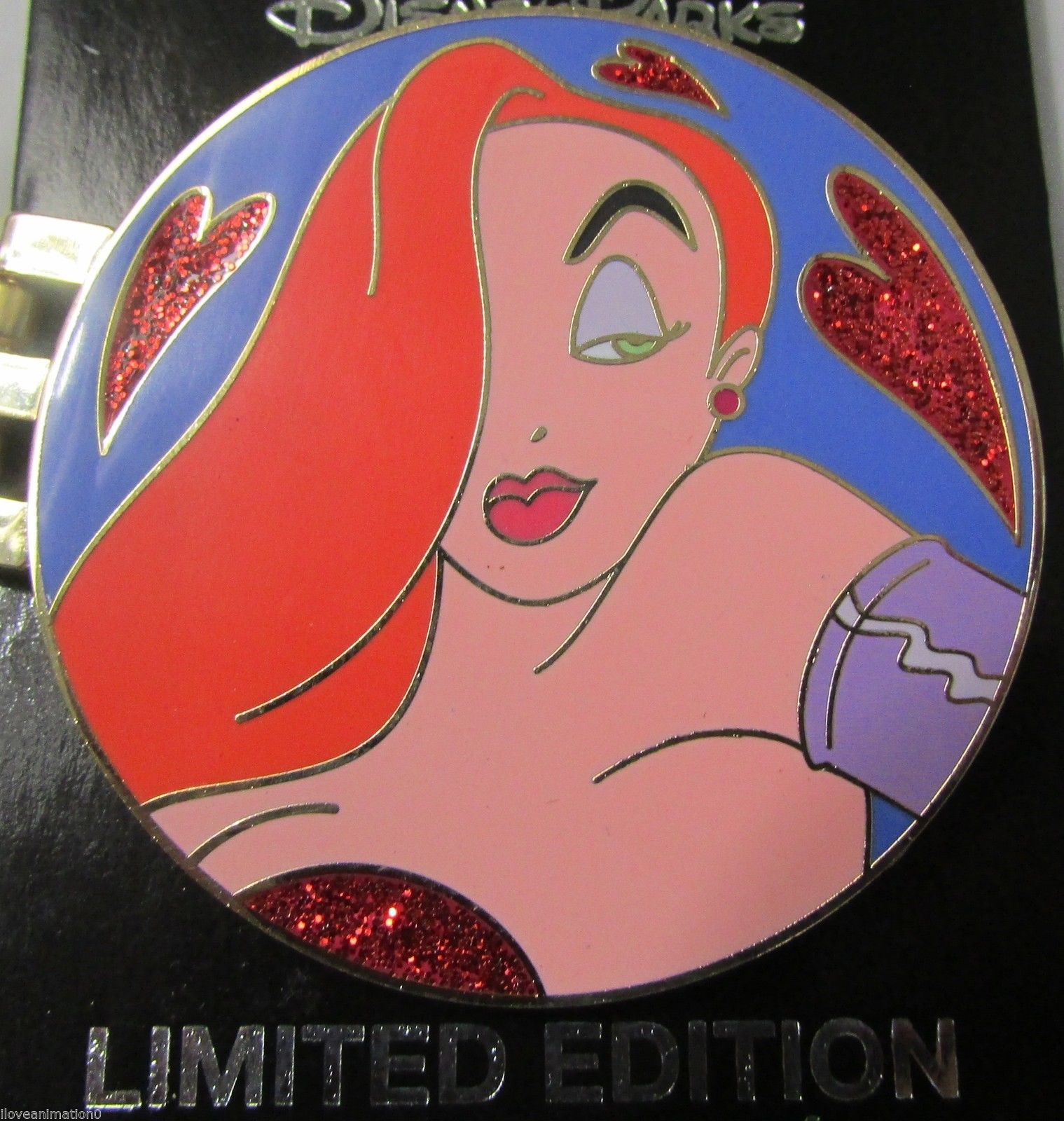 The Pin Trading Night event was held on Tuesday, April 22nd in Walt Disney World. Disney artists were on hand to sign pins and Vinylmation figures. The Walt Disney World Resort Pin Trading Night featured Elsa from the Disney animated film, Frozen and Jessica Rabbit from the Disney animated film, Who Framed Roger Rabbit. The Jessica Rabbit Trading Night pin was created by Alex Maher. It is a Limited Edition of 750 and sold for $15.95 each. This circular hinged pin has Pin Trading 2014 embossed on a gold ring with a gold "TN" in the middle. There is a clear pink fill in between the letters, giving it a stained glass appearance. You can see the image of Jessica through it. When opened, Jessica Rabbit is in a quarter shot. The pose is from the movie during her Ink and Paint Club scene. The background is blue and she is surrounded by three red glitter filled hearts. Her dress is also red glitter filled. The inside of the gold ring is debossed with Walt Disney World. Should this Jessica Rabbit pin still be in stock after 30 days of release, it will be available for order through Merchandise Guest Services. 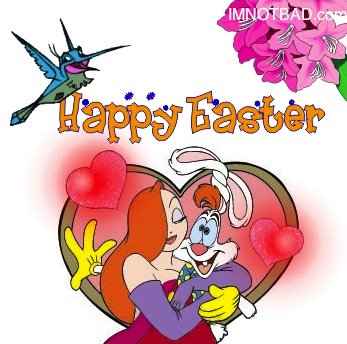 Part 1: The Beginning and A "Tail" of Triumph and Tragedy
How it all began and why Jessica and company disappeared so soon after their big debut.

As the site continues to grow, I will be periodically adding Jessica Rabbit merchandise, reviewed or not, to this new catalog section for a more complete listing of Jessica items. 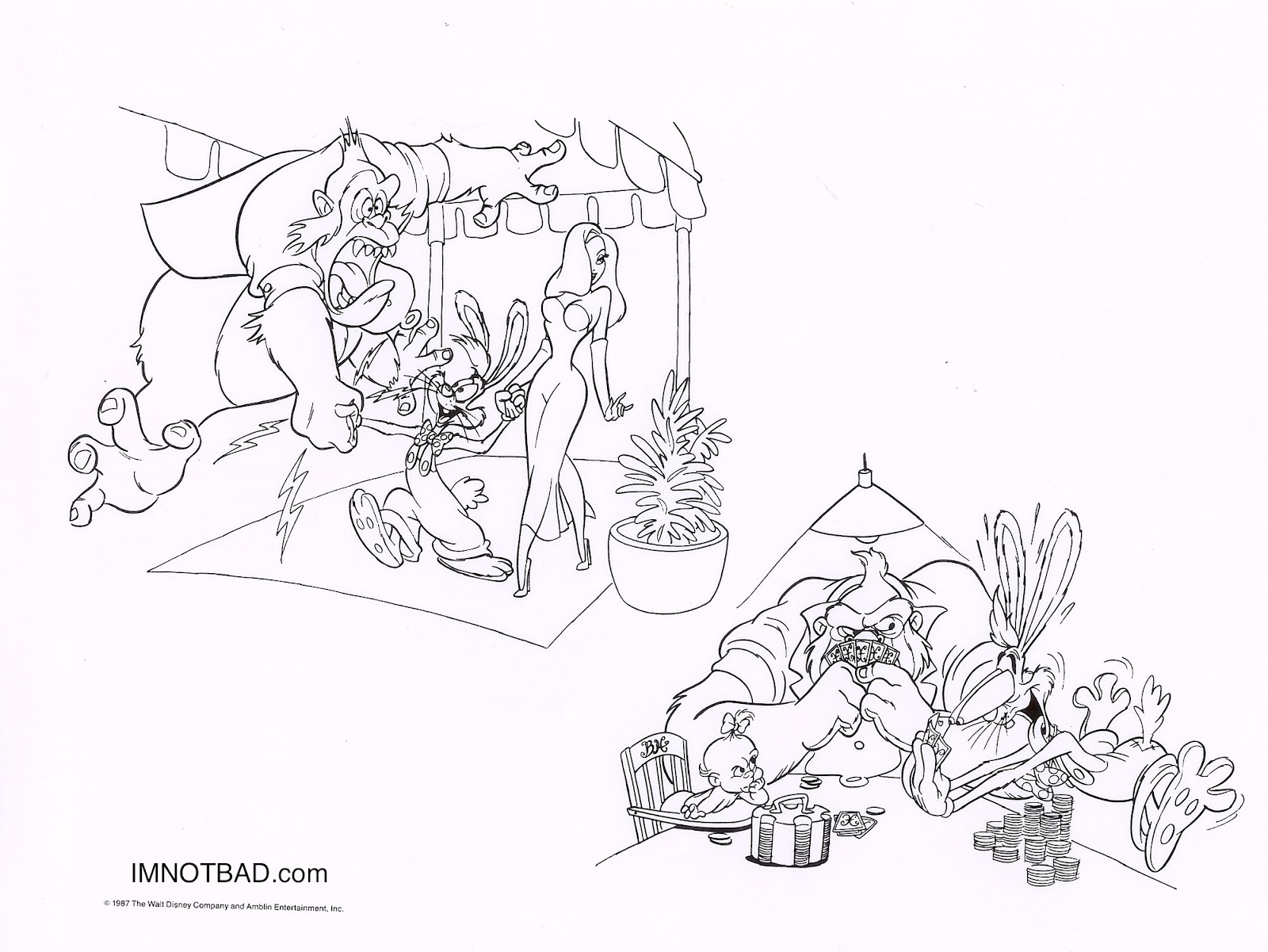 Take a look at some original line artwork of Jessica Rabbit, Roger, Baby Herman and Bongo the Gorilla created before the movie was released. These photos were used for trading cards, games, coloring books and other merchandise.

From interning at Disney MGM Studios, to Electric Tiki Design, Tracy M. Lee is a very accomplished artist. He worked on Roger Rabbit short films Rollercoaster Rabbit and Trail Mix-Up and when he went on to Electric Tiki, the opportunity came about to create statues of some characters from the Disney library. It was a perfect match and his Jessica mini-maquettes are spot on! Read up on his exclusive interview with this site. 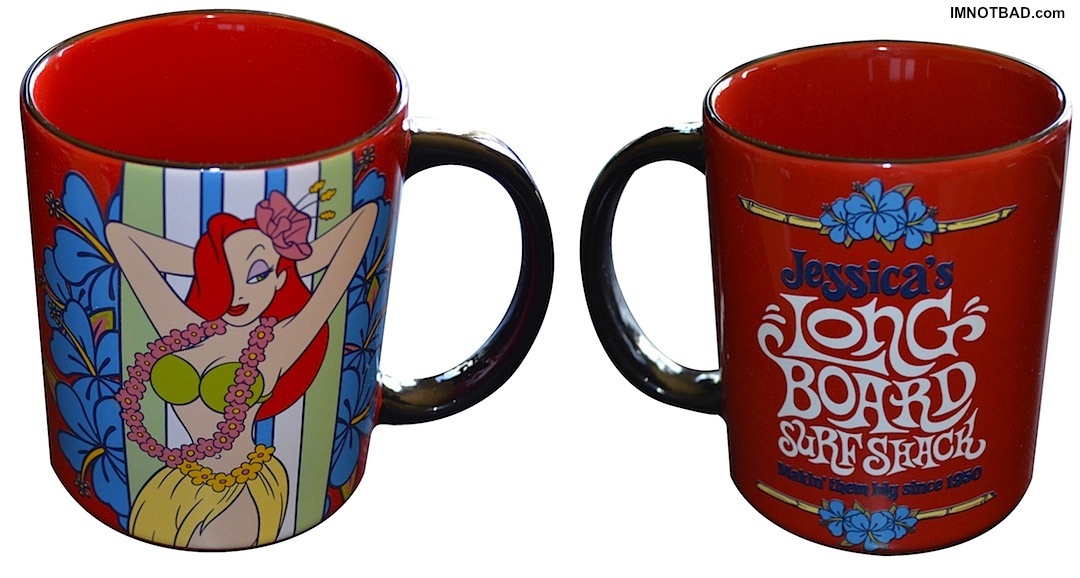 A new Jessica Rabbit mug has been released in Disney parks. This image was used way back in 2003 for pins, shirts, hats and eventually a towel. The mug is red and the handle is black. Jessica is in her green bikini top and grass skirt with flower lei. She's standing in front of a large surfboard and large blue flowers. The other side reads Jessica's Longboard Surf Shack - Makin' them big since 1950 which is surrounded by bamboo and flowers. 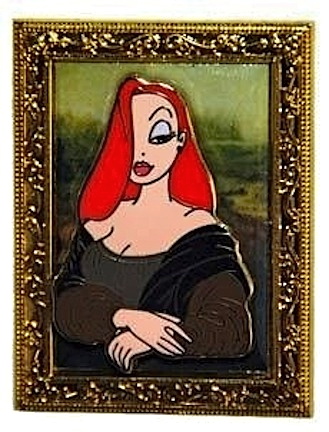 Our Jessica Rabbit is a real work of art - but here's even more proof! Jessica Rabbit as the Mona Lisa was released as a pin at the Walt Disney World Museum of Pin-tiquities Event on June 26, 2009. Reenacting the classic portrait by Leonardo da Vinci, Jessica is posed with that telling grin and dressed just as the Mona Lisa appeared in the painting, she's even "framed" in gold. Below are two of the early artworks of the pin not seen since before the event. 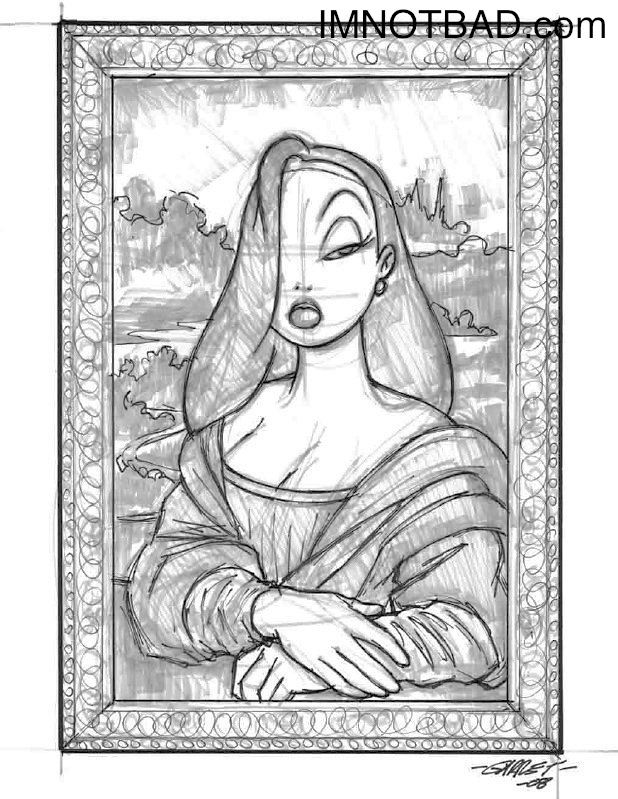 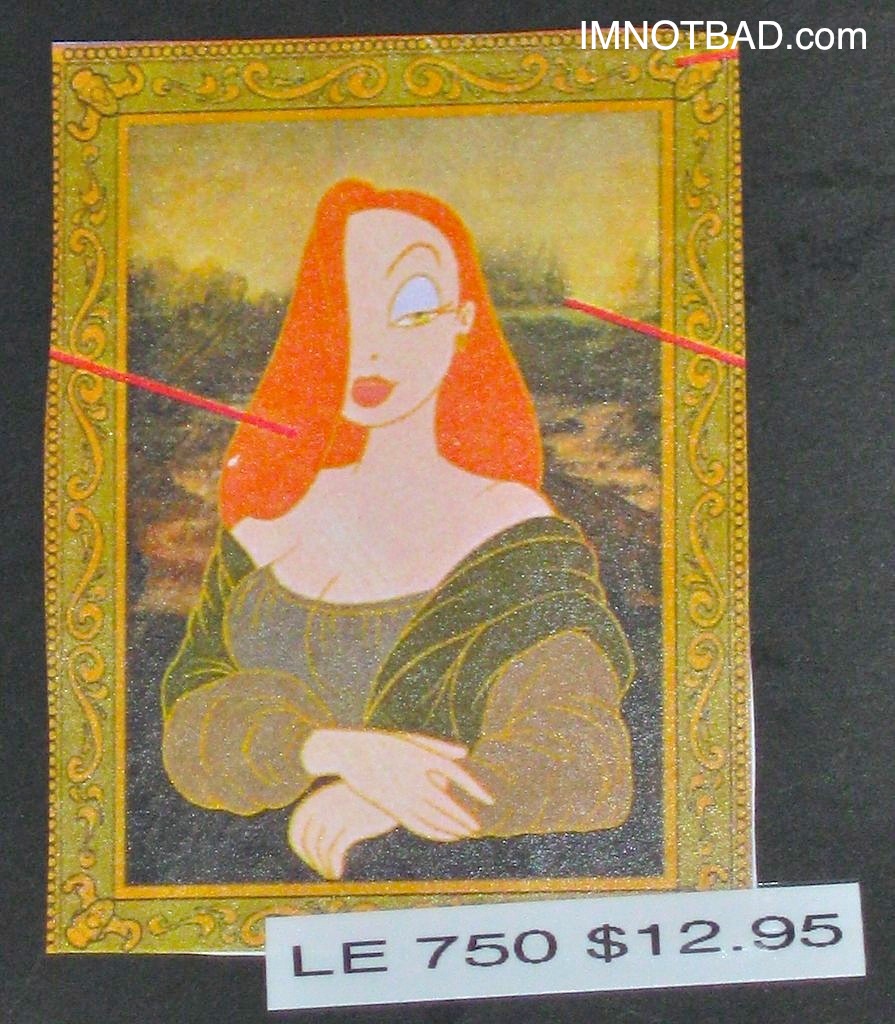 It's a video that never gets old for me. It's very short but sweet! Video of the Jessica Rabbit store, Jessica's, and more of Pleasure Island in 1991. 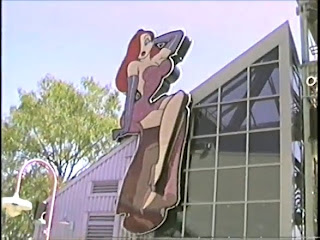 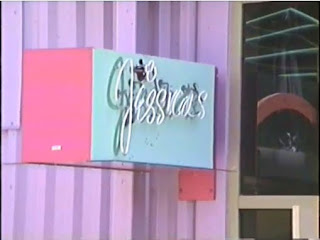 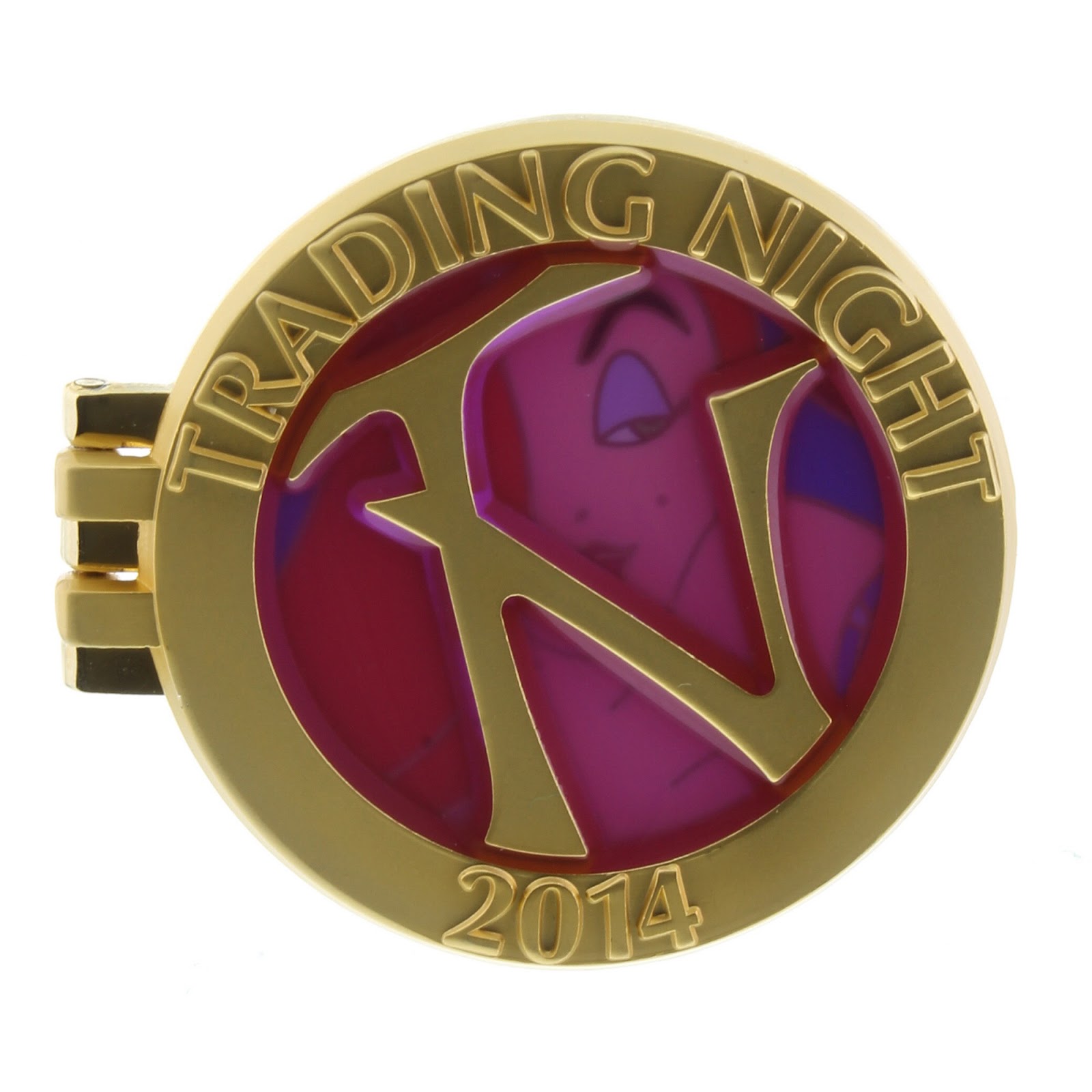 There is an official release date for the WDW Pin Trading Night Jessica Rabbit pin - scheduled for April 22nd. It will be a Limited Edition of 750 and sell for $15.95 each. This circular hinged pin has Pin Trading 2014 embossed on a gold ring with a gold "TN" in the middle. There is a clear pink fill in between the letters, giving it a stained glass appearance. You can see the image of Jessica through it. When opened, Jessica Rabbit is in all her glory in a quarter shot which is taken right from the movie. The background is blue and she is surrounded by three red glitter filled hearts. Her dress is also red glitter filled. This is different that the pin which was on display a while back where the hearts and dress were only filled pink. The inside of the gold ring is debossed with Walt Disney World. Should this pin still be in stock after 30 days of release, it will be available for order through Merchandise Guest Services. 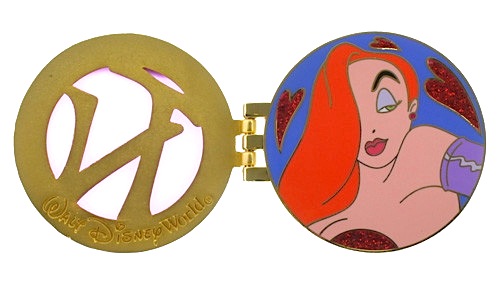 If you are visiting the Resort on Tuesday, April 22nd, join us for Trading Night from 6p.m. – 9p.m. in the ESPN Sports Complex inside the Grill. Meet avid and novice traders, make friends, and share stories about your collections." 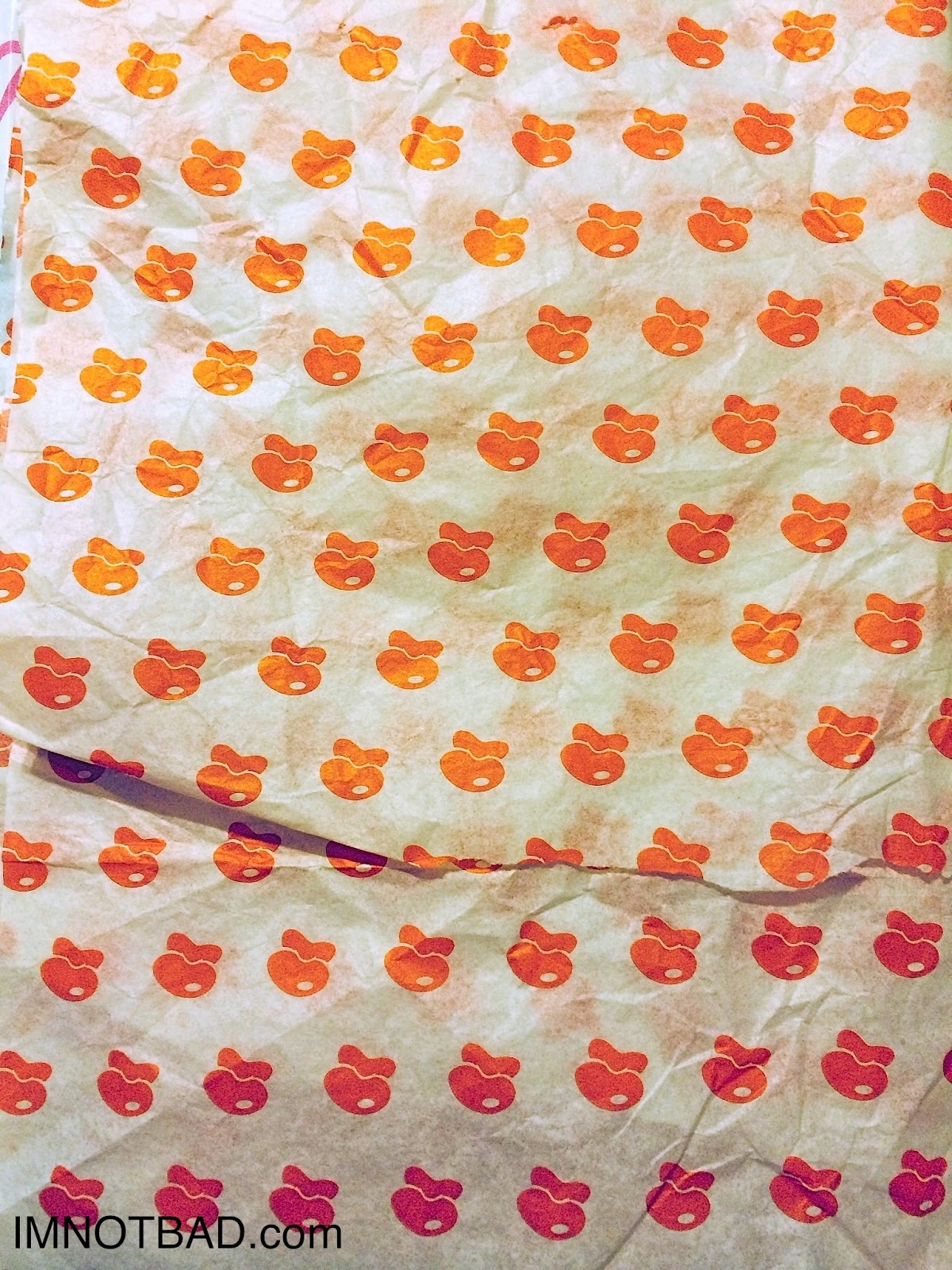 This is no joke, the manifest for the Jessica Rabbit store has been found! A friend of this site, Anthony, has been good enough to share the full merchandise list for the Jessica's store (even the special Jessica Rabbit kiss tissue paper used to wrap glassware). Here for the first time ever, exclusive to this site, is the full list of items from the store in June of 1991.