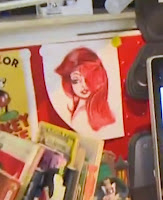 Last June, a video was released giving people a Very brief look inside the Disney Store Headquarters. While the main focus of the video was about the newest Disney feature, Brave, sharp eyed observers were trying to spot any clues laying around that might be visible in the video. It was this video (and another image found on the Disney Store Blog taken during the filming) that lead someone to find the tiniest hint of the Lady Tremaine 17 inch doll. So I revisited this video to see if I could spot anything - anything at all. The video was fast and full of jump-cuts. It was hard to see much of anything. There was one shot that caught my attention. A Disney artist was sitting at his desk as the host of the video tore through the place, grabbing at anything that wasn't nailed down (wouldn't we all!) Pinned up on the board behind his computer was a sketch of a red haired - someone. Take a look for yourself. Could it be Ariel? Could it be Jessica? Could it simply be a sketch the artist created not intended for any merchandise purpose? Judge for yourself. 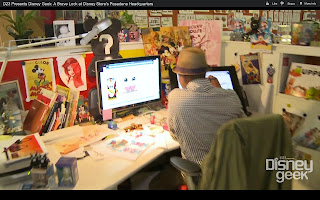 As children, I think we all hoped our toys could magically come to life. The Disney movie Toy Story entertained that very notion. Woody, Buzz Lightyear, and a comical bunch of other toys became living objects who had lives of their own when real people weren't looking. This was not the first time this concept was tried for a movie, but by far the most successful. The Christmas Toy was made by Henson Studios in the mid eighties where toys came to life when left alone. It also dealt with one new toy of the group not knowing she is a toy at all. These characters though were all Henson puppets. There was a fully animated movie from 1977 (directed Who Framed Roger Rabbit's lead animator Richard Williams) titled Raggedy Ann and Andy: A Musical Adventure, which first used the very same plot. One character, named Babette, was a beautiful french doll who was shipped to the playroom and has no idea she's a doll at all. Sound familiar? The history of Jessica Rabbit's look can be traced to this character. With her cherubic face, pouty lips, and big purple eyelids - one can definitely see some similarities to Jessica.

Here is the final production photo for the Jessica Rabbit Cookie Jar by Westland Giftware (right) due out later this summer. 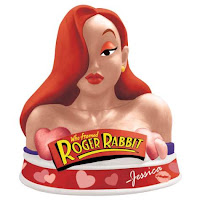 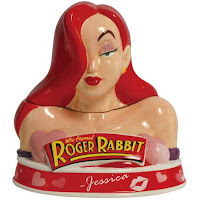 Are you hot on the trail of a voluptuous cartoon diva? Always looking for the newest ( or oldest ) Jessica Rabbit merchandise? Check out the ImNotBad Kaboodle page to keep up with all the latest released, and old or rare finds from around the internet. The link will also be in the Follow That Dame! box to the right for easy access. Disney Store merchandise, eBay finds, Etsy creations - get it all. 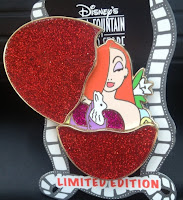 Released at the Disney Soda Fountain and Studio Store today, March 23rd, is the Jessica Easter Egg Pin. The pin is shaped like an egg. The fill to the front is red glitter. The egg is hinged and opens to reveal Jessica Rabbit inside. Jessica is surrounded by flowers and his holding a small white rabbit. The pins sold for $16.95 and are a Limited Edition of 300.

For a few years, Disney partnered with eBay and formed their Disney Auctions store. You had the opportunity to auction on things like posters, park props, and high end limited edition merchandise. They also began their own Purchase It Now Store, which would let you buy items instantly. One of the specialized items made especially for the site was the Jessica Rabbit Limited Edition 250 Vase. Take a look... 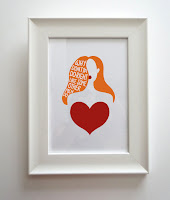 Here is a very special piece of Jessica Rabbit inspired original art. It is the "Do Right" typography print by Kerry Wheeler. She created it as part of her Heartbeats Challenge, where she drew one heart per day from February 1st to the 14th - and one of those just happens to be our favorite cartoon diva. The heart is appropriately placed as Jessica's top half. Within her orange hair you can see the lyrics, "Why don't ya do right, like some other men do." This is a cute and fun piece of artwork perfect for anywhere, any room, any place. You can see more by visiting her Etsy Page. 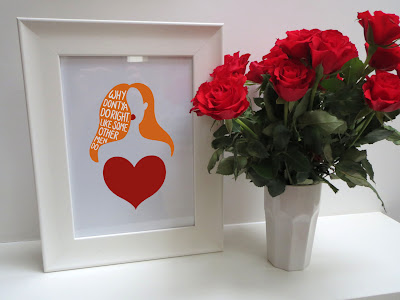 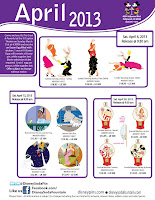 April is going to be a big month for Jessica Rabbit pins. Not only can we expect the Surprise April Calendar Pin - but a New jumbo series is coming. On April 6th at the Disney Soda Fountain, get ready for the Dancing Jessica Rabbit Jumbo Pins. The first is Jessica Rabbit Dancing Swing - with Roger! They are in 1950's style clothes. Jessica has on a pink poodle skirt and saddle shoes. Roger is in a black suit. The next pin is a real show stopper! If you ever wondered what Jessica Rabbit would look like if she made it on Dancing with the Stars - here's Jessica dancing the Paso Doble. Jessica is wearing a flowing, ballroom inspired black dress with red top - which appears might be filled with glitter for the final look. The last pin is Roger and Jessica Rabbit dancing the Waltz. Jessica is being "dipped" by Roger. She's wearing her usual pink dress which again might be glitter filled, though she is not wearing her purple gloves. The pins will be a Limited Edition of 300 and sell for $18.95 each. 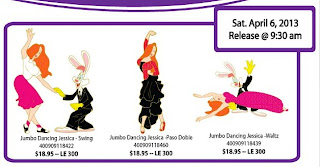 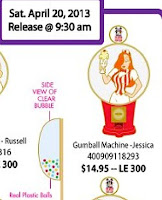 The last pin is something quite interesting. There is a new Gumball Machine series featuring Russell from UP, Mickey and Minnie, Cheshire Cat, and Jessica Rabbit. The pins are shaped like a gumball machine, with the Soda Fountain logo at the top - and the character in the center. They are unique in that they will have a domed bubble that will be filled with fake little multi-colored gumballs. They will be released at the Disney Soda Fountain on April 20th, are a Limited Edition of 300, and sell for $14.95 each.

A new pin featuring Jessica Rabbit was released on March 16th at The Disney Soda Fountain and Studio Store. Jessica is sitting on a stool, enjoying an ice cream soda. The pin is a limited edition of 300 and comes with the purchase of a Pin Trader's Delight ice cream sundae.

The Jessica March Calendar Surprise Pin was released on March 14th at The Disney Soda Fountain and Studio store. It is a limited edition of 300 and sold for $16.95 each. The front of the calendar is the same image from the previous pins, but the glitter fill is green. On the inside is Jessica Rabbit standing in front of a big four leaf clover and a pot of gold. There are more clovers floating around her in green and gold - and she is holding a gold one.

Who Framed Roger Rabbit In 60 Seconds


If you haven't seen Who Framed Roger Rabbit, or are in the mood for a good parody, check out this hilarious video by Michael Whaite. 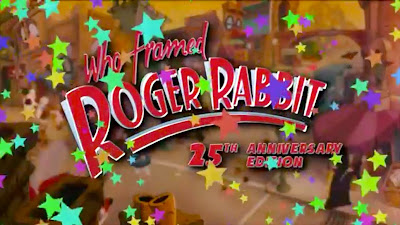 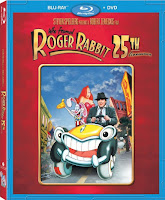 Just a reminder that the Who Framed Roger Rabbit 25th Anniversary Blu Ray DVD was released today, March 12 2013. You can buy your copy almost anywhere. The three cartoon shorts are now digitally remastered for this release, and the movie will be in crisp, Blu Ray quality. The special features on this DVD are the same as the 15th Anniversary Edition that was released in 2003:

Buy It Now From: 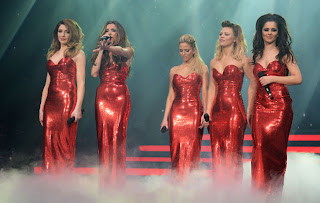 All girl group, Girls Aloud, launched a reunion tour last weekend and made a stunning debut in very Jessica Rabbit-style dresses. Girls Aloud started in London for part of their Ten: The Hits Reunion Tour. The Jessica Rabbit looks is still quite a hit with many celebrities daring to try to look.

You've heard the news folks, Who Framed Roger Rabbit is celebrating it's 25th Anniversary with a reunion screening of the film on Thursday, April 4, 7:30 p.m. at the Samuel Goldwyn Theater in Beverly Hills, California. The Academy of Motion Picture Arts and Sciences has reported:

"Our panel of “Roger Rabbit” filmmakers will relive their adventures in creating a film that remains a delightful tribute to animation’s golden age even as it set a new standard for what the medium could achieve. Director Robert Zemeckis and associate producers Don Hahn and Steve Starkey will be joined by actress Joanna Cassidy (Dolores), voice actor Charles Fleischer (Roger Rabbit), supervising animator Andreas Deja and screenwriter Peter S. Seaman following our return to Toontown. Digital restoration provided courtesy of the Walt Disney Studios."

Hopefully there will be more to report on as we get closer to this event - Stay Tooned!

It was announced on Steve Thompson's Tumblr page that he will be attending the 2013 D23 Convention. The convention is held every other year and is packed full of Disney this and Disney that - park announcements, guest stars, panels, and upcoming merchandise. Thompson, the evil genius behind the Disney Designer Collection, stated:

"While it is still top secret what we have in store, I will again be attending this coming August. As soon as I can let you know more I will post it here on my Tumblr page first."

The post was accompanied by photos from the 2011 D23 Convention, in which his Designer Princess dolls caused mass hysteria, panic attacks and temporary loss of bladder control. Once the dolls made their way for sale on the Disney Store website months later, what occurred in the following weeks made history as dollMAGEDDON. A year later, 2012 offered up some of Disney's most memorable female Villains for the Designer line, and Disney tried to make amends for the previous year by producing a higher edition size of dolls - therefore eliminating a dollMAGEDDON repeat. While this new information doesn't confirm or deny a third Designer Collection, we are left knowing that something IS in store for this year.

The Jessica Rabbit Hollywood Key pin was released at the Disney Soda Fountain and Studio Store on March 2nd 2013. It's different than a regular pin as it is fully sculpted metal rather than a flat enamel filled pin. It sold for $12.95 each and is an Limited Edition of 300.