What a year this was for fans of Who Framed Roger Rabbit! The movie celebrated a special 25th Anniversary this year and proved that it's still a favorite after all that time has passed. In March, a Blu Ray version of Roger Rabbit was released, and although it was the same as the 15th Anniversary DVD, it still got a lot of attention from people who had not seen the movie in a long time. There were also airings of the movie on Cartoon Network and The Hub which had people buzzing on Twitter and showing their affection for the film.

The Victoria & Albert Museum in London showcased their exclusive Hollywood Costume Exhibition, featuring costumes from movies like Star Wars and The Wizard of Oz. Here it was discovered that costumer Joanna Johnston created a real dress for animators to use as reference on Jessica Rabbit's movements. The costume was not on display but there were scenes of Jessica playing on a screen in the exhibit. 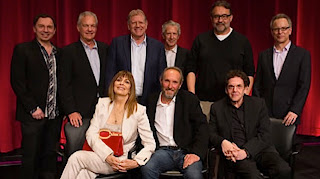 Who Framed Roger Rabbit: A Toontown Reunion was an event held by The Academy in Beverly Hills, California. Special guests included cast and crew from the film. After a screening of the film, they all joined together on stage for a panel to discuss working on the project and what it took to get this movie to the big screen. Disneyland held it's own special screening, and the Making Roger Rabbit: 25th Anniversary screening and panel at Comic-Con was a big hit with a much more in depth panel discussion which included animators from the film and the voice of Roger Rabbit, Charles Fleischer.

In October, The Academy honored the animation director of Who Framed Roger Rabbit, Richard Williams , with his own special event and exhibit featuring an extensive catalog of art. Williams spoke to the audience in detail about his work on many different projects, including Roger Rabbit. The creator of The Simpsons, and stars from The Walking Dead were on hand to watch the artist discuss his work and celebrate his impressive career. 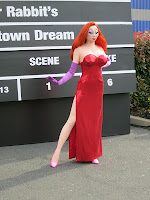 Certainly one of the most discussed happenings this year was Jessica Rabbit's Park Debut. Jessica appeared for the first time in a Disney park in Paris for the Disney Dreamers Everywhere event, which included special shows in every Disney park around the globe. While it was a huge surprise to see Roger, Eddie and Jessica included, many people weren't pleased with Jessica being a masked character, which lead to a bigger debate. Like it or not, this was at least one park appearance by Jessica, and even if there are changes made, people would like to see Jessica walking the parks in some form or another.

This year also marked my ten years of posting on Jessica Rabbit news. It's been a long time, but it all seemed to go by rather fast. The site reached over half a millon pageviews and there were more posts this year than ever. I also got around to making my first ever customized Jessica Rabbit dolls, which came out a lot better than I had anticipated. While the site was in full swing covering all the news, there was a very exclusive interview for ImNotBad.com with doll artist Robert Tonner, who gave us some great information on creating his Jessica Rabbit doll.

There wasn't any shortage of new Jessica Rabbit collectibles either. Britto announced their new Jessica bust which was released in the summer. Westland Giftware produced a series of Jessica Rabbit Cookie Jars and Salt and Pepper shakers. A Jessica's Speedshop hat was released. A new Sketchbook Ornament series was created by artist Steve Thompson, which included the first ever ornament of Jessica and Roger Rabbit together. The Jessica Rabbit Halloween pins saw a big comeback at the Disney Soda Fountain, and a year long calendar pin series kept Jessica popping up every month.

The D23 Convention was held this year and a Jessica and Roger Rabbit statue by Costa Alavezos was created as a 25th Anniversary piece. The convention also offered special items like a Jessica Rabbit Magnetic Bottle Opener, a painting by Manny Hernandez and a print of all the Disney redheads by Amy Mebberson.

The Disney Designer Collection was revealed to be a series of Fairytale Princesses this year, so while we don't have Designer Jessica Rabbit again, a new series of Pop! Figures by Funko was confirmed to include characters from Who Framed Roger Rabbit. Also to come is a Jessica Christmas ornament from Hallmark. So there's still some more fun stuff on the way, even after the big anniversary has passed. Thank you for visiting the site and I hope enjoy all the info, photos and Jessica Rabbit news. Stay Tooned!