The 25th Anniversary Of Who Framed Roger Rabbit 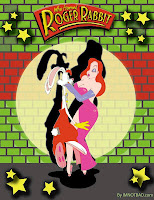 In the early summer of 1988, the crowds were lined around the block to see the new critically acclaimed movie of the year. It was a project that seamlessly blended live actors with cartoon characters on a scale that had never been seen before. It featured the most popular cartoon characters from different companies together in one feature - and even in one scene. The technical achievements of the film were evenly matched with an entertaining and imaginative story - both of which kept audiences fully invested in the "realness" of the characters. It was talked about, praised and enjoyed by both children and adults. All these years later, even with the breakthroughs of the digital age, this movie still stands the test of time. It continues to be appreciated by the newer generations and has maintained its loyal fans over the year. This is the:

Back in the very early 1980's, Disney started taking the steps in bringing a new kind of movie to the big screen that would be like no other. The story was Who Censored Roger Rabbit by author Gary K. Wolf. It was set in a world where cartoon comic-strip characters are real and live side-by-side with humans. These "toons," as Gary Wolf coined, spoke in word balloons which would hover around the characters heads - and then disappear, melt or whatever the appropriate mood would call for. In the book, the toons could create a doppelgänger of themselves (an exact copy) which would often serve as their stunt double. Roger Rabbit, a comic strip star, gets caught in the middle of a murder mystery. His beautiful wife, Jessica, was not very much in love with Roger - and Roger himself was "fond of the drink." Detective Eddie Valiant was hired to help solve the chaos. The entire story plays out as a feast for the imagination and is richly painted with colorful characters and cartoony gags, making it an entertaining read. Disney obviously saw the potential in this story, but couldn't get the project off the ground.

The reactions to early test animation proved promising, and though the characters and storyline went through various changes, everything started to take shape. Paul Rubens, better known as Pee Wee Herman, originally came in to do voice work on Roger. Jessica Rabbit looked quite different, with a toned-down look and similar qualities to Bette Davis. A character named Lieutenant Cleaver was set to be the cartoon detective nemesis of Eddie Valiant's. It was an ambitious project, and sadly, it began to stall. When Michael Eisner became the CEO of Disney in 1984, the movie finally had legs with his support - and full production started in 1985. New footage showed the more final look of Roger interacting with an Eddie Valiant stand-in (which can be seen on the Special Edition DVD). Test Animation of Jessica, still looking fairly different than we came to know her, was also successfully made. Soon the movie was in full swing, with filming starting in 1986. Robert Zemeckis was selected as the director when Steven Spielberg came on the project as the executive producer. It was Spielberg's influence that convinced Warner Brothers and other companies into lending their characters (Bugs Bunny, Droopy Dog, Betty Boop) to a Disney feature film. However, with a rising budget and intricate effects, the movie almost didn't make it. Somehow the Disney magic kept it going, and director Robert Zemeckis kept true to his vision of the film. 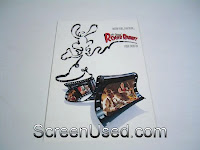 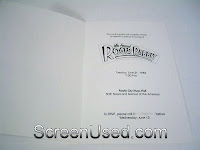 At this point, the animation process could begin. Richard Williams, a talented and accomplished artist, was brought on as the director of animation, with a huge team of artists adding their expertise as well. The animation process lasted over a year. Each frame of animation was hand drawn - as this was before the days of using computers for assistance. All of the shadow and highlight effects were created by hand as well. The continually rising budget had this moving teetering on being cancelled many times. Much was riding on this film, as by this point the Disney Animation department had been suffering with one underperforming movie after another. The company was attempting to recapture the magic of classic Disney animation quality. At that time, they were also up against Don Bluth (a former Disney employee who left to start his own successful animation company) and even threats of a hostile takeover.

"Who Framed Roger Rabbit” is the kind of movie that gets made once in a blue moon, because it represents an immense challenge to the filmmakers: They have to make a good movie while inventing new technology at the same time... In a way, what you feel when you see a movie like this is more than appreciation. It’s gratitude. You know how easy it is to make dumb, no-brainer action movies, and how incredibly hard it is to make a movie like this, where every minute of screen time can take days or weeks of work by the animators. You’re glad they went to the trouble."
--Roger Ebert, 1988

When the film debuted, it was an instant success. It was released to the public on June 22, 1988, and was the summer blockbuster of the year. It was soon followed by a deluge of merchandising and Roger Rabbit fever! Everywhere you went, Roger's face was looking back at you on cups, shirts and toys. Disney, along with Steven Spielberg's Amblin Entertainment, made a star out of Roger Rabbit. They seemed to accomplish the impossible by bringing cartoons and humans together in one motion picture. The art, animation and technical aspects of the film all blended together into an extremely entertaining movie with very memorable characters. This movie begins what is knows as the Disney Renaissance, which revitalized the company's animation division followed by successful classics such as The Little Mermaid, Beauty and the Beast and Aladdin. Who Framed Roger Rabbit earned six Oscar nominations and won three of them - Best Sound Effects Editing, Best Visual Effects and best Film Editing. Richard Williams was given a Special Achievement Award from The Academy for Animation Direction and Character Creation. 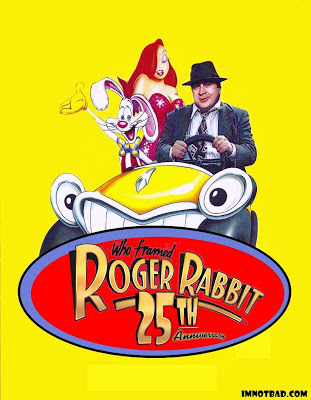 To think that it has been 25 years since the debut of this movie is strange, it feels almost like yesterday to me. I saw the movie in the theater a few times and was captivated from the very beginning. Quite obviously, the character of Jessica Rabbit has stuck with me all this time later and continues to be my favorite cartoon character. I thank everyone for visiting and enjoying this site. Jessica Rabbit continues to be an important part of movie and cartoon history. All this time later, even in the newer age of high tech graphics and CGI characters, people still enjoy Who Framed Roger Rabbit - it has never gotten old.