While the issue of fake/counterfeit/scrapper Jessica Rabbit pins has been quite a problem for some years now, it is not something I have ever addressed on this site in detail. Since this is A Jessica Rabbit website, I'd be remiss if I did not discuss this issue with Collectors and Jessica Rabbit fans alike. While sadly there are no authorized experts on the subject of authentic Disney Pins, there are notable differences in the real versus fake pins. Some of these pins often sell for a lot of money, so I think it would be beneficial to examine at least two different pins to compare.

I'll start off with the differences between counterfeits, scrappers and fakes. Counterfeits are pins made using the same mold of the original after Disney's edition size is ordered. After the original production, some molds are not destroyed and new "unauthorized" pins are created which are not part of the original edition size. The counterfeiting of pins has gotten so good that it's very hard to tell the real from the counterfeit now, but there are often signs that it is a counterfeit when you compare pins side-by-side. A scrapper pin is something a little different. When pins are produced there can be some pins which might not meet company standards (maybe the color is off or there is a pit in the enamel) and they are supposed to be discarded or "scrapped," but for whatever reason they are not. So while it is an official pin, it's supposed to have been thrown out. It's hard to go by that standard as there are often blemished or imperfect pins that slip though and are sold, thus making "scrapper" more of a dirty word - along the lines of fake. Fakes are another story. These kinds of pins are complete forgeries using a real Disney pin to recreate a mold and make new pins, passing them off as originals. This also has gotten so good it can be hard to spot a fake - but there is often more evidence of a fake upon closer inspection. However, these forged pins are usually of highly sought after or rare pins which bring in a lot of money.

I do believe the Disney Company has made attempts to stop this problem, and it shows. They have designed different patterns to the backs of the pins, added small logos and info, created holograms, and have printed code numbers all in an effort to authenticate a genuine pin. While the more rare, Limited Edition pins are cautiously scrutinized for authenticity, the less expensive and give away pins like Hidden Mickey's have been plagued by unauthorized pins. 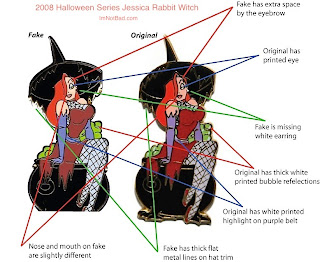 The two pins I'm using are the 2008 Halloween Series Jessica Witch and the 2003 Jessica Rabbit Twirling Hair. While some pins have subtle differences, like the Halloween pin, others are more obvious, like the Twirling Hair. The 2008 Halloween Witch Jessica is a favorite of mine. It's unfortunate that this most sought after pin is now being faked. If you look at a close up of the photo, you can see all the differences marked between the fake on the left and the original on the right. 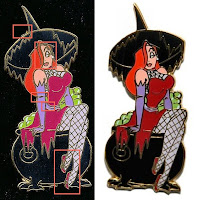 It's worth mentioning while it was easier to spot this as a fake because of the missing white printing, there are others appearing with the printing that also appear to be fake when examining the metal closer. While the pin on the left here seems to be legit because of the white printing, look closer at Jessica's shoes. You can see how different the metal is on the pin from the left as the one on the right - the original. There is also the absence of the white highlight on Jessica's purple belt. Again on the face you can see her eye is separated by a metal line on the fake, instead of being printed on. 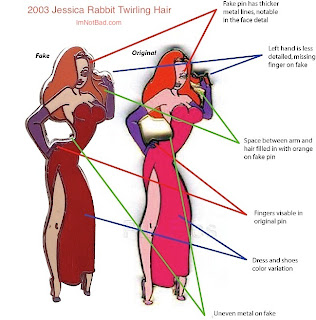 The Twirling Hair pin is a lot more obvious as a fake, but it still might not be to someone new to pin collecting. This is still a pin that can slip under the radar and be traded because while we can tell the differences side-by-side, it is still good enough to pass off as an authentic Disney pin. This one in particular does not sell for a lot of money, but many Jessica pins do, and even ones as highly rare as the Jessica Rabbit Movie Star Jumbo have been faked, some are terrible but others are not as easy to spot. The Jessica Rabbit Decades Series, Roger and Jessica Space Age, Sorcerer's Apprentice Jessica & Roger, Jessica Hot Rods Series, The Christmas Advent Series and the WDI Jessica in castmember uniform pins are all showing signs of fakes and are being sold online in droves. 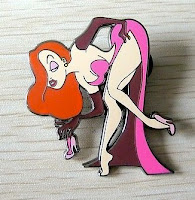 These pins are all different from bootleg pins, which are also easily found online. The pin on the right is one such example. Some pins might actually seem like legit Disney pins, but they are in fact completely fan-made or "fantasy" pins. These are designs not at all crated by Disney. While you can be vigilant when buying pins online, the fake pins have spread do far and wide that even the most honest sellers might not realize they have a fake pin. The best thing to do is buy your pins directly from Disney. This has been a huge challenge as of late since the majority of pins are being released at the Disney Soda Fountain Store in California and each of the parks, but not through their website. So unless you live around any of them it completely cuts down your chances of getting pins. Perhaps this was also a move by Disney to combat the fake pin issues. Remember to carefully view a pin when trading, and when buying online, unless you really know the sell well enough, it might be safer to avoid it altogether.