In January of 2013, it was announced that neo-pop artist Romero Britto would be adding Jessica Rabbit to his catalog of Disney characters recreated in his bright, energetic style. Known for his use of bold colors, graffiti patterns and elements of cubism, Jessica joins the growing list of Disney characters recreated by Britto, such as the Little Mermaid, Tinker Bell and Mickey Mouse. How does this statue look in person? Read on to find out!

The last few Jessica Rabbit pieces released (the Premium Format Figure, Animation Cel) were amazing collectibles, but their high prices surely burned a hole in a few wallets. The Jim Shore statue was definitely a welcomed surprise, with a much more affordable price, and still having the look and quality of a high-end collectible. The newest Jessica Rabbit statue is another such piece. Neo-pop artist Romero Britto is known for his style of colors and patterns, much like Jim Shore's work is recognizable, though their work is very different. Britto uses bold colors and cubist patterns for his designs and isn't afraid to tackle any Disney character - even Jessica Rabbit. The promotional photos were revealed in January of 2013, and the statue is just now making the rounds and being released to retailers - though this statue is actually a "bust" with all the correct puns imaginable. The bust comes in a colorful Britto box with a stylized Mickey Mouse on the front. It's packed very well in styrofoam and comes with a small tag about the artist. The piece is very simply titled Jessica. 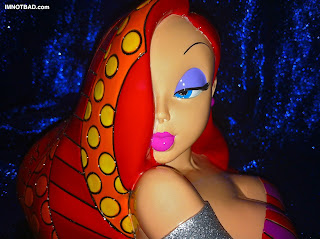 The pose is one everyone is familiar with - it's her sultry, over-the-shoulder glance. The face is extremely beautiful and highly detailed. All the elements that make Jessica Rabbit who she is are all here. She has the heavy purple eyelid, the full pouty lips, the arched eyebrow and the small nose. I do notice that Britto has made her eye blue rather than green. This has been a mistake I've seen before, but since Britto uses such different colors for the characters, it's hard to know if her eye is blue on purpose or not. Still, it doesn't take away from the piece. This type of "on-character" likeness for a Jessica statue does not happen too often, so it's wonderful to see something so well done and visually appealing. The eyelid is the usual purple color, but the lips are more of a hot pink - as well as her earring.

Jessica's hair is more of the main attraction for a change, with Britto using that as his pop-art canvas and making it more of a focal point. The base color of Jessica's hair is orange but it is filled with colors and patterns. Closest to Jessica's face is a brighter orange strip with yellow polka dots. Something tells me Roger would already approve. Then there is another strip of orange and dark orange stripes. Then a small strip of orange polka dots. The further strip, which wraps around to the back, has a pattern I was not understanding at first, until it hit me that it was Britto's signature going in all different directions. The back of Jessica has more dark orange stripes and dots, but there is also a bright yellow stripe with orange dots, which spits off in two toward the bottom. Even with all these patterns and dots, there is a flow to the black lines which works with the flow of her hair. All of the inner dots and lines are outlined in black as well.

Jessica is wearing her usual glove and dress, though they are colored differently. Her dress is a mix of red and hot pink diagonal stripes. The glove has a touch of something extra which was not seen in the promotional photos. Jessica's glove is covered in silver glitter, or as it's stated by Britto, "diamond dust." It gives the piece a little something extra, as well as a different part of her outfit being glittered than her dress. Some of the paint lines around the hair and certain other areas is a little sloppy but overall it's pretty well done. The application of the glitter seems secure as I didn't notice any stray pieces around. 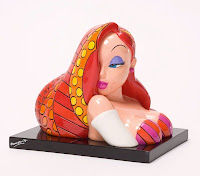 The bust is made of stone resin and is fairly sturdy but not very heavy. The paint is all shiny and catches the light nicely. The whole thing stands and 5½ inches tall, which did not sound like much to me, but in person the bold colors and face of the statue instantly draw you in. The bust sits atop a shiny black display which also has Romero Britto's signature printed in white on the left side. The bottom has four padded corners and the Disney and Britto logos in the center printed in gray.

This is an open edition piece selling for around $50. These are the kinds of pieces I'd like to see more of. Smaller, not too expensive and fun. It's nice to see an artist do something different with your favorite character; using different styles and colors. The shape and look of her face is very character accurate. The piece also looks great from various different angles. Though you would normally have it facing forward, the patterns on the back of the hair make it visually appealing if you displayed it out on a table or in a mirrored cabinet. Britto has often used a character likeness again for key chains, mugs and such - but there is no word if Jessica will be used again. Unfortunately, this bust may become a hard-to-find item. While Amazon.com had many of these listed for sale initially from different vendors, it's now only down to a few. I have not seen her in stores yet, and I'm not sure how easily available she will be. Don't pass it up! 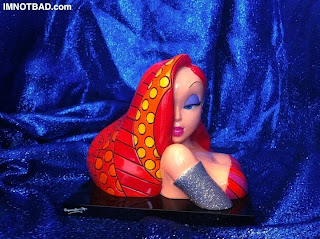 The Jessica Rabbit Britto Bust gets 4½. It's bright, colorful, fun, and it's a great likeness of Jessica! The price point is great and it's worth it for a nice, and very different, collectible of her. The paint lines are a little uneven or sloppy in areas.