I finally started to try my hand at doll customizing. It's something I've never ever tried before, so I didn't quite know what to expect. It's certainly not easy, but it's a lot of fun. Which two dolls did I use to make these customs, read on to find out! 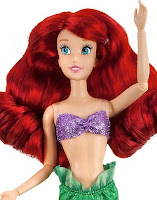 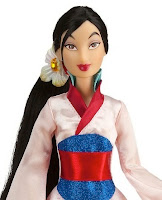 Ariel was an obvious choice - Mulan was chosen because I thought her lip and nose shape matched Jessica's a lot more. It posed a challenge with her hair, and I had no idea how I'd make it work. I also had no idea they made doll wigs. I ordered the dolls and the work began. Removing the paint with acetone nail polish remover and Q-tips was easy. I washed the faces thoroughly after. I removed Mulan's head, which was fairly difficult, and cut her hair off. I used tweezers inside the head to remove most of the hair from around her ears. I found that leaving some short hair gave something for the doll wig to grab on to, so I left it like that.

Painting was not so easy. I bought very small brushes and didn't even test them out by painting something else before the project. I started on the Mulan doll. I left some of the doll's original painted eyes and lips to give me a guide. With Ariel, I striped the paint completely and lightly drew on eyes and lips with a pencil first. Ariel had a smile so it was a challenge to get the mouth to have the illusion of Jessica's open mouth, but I tried anyway, using photos from the scene where Jessica is leaving Eddie's office for inspiration. I made some mistakes here and there, my hand was not very steady. I got better when getting to Ariel and found that natural light was better to paint in. I used Americana acrylic paints. I sealed the eyes and lips in glossy and the brows and eyelids in matte finish (though I think I accidentally added glossy to the Ariel doll's eyelids.)

I bought dresses and gloves on eBay. The gloves were fairly easy to find, and are hand made - as are the dresses. I'm having a custom dress made but for now these worked. I bought a red velvet and a silky pink dress along with dark purple and lavender colored gloves. I liked the color combination of the red and lavender gloves more and can see why red is often chosen as Jessica's dress color in merchandise. However, the pink and dark purple is a nice combination too. The wig on the Mulan doll is also from eBay and fit perfectly. Though the hair is quite curly, it added a nice volume to the hair. I even bought sparkle blue curtains from eBay as well, which went nice for photos. One nice thing about using wigs is that it can allow for your doll to have several different looks. I also bought a very short 60's style wig which looked fairly nice.

It was a big enough project for a first timer like myself, but I am happy with how they turned out for my first attempt at custom dolls ever. To date, there are no Jessica Rabbit 12" dolls made, so these certainly fill the void. I plan on making a better display and waiting on a custom dress (and possibly a better wig for the Mulan doll) so hopefully there will be more photos soon. Obviously, the doll's proportions don't match the ample frame of Jessica Rabbit, but I imagined this as a doll that would have been released in 1988 when the film debuted. A standard doll body would have probably been used back then, but I will still search for something more fitting. Once I'm a bit more comfortable doing this I plan to record the process and will put it on the ImNotBadTV YouTube Channel.