The Roger and Jessica Rabbit Sketchbook Ornament was released in August of 2013. Part of a new series featuring several beloved Disney characters, this ornament is the very first ever of Roger and Jessica together. It is also the first Jessica Rabbit ornament in ten years. From the preview photos, all the glitz and glitter of Jessica's dress while she's holding an enamored Roger, made this seem like a must-have. However, this ornament isn't without its flaws. Read on to find out all the issues. 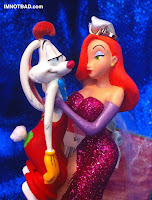 It's been ten years since the last group of Jessica Rabbit Christmas Ornaments were released in 2003. I don't know if they were a big hit or not back then, but I definitely bought my own and reviewed them a long time ago here. Jessica seems like one of the characters who would be perfect for Christmas ornaments. Sadly, the list had remained short, and it wasn't really until her pins became big that Jessica was used to represent holidays like Valentine's, Easter, Halloween and Christmas. The first ever Jessica ornament was by Grolier and released some time around the mid 90s. The second was a set of Roger and Jessica glass ornaments from the Disney Store by Radko in 1999. The next to come out was in 2000 called Jinglin' Jessica, sold only in the Disney's Days of Christmas store. That has become one of the more rare ornaments of Jessica to find now. So ever since the last three ornaments of Jessica in 2003, there were no signs of any Jessica Christmas ornaments in the future. All these years later we have something to look forward to. Hallmark, known for their yearly Christmas ornament collections, will be debuting a Jessica Rabbit ornament in 2014. This year, the Disney Store started a new Sketchbook Ornament Collection by artist Steven Thompson with characters like Alice, Dumbo, The Rescuers, Tinker Bell, and Roger and Jessica.

I first have to let you know when I received my ornament, it was a mess. Very uneven paint lines, paint drops, sloppy work, uneven glitter application, bubbles in the resin and Jessica's left arm glued out of place. I was extremely disappointed in how this ornament looked. I called Disney and they did offer to send me a replacement right away - which they did. 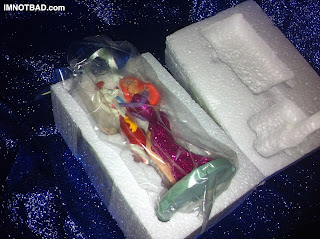 I was grateful they sent the replacement as I don't feel I was being picky about how the ornament looked. You can compare the pictures above to the ones below, but I was fairly surprised at how bad the quality was on that ornament, especially since it seemed Disney was really pushing this series. I wasn't the only one who got ornaments in bad condition. I spoke to other people who bought this and they also were not thrilled about the quality of the ornament. The replacement I received was far better. It arrived in a large Disney box but the ornament was in a plain brown box with styrofoam and wrapped in plastic.

I guess I was a bit more passionate about this ornament looking so good because it really is one of the neatest Jessica Rabbit Ornaments so far. It's wonderful to have an ornament with both Roger and Jessica together. You can see from the original sketch by artist Steve Thompson here he may have dawn inspiration from the very end of Who Framed Roger Rabbit, when Roger and Jessica get to embrace after the climactic battle. I'm surprised an ornament of the two toons tied together hasn't been made, as it's about the only time we get to see them on screen together. This design though is a bit more cheerful than having them tied together, and the concept is pulled off very well.

Jessica looks great, all the right curves and all the right colors. Her dress is fully glittered in dark pink and the look is really fantastic in person. She does have one leg peeking out from the correct side. Since she is bent down a bit, her dress flares out at the bottom to create a much more solid base for her. This is a perfect alteration to make her stand easier and something they could use again for any Jessica statue. The face is very pleasant and reminds me of the Hop In, Jessica! Animation Cell that was released in 2012. The ornament hook is attached to her head and the hanger is a white satin ribbon. Also attached to the hook is a charm which is embossed on both sides, reading Disney on one side and 2013 on the other.

Of course, Roger's here too! He's got his eyes half closed and gazing at his cartoon bride. The colors are all very vibrant, and (at least on the replacement ornament I received) the paint is clean and applied well. Roger even has the correct green patch on his backside. There is also some plussing to Roger as well. He has flocked orange hair and a flocked white tail. This is a nice little touch and makes him stand out more. Since Jessica is in her glittering glory, you would think Roger might be overlooked, but seeing as this is one of the few pieces of them actually together, you cannot help but look at both of them. Roger's comedic glance and mannerism as opposed to Jessica's sultry look make this a very cute ornament. It's a shame we do not see pieces of them together more often.

The couple is standing on top of a Toontown manhole cover which is a light and dark gray. The bottom is stamped with the Disney/Amblin mark. They are in Disney Stores and online for $12.95 each (or $10 if you buy two or more ornaments). The whole thing stands at over 4 inches tall - and stand it does! This is not only a good ornament for your tree, but it can also stand it up at your desk or on a shelf for display. This is an open edition piece around while supplies last. 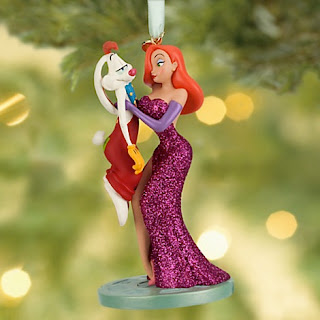 This Roger and Jessica Rabbit Sketchbook Ornament is definitely worth getting. However, this is a first time I'm not able to accurately rate it just yet. While all reviews from the Disney Store website are positive at the moment, I know for a fact not everyone was happy with the quality of this ornament. I also had issues with the first one I ordered, from very sloppy paint work to Jessica's arm coming out of joint. It might be best to buy these in person where you can see them up close first.