This month on ImNotBad.com we are going to review a memorable Movie Moment each Monday, and take a look back at what made Jessica Rabbit such an iconic character of the 80's. 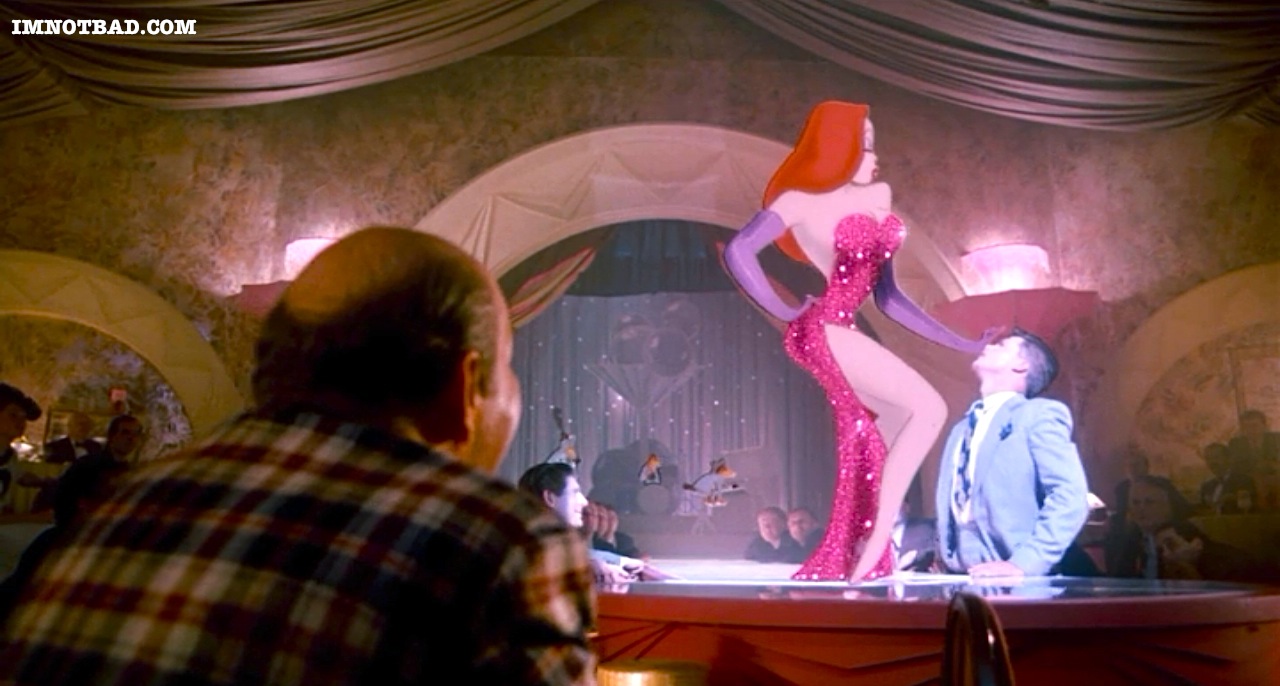 The first photo is from Jessica's on-screen debut, during her show-stopping performance at the Ink and Paint Club. A point that might have gone unnoticed to the audience is that the Ink and Paint Club was based on real clubs of the 1940's. The Cotton Club was one such real establishment, where African Americans were not allowed in as patrons, but could be performers. This was a small undertone in the movie, but we can get the idea that the Toons were not treated equally to humans.

When detective Eddie Valiant opens the door to this speakeasy, cartoon bartenders and waiters are bustling around the place. Donald and Daffy Duck are playing pianos on stage. It was one of the most complex scenes of the movie - but the best was waiting for the eye to see. Jessica parts the curtain with her long leg and ample bosom, something Eddie clearly was not expecting. Jessica Rabbit did not have floppy ears or a cotton tail - like her husband, Roger. She was a beautiful cartoon woman with dangerous curves. Jessica's dress sparkled, which was a special effect all its own. Crew of Who Framed Roger Rabbit had to develop a technique to achieve this look. It wasn't easy to figure out, but the procedure was simple - scratching small holes into plastic bags to let points of light through proved to be what worked to make Jessica dress have a life of its own. Her dress was supposed to sparkle for the entire movie, but this would have taken too long to complete.

A few different women were observed to round out Jessica's look and performance. Rita Hayworth's role in the movie Gilda served as a great inspiration, which was noted by the film crew at Comic Con 2013. Her strapless dress with thigh-high slit and opera gloves are used for Jessica's own costume. Veronica Lake's signature peek-a-book hairstyle, which covered one eye, became Jessica's familiar look. The Tex Avery cartoons of Red Hot Riding Hood were the basis for Jessica's design and performance at the Ink and Paint Club.

While the production photo above shows a woman in the place of Jessica Rabbit on set of the Ink and Paint Club scene, she was only used as a guide for the actors and extras to train where their eyes need to be looking at certain points of actual filming. When the routine was down, the scene was filmed without the woman - and it was up to the actors to remember where during the performance there eyes needed to be. It's a risky way of filming a movie, but no woman's proportions would match that of Jessica's, however, the animators did not want to be accused of simply drawing over a woman to achieve the effect anyway.

(Above photos via Hans Bacher)
Jessica Rabbit was such an important character to the film that she had her own drawing class. In the above photos you can see drawing instructor Walt Stanchfield directing a model to walk and move like Jessica - while the artists do their sketch work. All these pieces came together to get Jessica's on-screen performance looking superb. It's one of the key moments of Who Framed Roger Rabbit and definitely memorable for all of film history. Take a look at the video below for Rita Hayworth's performance in Gilda - the look that inspired Jessica's creation.