For a few years, Disney partnered with eBay and formed their Disney Auctions store. You had the opportunity to auction on things like posters, park props, and high end limited edition merchandise. They also began their own Purchase It Now Store, which would let you buy items instantly. One of the specialized items made especially for the site was the Jessica Rabbit Limited Edition 250 Vase. Take a look... 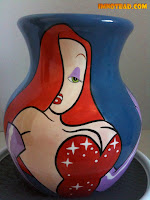 Disney Auctions took off between 2004 and 2006 - mostly selling pins but also offering an array of limited edition merchandise made especially for the site. One such item is this hand painted Jessica Rabbit vase. This was the period when Jessica's pins were overflowing from the parks and internet. To capitalize on her popularity, some more merchandise was released around this time.

There were often Artist Proof pins and merchandise available on Disney Auctions, and this vase was no exception. These three pre-production vase samples are one-of-a-kind and sold at auction on the site. You can see the different looks Jessica's face and dress went through before a final look was chosen. Not much else is known about these, but whoever bought them has quite a rare and special item.

The vase is ceramic, and is actually quite big at 10" high by 9" around, weighing about two and a half pounds. It seems definitely suitable for use with a real plant, but I believe these vases are more decorative. Jessica herself is hand painted in bold colors and lines. The background is a deep blue and when you turn the vase around, you see her shadow in what looks like a spotlight. Because of the shape of the vase, Jessica's face might appear off model in some photos, but the overall appearance is quite nice. However, you might notice that the top part of her arm is rather skinny, and her fingers aren't very well done.

The vase is a limited edition of 250 and believe sold for around $100+ at the time it was auctioned. It is stamped with the Disney Auctions logo on the bottom, edition size and the Disney address on a separate label. It is stamped "Disney" but not "Amblin" as Roger and Jessica merchandise usually does. There were also other characters released in the series, such as Tinker Bell, Maleficent and Cheshire Cat.

There aren't many other Jessica Rabbit vases out there, aside from a few other VERY limited edition, high priced ones. It's nice to see some actual Jessica housewares merchandise that you can incorporate into a spot in your home. While you had to be lucky enough to win the auction, it still shows up now and again at fair prices.

The Disney Auctions Jessica Rabbit LE 250 Vase gets a 4. It is a great item for around the home, and something we need to see more of. It did have to be won at auction, and some elements of Jessica's design were a little off.