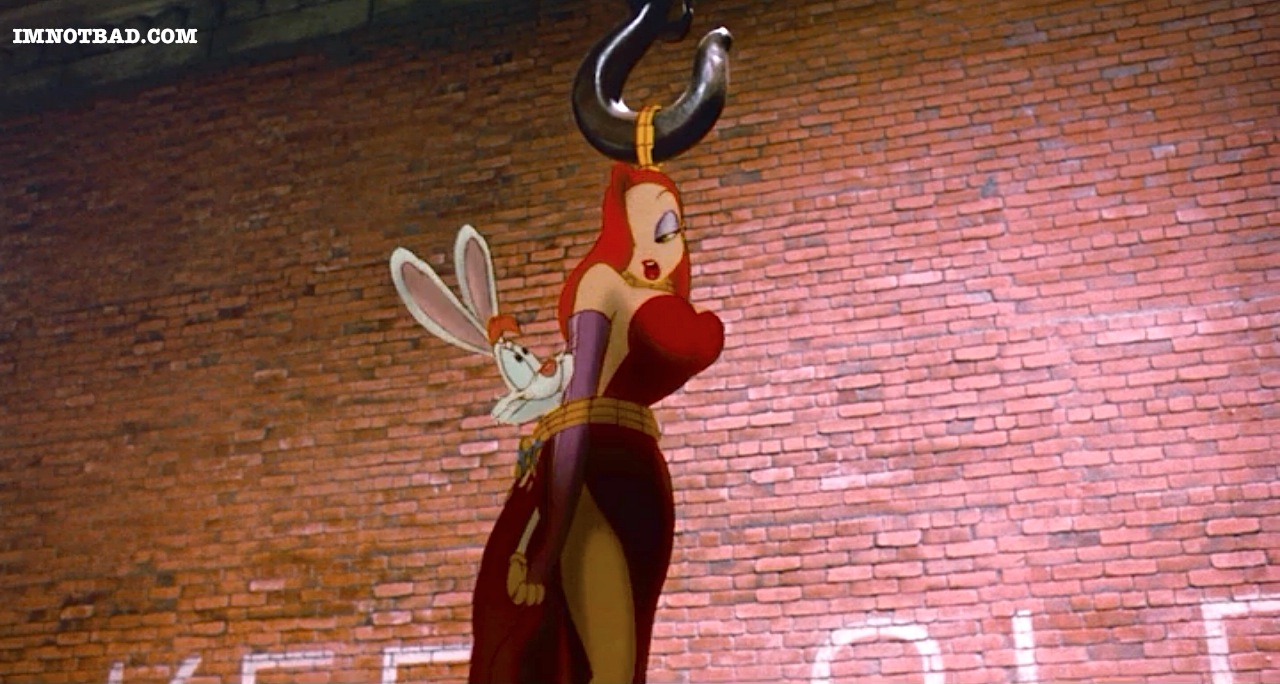 Roger and Jessica Rabbit are one of the most unique cartoon couples in history - with Jessica being a tall, curvaceous bombshell and Roger being a floppy-eared rabbit. Though their time together on-screen was short, the movie was still a hit with its smooth combination of live-action and cartoon characters. This Movie Moment Monday is simply - the end, all of it. Roger and Jessica finally together in one frame! We get the more iconic imagery of the film by the end, with Roger and Jessica tied together in the Acme Factory awaiting their fate. The movie isn't where it all really began. Roger and Jessica had a fairly different relationship prior to Who Framed Roger Rabbit, and their origins go back to the early 80's from the book Who Censored Roger Rabbit? by author Gary K. Wolf. So, in order to have had their small movie moment together, we do have to refer to the book.

A murder mystery, an irascible rabbit and his sultry wife were all part of Gary Wolf's original story - but what didn't make it into the movie is the characters able to duplicate themselves for dangerous stunts (called doppelgängers), the characters able to speak in word bubbles and a genie in a magic lamp. One big difference between the book and movie is Roger and Jessica's relationship. In the movie they have an undying love for each other, in the book their relationship is quite strained. Roger has an obsession with getting Jessica back, but Jessica want's nothing to do with Roger. I won't spoil the ending of the book, but the story plays out very differently and doesn't end nearly the same as the movie. When the book made its way to Disney, changes were made to some of the plot, but development on the Roger and Jessica characters would continue for quite some time.

Roger Rabbit was originally to be voiced by Paul Rubens - better known as Pee Wee Herman. The original look for Roger was also fairly different. He's seen wearing his own hat and trench coat in some artwork, and in early test animation he has no orange tuft of hair on his head, a big round red nose, smaller eyes and cheeks, no gloves, and smaller red overalls. Roger's concept artwork had not been much of a secret, with images popping up on the Special Edition DVD. Jessica Rabbit also underwent many changes, some of the images were seen on the DVD, however these were from just before the film was underway. 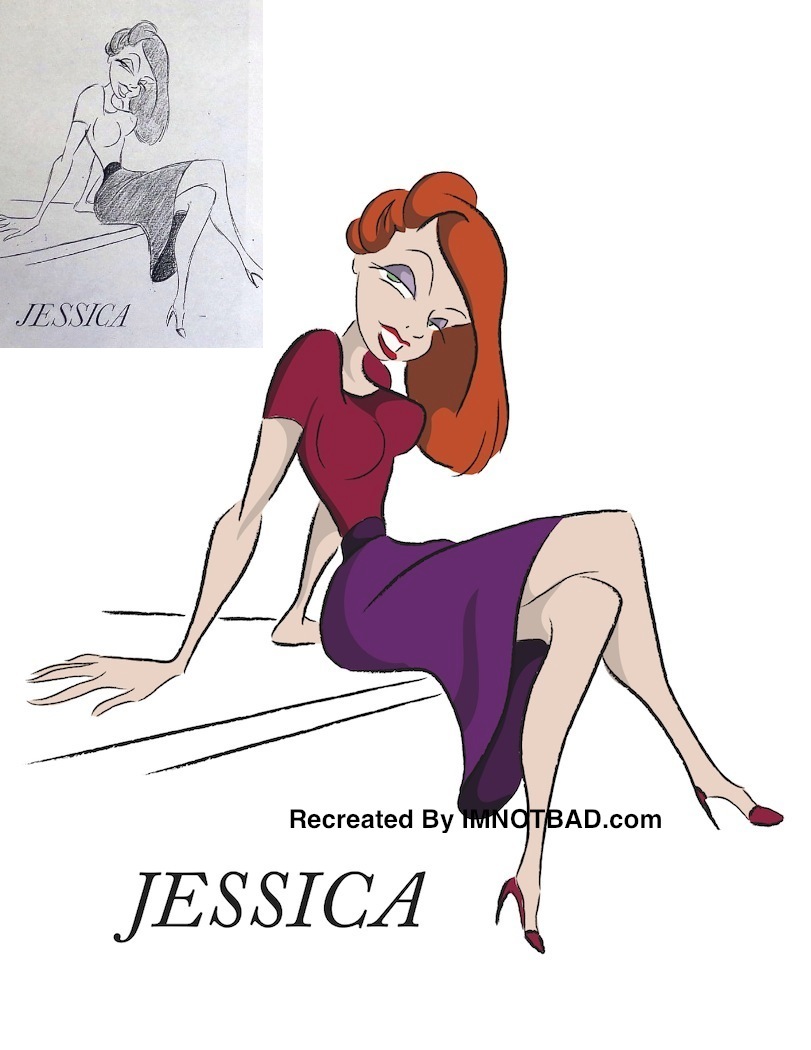 The early 80's concept work for her had not been seen until a clip of pencil-test animation showed up on YouTube, with a small interaction between her and Eddie Valiant using dialog from the book. Another image did surface in a collection of very early concept art with the Roger from above and even Eddie's then cartoon-detective nemesis, Cleaver. The original Jessica had a much more toned-down look and her outfit was very different. She was not as shapely and her hair didn't cover one side of her face. In the pencil test footage, you can see she had a bit of a temper, and is also wearing a different outfit. 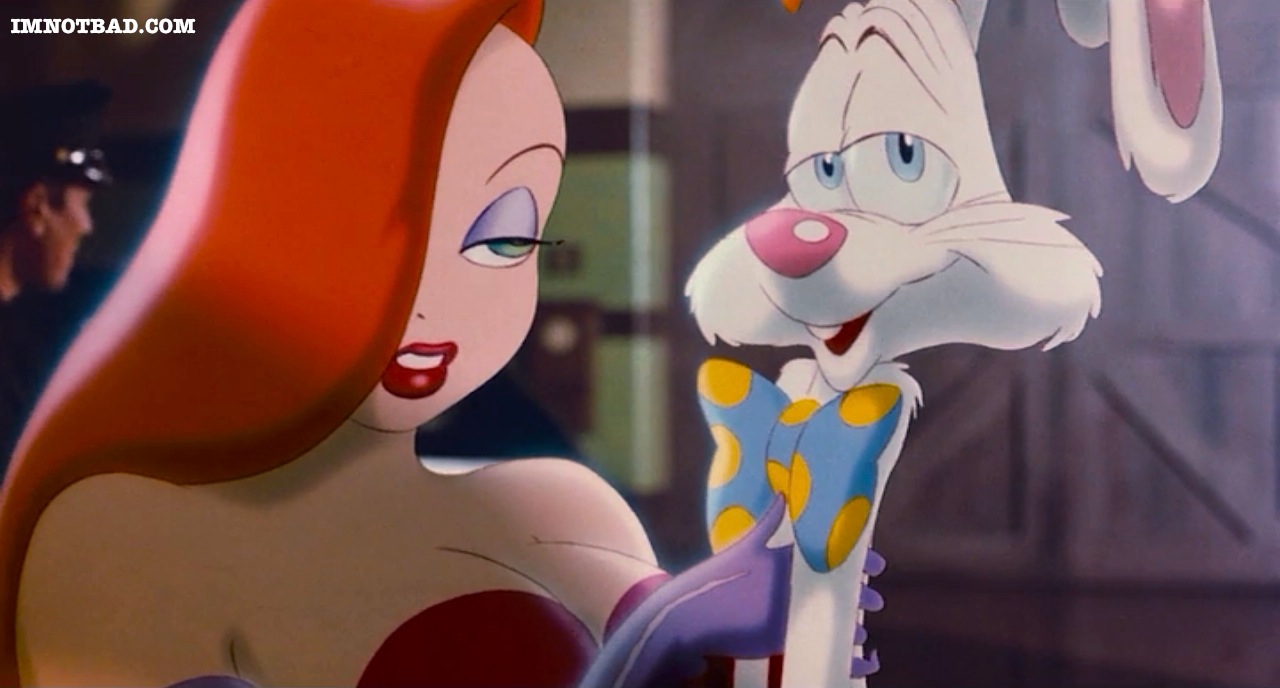 Roger and Jessica still lit up the screen, and the final character versions we got for the film seemed to work very well - making them genuinely appear to have existed in the 1940's. Their relationship was comic-relief simply by looking at them, but it became somewhat of the modern-day fairy tale with laughter being the true virtue and their different appearances not mattering to the other. Both characters took a lot of work to get onto the screen since computer effects were not being used at that time. Roger was voiced by comedian Charles Fleischer, and two women lent their voice to Jessica; Amy Irving singing and Kathleen Turner speaking. She even had her own actress as a stand-in (Betsy Brantley). Roger and Jessica Rabbit were a complex pair to develop but they definitely created a lasting impression in spite of being out of sight for many years. Couples now don costumes of Roger and Jessica, and Jessica herself has become a more popular costume choice for women.