The second Roger Rabbit cartoon short, Roller Coaster Rabbit, was released on June 15, 1990 in front of the movie version of Dick Tracy. Today this short celebrates its 25th Anniversary. The three Roger Rabbit cartoons, which star Roger Rabbit, Baby Herman, Jessica and special guest Droopy Dog, were released on a VHS tape called The Best of Roger Rabbit, and later included on the Special Edition and Blu Ray DVD's. Even if there isn't a Roger Rabbit sequel, there should certainly be more Roger short cartoons. They were very entertaining and in the style of the older Merrie Melodies type of cartoons - full of sight gags, explosions and comedy. Take a look at some concept art and merchandise from this great short...

Like the previous short, Jessica was included, and her screen time increased a little more. In an Exclusive ImNotBad.com interview with artist Tracy M. Lee, he revealed that (much like Jessica's nurse outfit in Tummy Trouble) she was again going to be dressed differently. The outfit that appears to have almost been selected was a fun, and brief, summer shirt and shorts combo. It's all complete with bow in her hair. There are a few examples found in pencil art of Jessica in different poses, and one animation cel which shows her in color. The shirt is pink with white polkadots, with a matching bow. Her shorts are white. Her shoes with straps are blue which matches her belt and collar. These types of art were often found on display at the Disney MGM Studios Animation Tour since this short and Trail Mix-Up were both created right there in the studio. The outfit was never used but years later it was made into a Limited Edition statue. It was available in different colors - pink, green, blue and purple shirts. 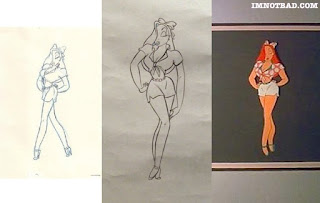 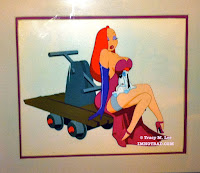 Yet another unused gag for Roller Coaster Rabbit was to be between Droopy Dog and Jessica. While they did share screen time in the film, their interaction was going to be different. Artist Tracy M. Lee was working for Disney at the time and provided this animation drawing of Jessica and Droopy sharing a moment together on a railroad handcar. While it is unknown exactly what the gag was going to be, at least we have official concept art to show us what would have been. This second Roger Rabbit cartoon short was just as manic and entertaining as the first one, and it was followed up by one more a few years later.

The poster again features the three main Maroon Cartoon stars we expect to see. Roger is hanging on to the back of Roller Coaster car for dear life, his expression gives you an idea of what he'll go through in this adventure. Baby Herman has a red balloon in one hand (something that plays a roll in the plot) and popcorn in the other which is flying out of its container. He's carefully cradled in the arms of Jessica Rabbit, who is front and center of this poster. She's barely sitting in the coaster car, with he long legs dangling over the front. While not all posters for these cartoons make mention of the movie they come before, this short very clearly shows the Dick Tracy logo at the top. 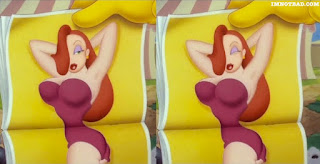 The cartoon opens with Roger Rabbit, Baby Herman and Mrs. Herman at a colorful and chaotic carnival(full of sight gags and easter eggs for the audience to spot). Mrs. Herman decides to leave Roger with Baby Herman, again, and he soon slips off in search of a red balloon. Anxiously searching for Baby Herman in his empty carriage, Roger finds a Playtoon magazine and opens to the centerfold to find Jessica Rabbit in a swimsuit - who gives him a flirtatious wink.

Roger chases after Baby Herman and suffers all kinds of abuse. Once Roger gets to Baby Herman, they happen to be inadvertently stuck on a roller coaster. This cartoon roller coaster reaches impossible proportions, twisting and turning so much that watching it in the movie theater almost made it feel like you were on a motion simulated ride. We see Jessica Rabbit helplessly tied to the coaster tracks - softly saying "Save me." As Roger and his car approach, he yells to her to repeat what she said. Jessica completely changes character and screams angrily, "SAVE ME!" 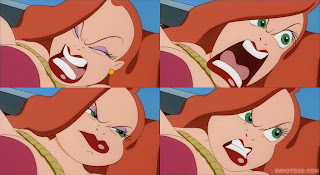 Roger reaches out his arms to scoop her up, but tips over the car. It begins to tumble and happens to bounce right over her. As Jessica watches them continue on, she turns to Droopy Dog who dressed as a villain, exclaiming in his monotone voice, "Curses! Foiled again."

Roger and Baby Herman coast right off the track and right into the real world for the live action segment. Roger causes the film in the camera to come out and be destroyed. The director demands Roger film the scene again, to which he states to the bald director, "Not this hare,Q-ball." Roger runs off and we see a woman give Baby Herman his red balloon. Now out of his "baby" character and smoking a cigar - which he uses to pop the balloon and says, "Afraid of a little bang?" This no doubt earned the cartoon it's PG rating, unlike the other two which were rated G.

According to IMDB.com, there was a cut scene with all of the classic Disney characters appearing in this film, but there is no other information to know if this is true. All the voice actors returned for this short, including Kathleen Turner performing as Jessica.

Aside from the Jessica concept art statue, Disneyland Paris released a Roller Coaster Rabbit themed pin at their Big Thunder Mountain Event. The pin is a Limited Edition of 400 and shows Roger and Baby Herman in a wood cart on the Big Thunder Mountain ride (the cart still being appropriately numbered 13) and Roger has his arms stretched out to rescue Jessica. Jessica is tied to the tracks, taken straight out of the cartoon short. This is quite a pin. There is a lot of print work on it such as the ride logo at the bottom in yellow and red, as well as Jessica's eye, lips and glove. Roger and Baby Herman also have printed elements on them such as their eyes and they are a second pin-on-pin layer. One pice of merchandise that was never created was by Len Smith in 1996. At the bottom it reads that this was to be a puzzle of Jessica Rabbit tied to the tracks with Droopy Dog nearby. 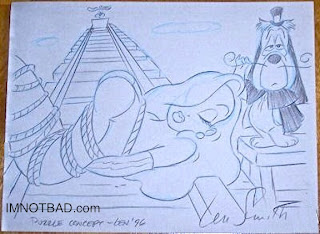