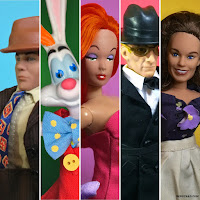 Several years back I decided to make a Mego-style set of Who Framed Roger Rabbit figures. Luckily there was a great website that provided a lot of pieces and accessories needed. It sat as an unfinished project for some time until earlier in the year when I decided to get it completed. It was a big learning lesson in garment making, research and patience...


It was a long journey in making this figure set happen. I started on the project some time ago. Through the Figures Toy Company website ClassicTVToys I was able to find the majority of the parts I needed. Eddie Valiant and Judge Doom came almost completely from various parts already offered. I painted Eddie's tie easily enough. I attached a cape to Dooms jacket and painted the glasses. While those two were easier, needing not much work, the rest of the project was a lot bigger.

Jessica needed a full face repaint - and she, Dolores and Roger needed outfits. As I've never even attempted to sew an outfit, much less ones so small, I decided to try and use fabric glue. I also was not going to be satisfied with fraying fabric and decided to hem everything (if that would even work with glue). I started with Dolores and did a test run. I had to be carful when attaching the sleeves and placements of pieces. I had to do a lot of waiting and holding, but the glue worked. Dritz Liquid Stitch 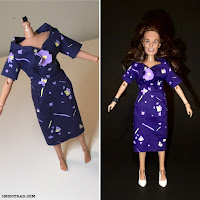 I bought fabric squares from JoAnne's in various colors and also paint for plastic and fabric. I needed to create Dolores' fabric pattern myself, which was quite tedious. After my test run on black fabric I made the real attempt at her dress with the patterned fabric. That was not quite working and I realized the areas I was gluing incorrectly. I made another attempt and this was the final dress I used. With Jessica I ended up making four dresses, each with a little different technique and pattern. I wasn't too happy with the first dress. The second dress was better, but ill fitting. The third was perfect, but somehow I made it too short. After remaking it I finally got her dress! I also had to make her gloves and purse. Repainting was a real challenge as the doll is very small but I managed to get something I was happy with. The only Roger figure that seemed to be a fit for a Mego scale were the Flexies figures released in 1988. It took some time but I found a brand new one at a very good price, then I got the bright idea to add the weasel and Baby Herman. I was reaching a bit too far but I bought them all and went ahead. 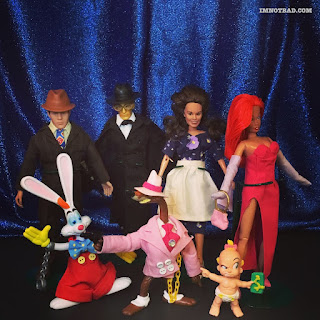 Roger and the weasel posed a difficult problem as I could no move their limbs enough to put on clothing. They were bendy figures but I didn't want to risk being to rough and have this vintage figure break, and it was obvious that clothing was simply not going to get on them in a normal way regardless. I had to work around this and made the weasel's jacket in two parts so it connect in the back and front and slide over each arm. I also made him a shirt with collar and a tie complete with gem. Roger was much the same way but I was able to slide one of his feet in the overalls and had it close around the other leg. In the back it looked a bit of a mess but the front turned out nicely. Baby Herman turned out to be too small for me to make something accurately, I might go back and try again at some point. I also got plastic clamshell packaging for each figure and had cards printed up by Mike Rogers.

I'm glad that I finally finished this project, even adding in the extra, unexpected figure of The Weasel. I hope some day figures like this actually are made. They make such a cool set! I did want to add more characters such as Baby Herman's Girlfriend and Marvin Acme, but I think I'm happy with what I've got for the time being.