Before people were crazy about pins, they were crazy over little stuffed bears called Beanie Babies by the Ty Company. Eventually, Disney got into the act with its own line of beanies based on its characters. For a very long time the characters of Who Framed Roger Rabbit remained missing from the line, but soon after the films 10th Anniversary, Roger and Benny the Cab were released in stores. 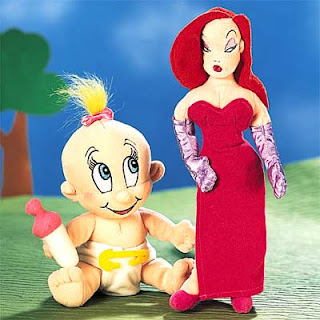 With a small surge of merchandise released, the possibility for a Jessica beanie seemed hopeful, but still uncertain. Yet, 1999 finally brought us a plush version of our curvaceous cartoon. Jessica was sold only as a set with Baby Herman through the Disney catalog and website. For a plush doll, it's perfect and an exact representation of her film counterpart. 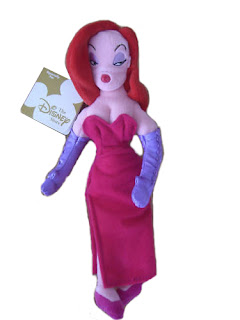 Her face is embroidered and earns the best points for the doll as it is a very accurate representation. Her hair is three pieces. The main part is the back. The other is the part which covers her right eye. It has a little less stuffing in it so it's more movable. The third part is longer and attached to her left side, cascading over her shoulder. Her gloves are a satin-like material (although not as shiny as in the promotional photo and perhaps a different shade) with a wavy ric-rac border down the side which mimics the light colored reflection often seen drawn on her gloves. The dress is the usual color with the slit on the correct side. 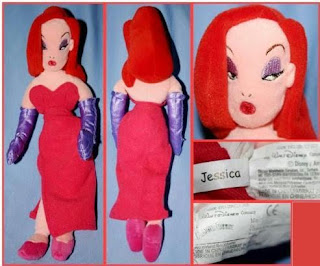 For a beanie, I suppose they did the best they could with her chest adding a strategically placed seam right in the middle. 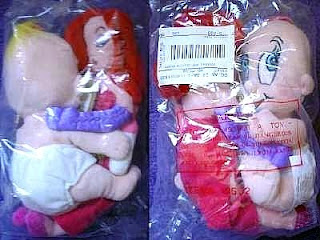 On a humorous note, she is wearing small white panties. There are really the bean-beads in this doll located in her lower torso, backside and legs. The colors are all correct and although it's a mini bean bag, at 10 inches, it's a big enough plush to enjoy. This beanie is easily found on eBay and is worth picking up. 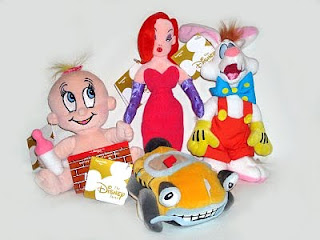 A solid 4½ for accurate face and details, being part of a set, and rounds out a nice collection of four characters from the film.