As I originally intended, I'm going to star putting up reviews of various Jessica Rabbit merchandise. 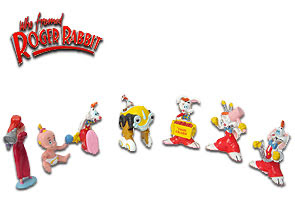 This review is for the first Jessica Rabbit figure made, a PVC by Applause released in 1988. You could find this figure almost anywhere from toy stores to greeting card shops, usually found in a Toon Town display with other characters like Benny, Roger and Baby Herman. 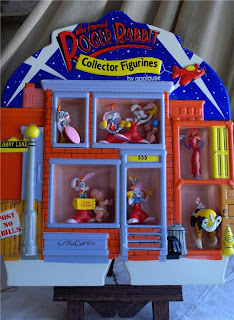 While you cannot expect a small toy such as this to be very detailed, this figure was "not bad" but lacked heavily in many areas. The paint was a bit sloppy. She was given a strange eye and unpainted lips. It changed the whole appearance of the figure. Her hands are a big large also and there is something off about the hair. Disney also seemed not to take ANY chances with her bust, which you can see is Fully covered - unlike in the movie. 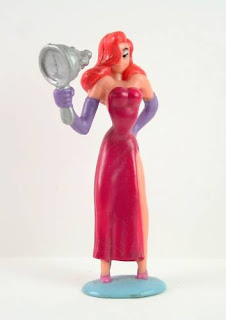 The colors are all correct and the pose is good (in spite of the dress slit on the wrong side). She's holding a frying pan with Roger's face banged into it which is cute. There is a flat base attached for Jessica to better stand with.

I don't remember how much it sold for originally but it was not more than a few dollars, and you can still easily find this figure on line. There are also two other PVC Jessica figures, Nurse Jessica and Jessica with a microphone. I never saw these back in 1988 and from the look of them I assumed they were fan made, but I'm not sure. They may have been available in another country or were of limited availability. 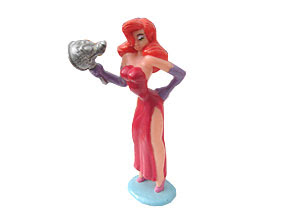 For fun I decided to manipulate the photo and make the Jessica figure as it should have looked - and also with an Ink and Paint Club variant. 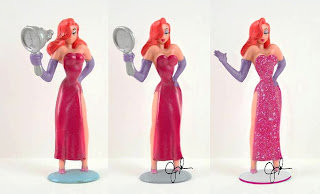 The Jessica Rabbit PVC figurine by Applause gets a 3. The Body was fine, but the face lacked detail, even for a small PVC figure.

Side Note: PVC toys have recently come under fire for not being safe. Polyvinyl chloride products are things like electrical chords, kitchen tiles and even on clothes. The fear is the chemicals may be toxic for both humans and the environment and now many toy manufacturers and hospitals are becoming PVC-Free. 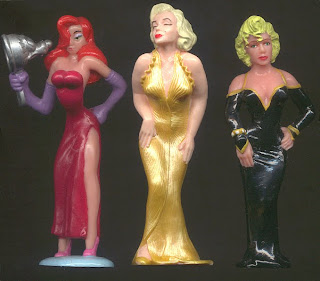