The extremely long awaited reveal of the Disney Designer Fairytale Collection Heroes vs. Villains Set Two happened this week, with four set this year instead of five. Last year we saw Snow White and The Witch, Elsa and Hans, Ariel and Ursula, Rapunzel and Mother Gothel and for the first time ever Peter Pan and Captain Hook. This year, as rumored, we have Belle and Gaston, Cinderella and Lady Tremaine, Aurora and Maleficent, and another first with Alice and The Queen of Hearts. Lets take a close look at the details for this collection... 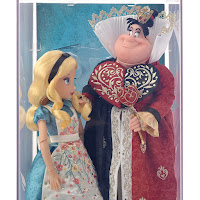 The first set are classic characters making their doll debut much like last year's Peter Pan and Hook. Alice and The Queen of Hearts (or The Red Queen as shown on the name plate) are offered for the first time ever in modern Disney Store doll form. Alice is a shorter doll like Peter Pan was. She has a blue patterned dress with white apron adorned with crystals and embroidered flowers. She's wearing her signature black hair bow over her blond hair and has rooted eyelashes. The Queen of Hearts is in her animated glory, with a new face mold that shows off her plump face, topped with a crown, rooted black hair and eyelashes. Her high, pleated collar is trimmed with gold lace and she wears her iconic red and black gown - featuring gold embroidery and patterned fabric. The Queen is also holding a regal heart-shaped scepter. Disney has made note of the name pate incorrectly naming "The Red Queen" instead of The Queen of Hearts, which is on the sleeve and COA. I have not seen this movie in quite a long time but this is obviously when Alice meets The Queen. The only quote I remember is, "Do you play crrroquet?" 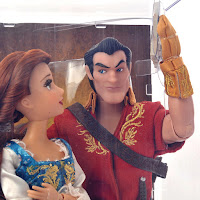 Beauty and The Beast celebrates its 25th Anniversary, and after the dust has settled from the release of the 17 inch dolls, two characters will be released in this second series of Heroes vs. Villains - Belle and Gaston. This is from the scene after the opening musical number where Gaston takes Belle's book, "How can you read this? There's no pictures." Belle is in a new version of her blue dress. The apron is gone and Belle now has an embroidered underskirt with lace trim. The blue portion has light blue and pink flowers printed on it, crystals and gold embroidery. She is also holding a basket, has a large blue bow in her hair and has rooted eyelashes. Gaston holds up her book out of reach and is wearing his more familiar clothes, the red shirt with gloves and pants. He also features embroidery as well as a dagger and archer's bag. It's a little hard to tell but it looks like Gaston may have new arms. 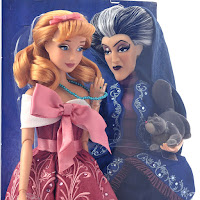 Cinderella and Lady Tremaine seem to be the favorite in many people's opinion. First, Cinderella now has the correct hair color that matches with the movie. Usually her doll is always a very light blonde, but you can see for the set they made her hair a little darker. She's finally wearing something other than her traditional "blue" ball gown and instead has her mothers pink dress that her friends altered for her. The dress is dark pink with light pink embroidery. It's finished at the bottom with pink bows and a white skirt with lace is underneath. She has a pink bow in her hair, rooted eyelashes and blue bead necklace. Upon first looking at the large bow on Cinderella's bodice, I noticed that it was misshapen, as this is the dress that is damaged from being torn by the stepsisters. The pink bows at the bottom are ripped and there is a large tear in the center of the dress. I'm a little surprised that the version of a Designer Doll sold would actually have a torn and damaged look to it, even if that is accurate to the scene. However, Lady Tremaine holing the blue beads and saying, "These beads, they give it just the right touch." happens before the dress is destroyed. While it is an interesting choice, and I applaud Disney for doing something different, I think the dress should have been left intact to be better presented in the set. Cinderella's expression is a little more somber and does match the mood. Lady Tremaine is in a version of her ball gown, offered for the first time by Disney Store and is only the third ever doll of the wicked stepmother. She is wearing an embroidered veil, dark purple jacket with light purple embroidery and crystals and a full layered gown. The best accessory is her cat, Lucifer. He seems slightly smaller than he should be but also appears to have a jointed neck and flocked fur. Lady Tremaine also features new eye makeup, rooted eyelashes and earrings. 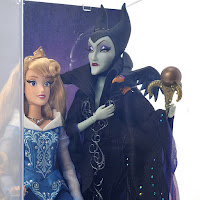 Aurora and Maleficent the pair that hardly have any screen time together. Maleficent hypnotizes Aurora after returning to the castle and creates a spindle to complete her curse, "Touch the spindle. Touch it I say!" Aurora's eyes are quite different in the way they are painted, making her look slightly under a spell like in the movie. I do wish that her smile was not as strong but it's very cool to see these different expressions on the dolls for a change. Aurora is wearing her blue dress, as that's the color it is in the scene. Her bodice features blue embroidery and crystals and that is the extent of the details to her dress, leading many to suspect her sleeves and gown are a light chiffon-type fabric. She is also wearing her gold crown and necklace fitted with crystals and features rooted eyelashes. Maleficent looks wickedly evil in a new version of her black and purple robes. She has a high collar, long black sleeves with crystals, purple fabric under the black robes and a black thorn accessory down the front of her robes. She also has her magic staff, Diablo perched on her shoulder and rooted eyelashes. There is no spindle accessory, which has some people a little disappointed, but there is a chair that Aurora is sitting on that is very detailed but hard to see in the promotional photos.

For more information, and a complete list of Disney Store Locations selling the collection, visit the Disney Store Buzz Blog.