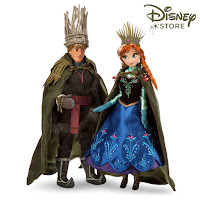 It's dollMAGEDDON season, and this year the schedule is overflowing with new Disney doll releases. Always hoping there will be a new Jessica Rabbit doll on the way, I've been keeping tabs on what's coming out since the first Designer Collection was released in 2011. During all this reporting I've managed to buy a few things over the years myself, but sadly it appears we won't see a Jessica doll in 2015. There is, however, a new collection which could be promising in the future. The new Designer Collection has seen the release of shirts, mugs, bags and journals - with the dolls soon to come. What else can we expect from Disney, read on... 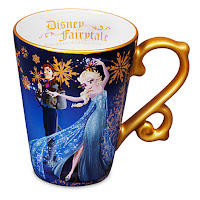 This year, the theme for the Designer Fairytale Collection was heroes and villains. A limited amount of the full set of 5 couples went on sale last week and sold out the same day. This ensures buyers a complete set, however, they usually don't ship out until after the final doll set is released individually. It's also worth mention that this year there is a one-off Designer Collection set featuring Anna and Kristoff which is not included in that collection. Other merchandise based on the artwork has already been released at the Disney Store.

A new collection appeared at the D23 Convention this year, The Signature Collection. It featured only Minnie Mouse and offered a doll as well as other items. This line uses the same concept as the Designer Collection, with the plastic display case and slip cover with artwork. The metal name plate and Certificate of Authenticity are also here in the same places as the other dolls. Minnie has real rooted hair that fully covers her ears and head, which is an interesting way to go about the design. She's wearing a black gown with red bow, necklace and also has rooted eyelashes. She was sold as a D23 exclusive. It is unknown if this is a line that is going to continue, but it will be interesting to see if anything else becomes of this series and if other characters will be added in the future.

There is also a lot of uncertainty regarding the 17 Inch Heirloom Collection. Once Aladdin is released on DVD next month, all classic Disney Animated movies will have received their Diamond Edition DVD. All princesses have been released as a doll with their DVD - except Pocahontas and Mulan. Naturally, this hasn't gone unnoticed but there have not been any clues if Disney intends to make them as 17 inch dolls. Another character who was passed over was The Evil Queen from Snow White, as Snow White was the first ever 17 inch doll to be released. Now that they have added several villains, The Evil Queen would be an unfortunate omission. Jafar joins the series as the first male villain, and Jasmine received two dolls (one being the D23 Exclusive Slave Jasmine). There's also a lot of rumor that there could be more dolls released from Aladdin. The other 17 inch dolls that should be the final ones for the year are Frozen Fever Anna and Elsa. It's a lot of dolls in a short period of time!

The release dates are as follows: