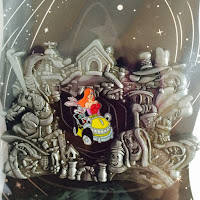 The border of the pin is a silver metal relief sculpted scene with all five weasels, the front of the ride building, and some of the toon props found in the ride. In the middle is a clear filled, multi-colord circle which has a stained glass appearance. Roger, Jessica and Benny the Cab are in the center. Jessica's dress is glitter filled. This was released only at D23 as a cast member only exclusive. It is Limited Edition of 300 and sold for $18.95 each.