It's been many years since the debut of Jessica's in her Hawaiian outfit. In 2003 a pin was released with Jessica in front of a large surf board and clad in a bikini top and grass skirt. This image later made its way to a t-shirt, a hat, a button-down shirt, a framed print and a beach towel. Take a look at the newest beach-going Jessica merchandise - the Surf Shack Mug.

In April of 2014 a new Jessica Rabbit mug was released in Disney parks. The image of Jessica had been used way back in 2003, but it was a popular, newer image of her. This mug also showed up for a brief time on the Disney Store website and eventually sold out. The mug is red and the handle and rim are black. Jessica Rabbit is on one side in her green bikini top and grass skirt. She's also wearing a pink flower lei around her neck and one on her hair. She's standing in front of a large, striped surfboard. There are oversized blue flowers on each side.

The other side reads Jessica's Longboard Surf Shack - Makin' them big since 1950 which is surrounded by bamboo and flowers at the top and bottom. There was rumor Disney was going to pull this (or did pull this) mug from shelves because of the suggestive nature of the slogan. It appeared not to be the case as it later went on for sale on the website.

The mug is a very sturdy ceramic and is a standard size. The image of Jessica is very crisp and bold colored. The slogan on the other side was also used on the original hats and shirts from back in 2003. On the bottom of the mug there is the Authentic - Original Disney Parks logo, along with the Disney/Amblin mark. There is also some kind of code printed on it as well. I'm not sure what this is but it looks similar to codes that have appears printed on pins.

Disney's Official Description:
Why, aloha!
Overcome waves of thirst with this Jessica Rabbit Mug. Wearing her Hawaiian lei, the proprietor of ''Jessica's Long Board Surf Shack'' poses in front of a surf board as she enjoys a Polynesian vacation away from Toon Town.

Magic in the details...
Created especially for Walt Disney World Resort
Hot beverage mug
Jessica Rabbit art on one side and ''Jessica's Long Board Surf Shack - Makin' them big since 1950'' on other side
Contrast handle 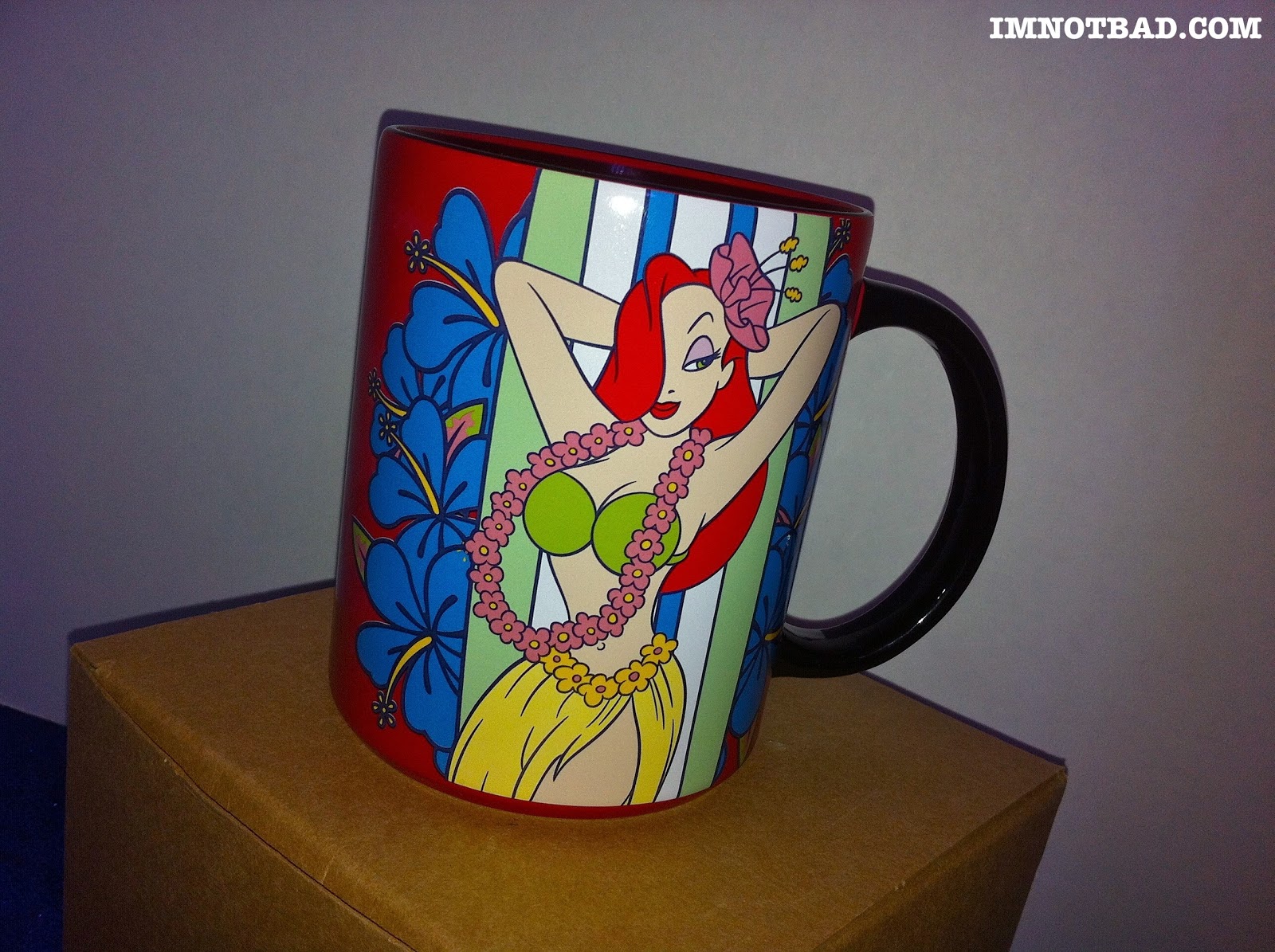 The Jessica's Long Board Surf Shack Mug gets a 4½. The colors are great, the image is bright and well done. The slogan is a little surprising for Disney to use, and might not be family-friendly for certain people.