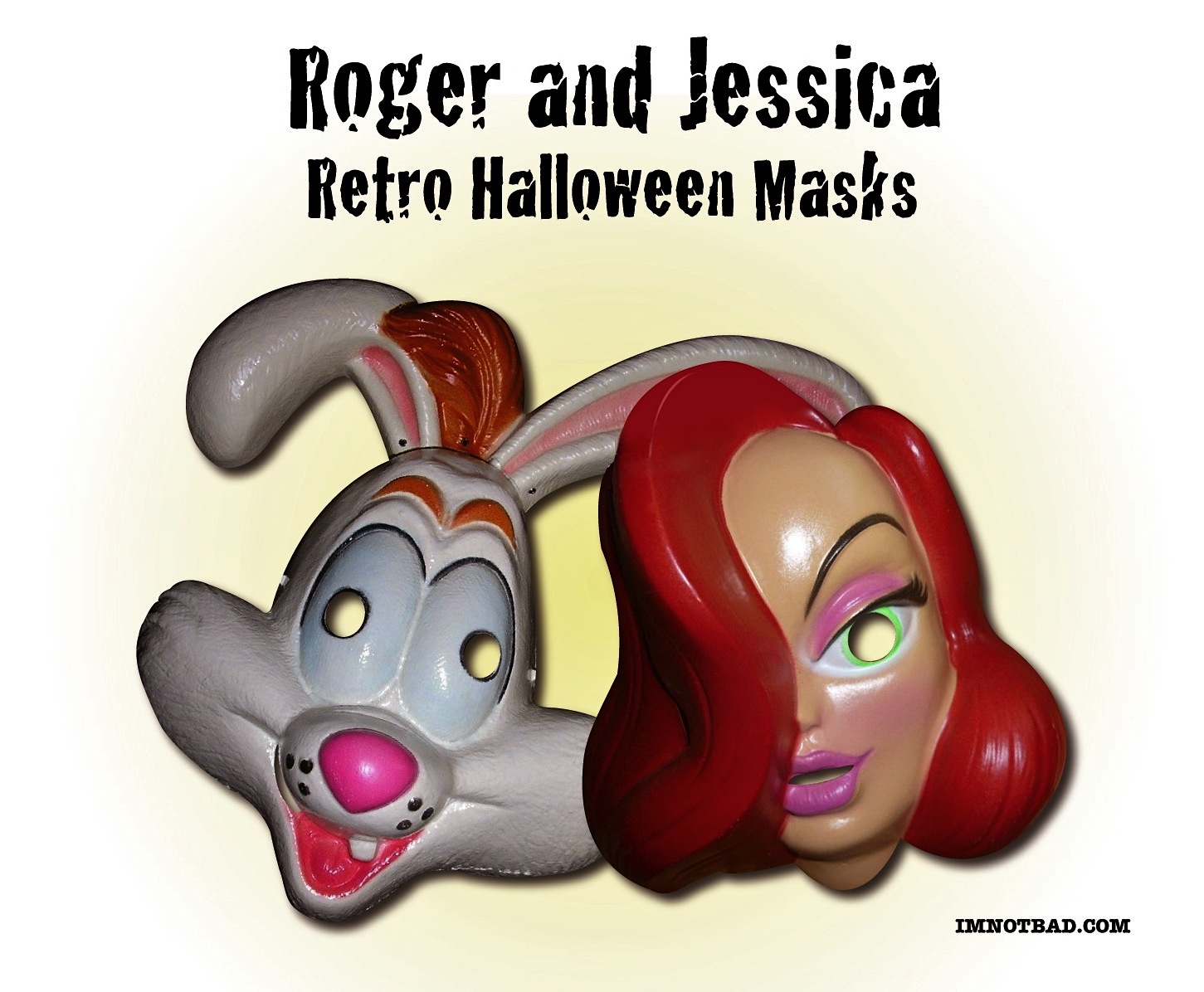 AAAAAAAAAHHHHHHHHHHHHHHH !!!
Don't be alarmed, we're not seeing the new Disney Park Jessica Rabbit mask. As we get closer and closer to Halloween night, this will be the scariest, creepiest, most blood curdling post ever. Long ago, on some dark and rainy night - in a strange old factory filled with blank, expressionless faces, these evil masks were born.

Costumes from the 1980's are easily recognizable and were a huge part of any kid's life growing up in the 70's and 80's. The well known Ben Cooper Inc. company began making Halloween costumes in the late 1930's and within a few years became a prominent manufacturer for Halloween costumes. By the 1950's their catalog included Disney characters, superheroes and even Presidents. By the 1970s, the company was one of three top Halloween costume companies - the others being Collegeville and Halco. 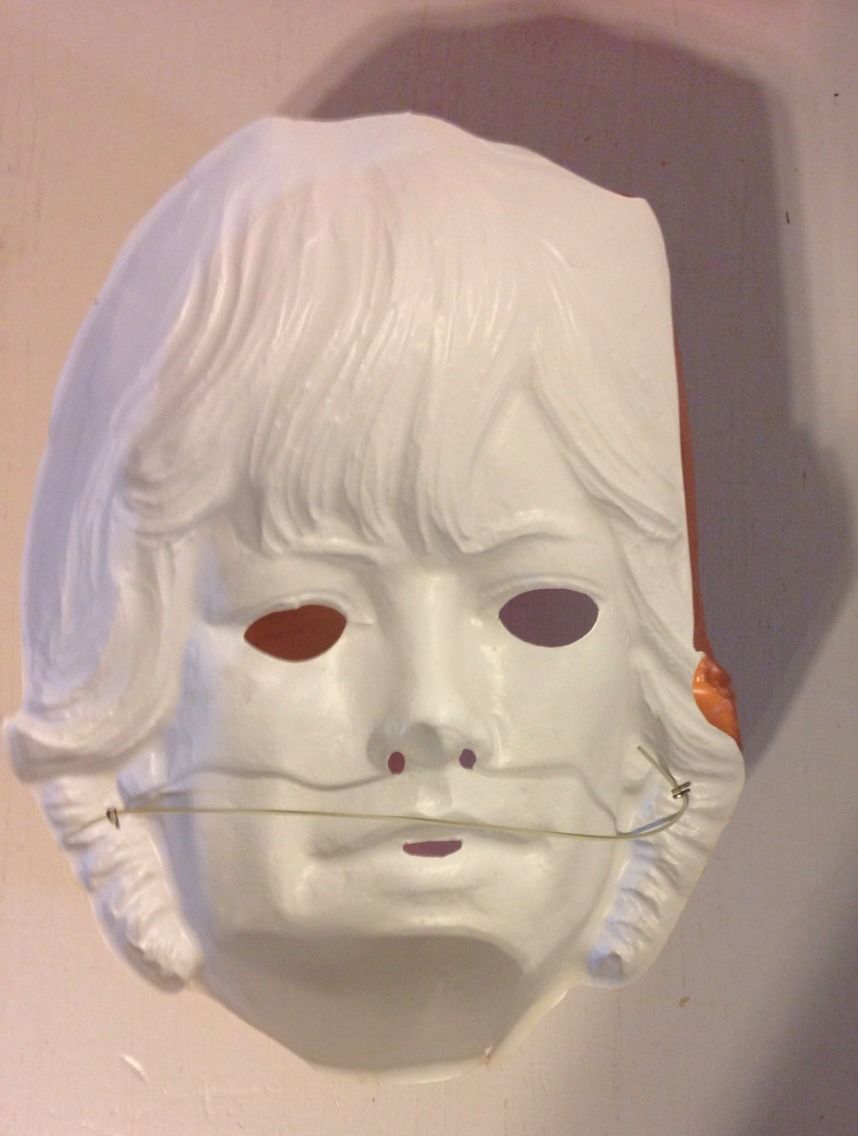 I was very familiar with these costumes. They were THE big thing in the 80's. I vividly recall dressing as Wicket the Ewok from Star Wars for Halloween of 1983. Even though these costumes were all the rage, they look quite comical and archaic by todays standards - but we sure did love them back then. The mask itself was tricky. It was made of a thin, fragile plastic that seemed more like a packaging material. The edges of the mask around the eyes or nose were often rough or had some pointy edge that would scratch into your skin. If the mask happened to crack (which it could easily in certain areas) the annoying feeling of the plastic point cutting into your neck or cheek was unfathomable! The mask was held onto your head by small elastic bands. Naturally, if these broke, you were left with half a costume. It also wasn't uncommon for a gust of wind to send one of these flying off your head.

The rest of the "costume" actually was a plastic-vinyl smock that slipped on over your clothes and tied up in the back at the neck. It often had designs printed on the front, usually with the name or the picture of the character. The smock, as you might imagine, was quite uncomfortably hot and slightly cumbersome to wear. The smell of the vinyl alone was enough to cause hallucinations. However, we kids persevered through the torture and proudly marched on down the streets to trick-or-treat as our favorite character. This is all we had and it was obvious the company went to great lengths to be the top costume retailer. While almost all characters were represented in the familiar Ben Cooper costume line - like He-Man, Freddy Krueger, Superman, The Smurfs, Wonder Woman, Cabbage Patch Kids, Batman, Lone Ranger, Jem, Star Wars and Disney - two characters never did make it to plastic costumes.

In comes The César Group (now joined with the Disguise company) who apparently made their own type of Ben Cooper-style masks in France. They are the only company to create original Roger and Jessica Rabbit masks from when the movie was released. These are extremely rare and it's not known if these were even for sale or samples. I believe I have seen Roger in a package, so he may have been released, but I've never seen the Jessica mask before. As you can see, she is a little more cartoony looking than the movie. It might appear there is only one eye hole, but there is another hole which you can see to the left by the seam of her hair. The costume does not have any nostril holes but does have a mouth opening. 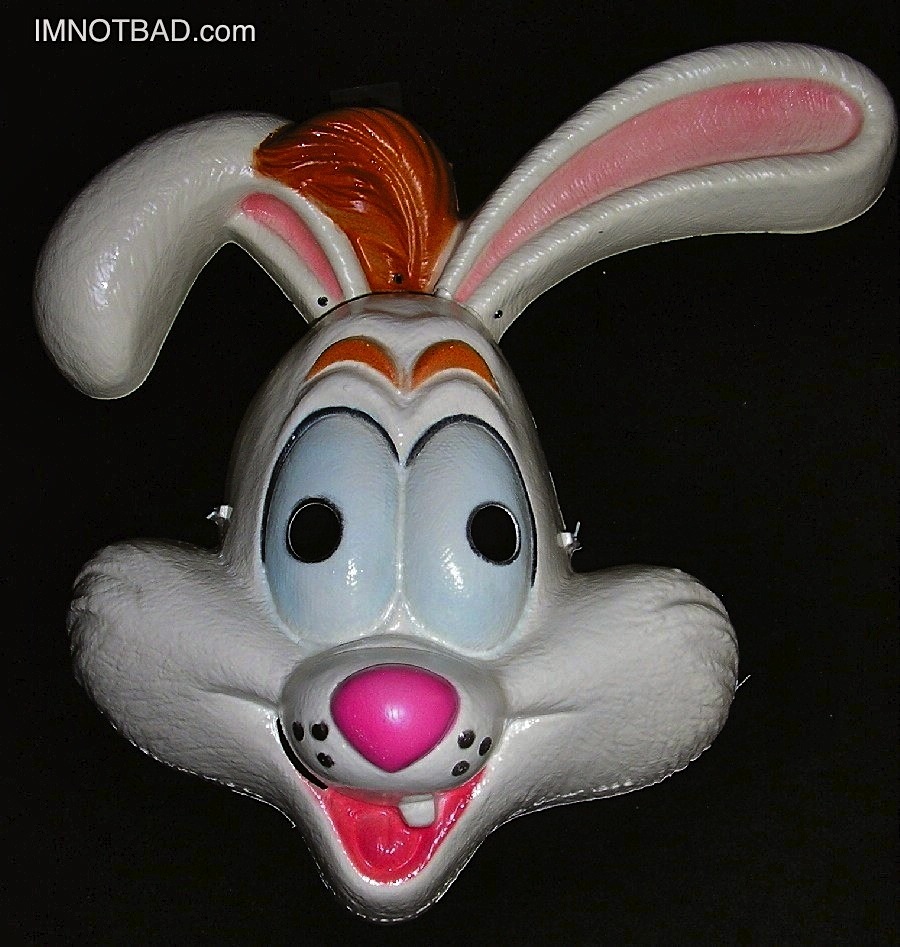 Roger works somewhat better as a face mask. He has two big round eye openings and a very small mouth opening at the corner of the muzzle. The ears and hair are a separate piece which are attached to the head. Both of these were found for sale online many years ago. There was no mention if any plastic smocks were made along with the masks or not. While roger would no doubt have his classic red overalls, I wonder how they would have handled making Jessica's ample form for a child's costume.

While it is unfortunate that Roger and Jessica Rabbit didn't get to officially join the ranks of many characters created into vinyl Ben Cooper 80's costumes, we at least have The César Group's version - which will keep you awake at night or haunt you in your dreams!

UPDATE: It appears there was a Roger Rabbit costume created by Ben Cooper Inc., however they are extremely rare to find now. Here are three photos I saved a long time ago of the costume in and out of the box, in pretty much mint condition. There have been no photos of any Jessica Rabbit costume by this company, but it is more likely she was not made into a costume. 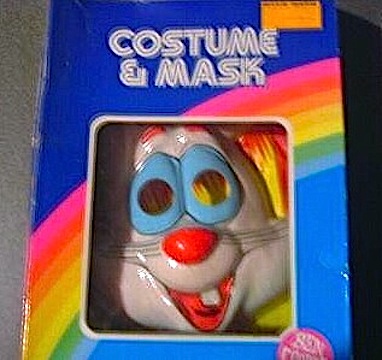 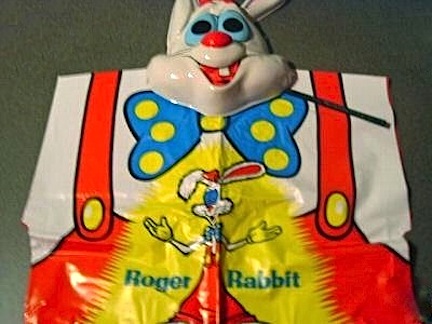