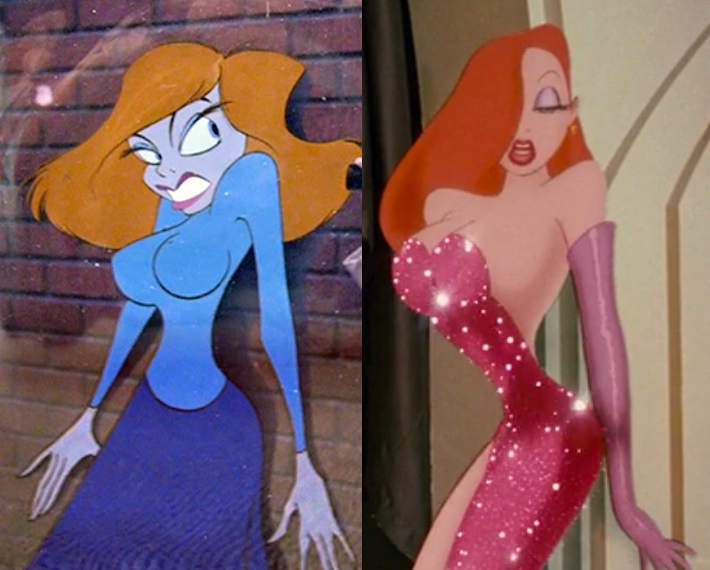 Video has surfaced of a Disney television special from 1983 which features a section on a brand new film in the works at that time, Who Framed Roger Rabbit!. The animators discuss the plot, story and characters for this new film and we are treated to concept art and test animation. This version is a bit different than the one we know, with the character designs for Roger and Jessica Rabbit in their earliest original stages. This version of Jessica is a lot more cartoony, with a distinct early 80's feel. She seems to resemble Lauren Bacall with the attitude of Bette Davis. Her face design is more of a caricature; with harder edges and dramatic lines. Her proportions don't nearly match that which we see in the movie. She is given an ample chest, but isn't as shapely or curvy. She's wearing a dress which does not resemble the one in the movie at all - a tight, long-sleeve, light blue top and full dark blue skirt. In one of her original sketches (below left) she's wearing a turtleneck sweater - a very big difference indeed. We're treated to a more in-depth look at Jessica, and even her first ever test animation. 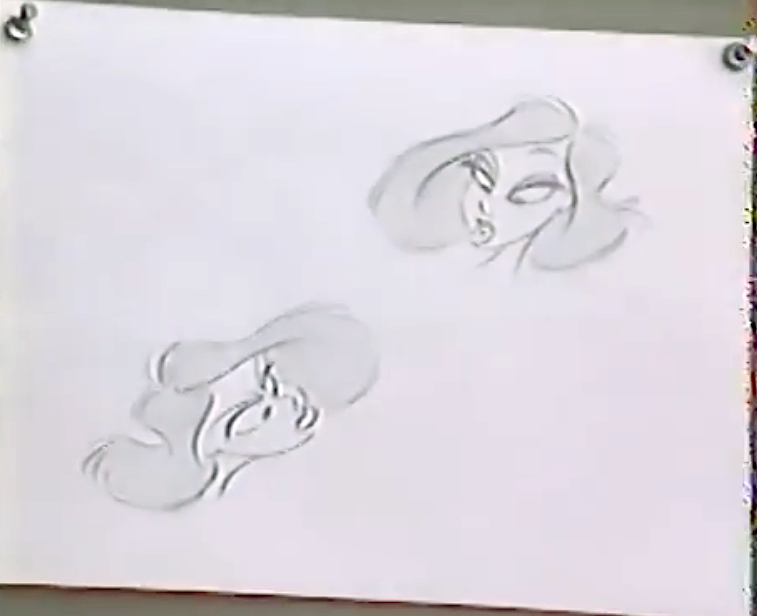 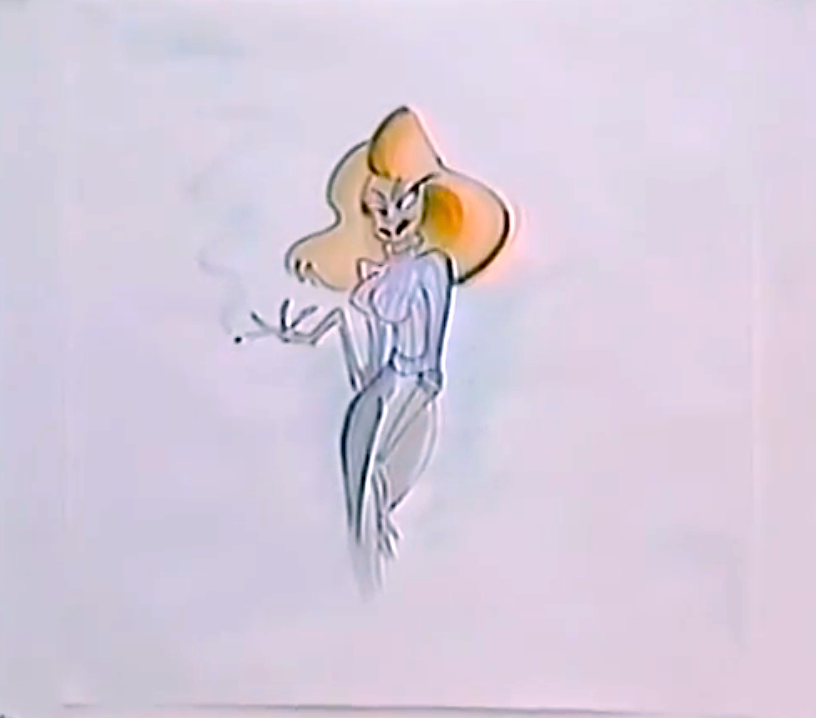 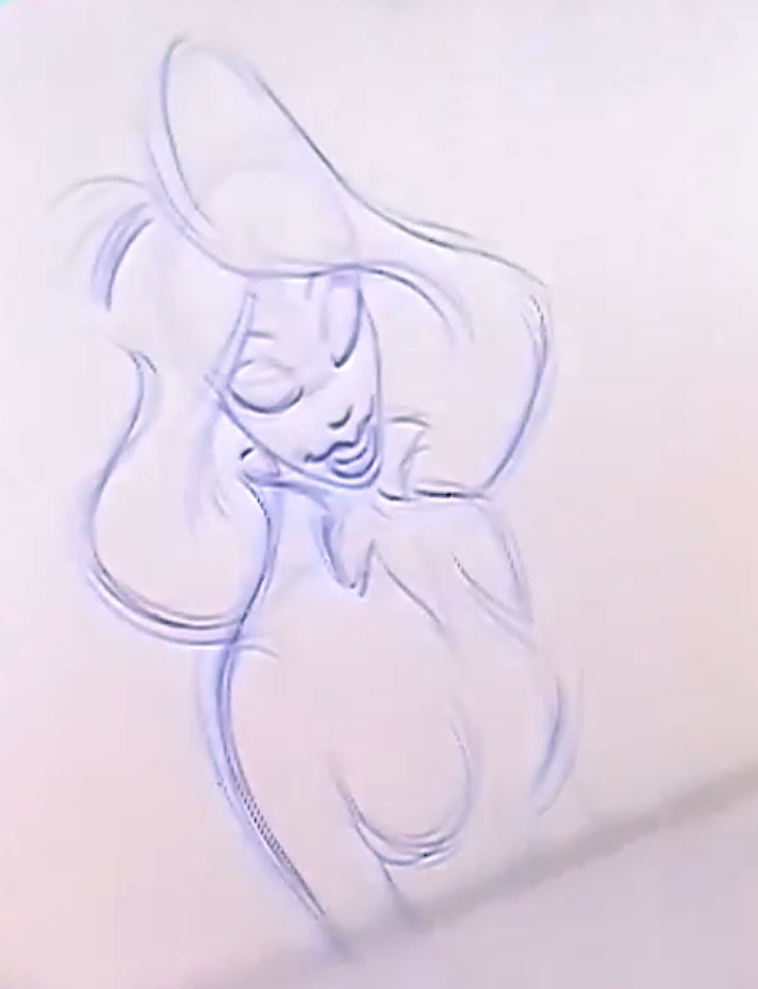 This early version of Jessica does seem to resemble that of a villain. She has a sort of Cruella de Vil quality in the sketches with much more rubber and cartoony expressions. Producer Marc Sturdivant, character designer and writer Mike Giaimo and animator Darrell Van Citters discuss the plot of this ambitious film. It takes place in Hollywood in the 1940's and Roger is framed for the murder of a movie producer. He hires a human detective to help clear his name, leading the audience to a list of unique characters:

"In the course of the story they come across a number of possible suspects. Among them is Jessica Rabbit, Roger's wife. Jessica is a rabbit by marriage only. She's actually an ambitious young starlet who married Roger to further her career. Now that she's been given a part in a film that she wanted, she's cast Roger aside, she doesn't care for him anymore. Roger can't see this. He's blindly in love with her and he just doesn't see Jessica for the cunning and seductive person that she really is."

Roger, Jessica, Baby Herman and Eddie Valiant all remained for the final version of the film - but one character to be done away with was Captain Cleaver, the cartoon detective threatening Eddie to stop working on Roger's case. Though it was rough pencil test animation, we do get to see some interaction between Eddie and Cleaver. Jessica may have also had some costume changes in this early version of the movie. Three different outfits were shown along with more expression sketches.

Once the list of suspects is discussed, animation artist Darrell Van Citters begins to sketch out Jessica on camera. We also see a full stack of the animation he worked on with every frame of Jessica from her scene with Eddie. Then, the live action and animation composite was shown which included the original dialog between Eddie and Jessica from the book, Who Censored Roger Rabbit? by Gary K. Wolf. It's very interesting to see these early incarnations of the characters and story. It's a very unfortunate omission to the DVD's and makes one wonder how much more there may be floating around of test footage, photos, animations, etc. I supposed there could be a Disney Diamond Edition DVD release of Who Framed Roger Rabbit one day, with all of this extra footage - and more.


Thanks to Garrett Gilchrist for this video upload to TheThiefArchive YouTube Channel and for allowing me to post it to this site.