The highly anticipated Sleeping Beauty 17 Inch Heirloom Collection has been revealed - offering one surprise doll. While it was expected Maleficent would be offered in the series, there was still debate if Prince Phillip would be offered. This speculation came after seeing the first male 17 inch doll made last year with Prince Eric from The Little Mermaid. Prince Phillip will be part of the series - as well as Aurora in a blue version of her dress. 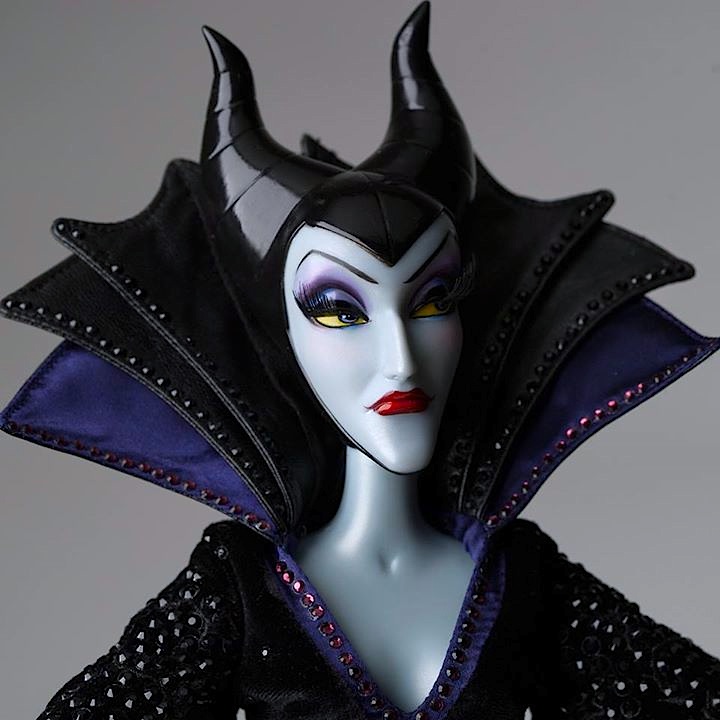 Maleficent, Mistress of all evil, has been the 17 inch doll everyone was waiting for. While it seemed to be a safe bet that she would be released, there's no solid confirmation until Disney makes it official - which they have. People are already weighing in on her look and her dress. Maleficent is dressed slightly like her newer movie counterpart (with a plunging neckline) but the doll is in the likeness of the classic Disney cartoon. It's also worth mention that the close-up image seems to show a flat finish to the dolls skin, while the full picture looks as if the skin is done in a pearlized finish, something that Disney has been doing lately for certain character dolls. Maleficent's horns and head are all one piece of plastic like her current classic Disney Store doll. She will have rooted eyelashes and a full gown with gem adornments and embroidered patterns. 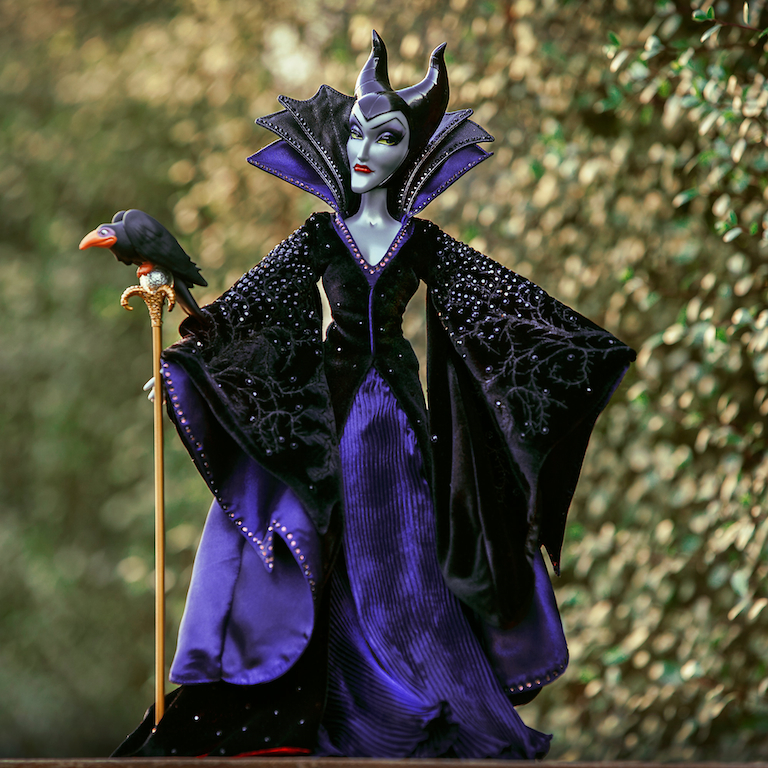 There are two layers to the sleeves and dress - the black top layer and a dark purple bottom layer. The dress is more form fitting to the waist rather than big flowing robes. The neckline is open, much like in the live-action movie. She has a very high collar with three layers (two black and one purple) with it's edges lined with crystals. The sleeves are very large and almost touch the floor. They are cut much like the cartoon, with jagged edges. It also has crystals as well as embroidered thorn patterns. The purple part of the sleeve shows underneath. The bottom skirt is fuller and floor-length. It is a pleated dark purple and does not feature any crystals. The top portion of the dress extends to the back and sides and appears to have a different color on the inside, much like in the movie. The doll also comes with an accessory - Maleficent's staff with her crow, Diablo, perched on top. Maleficent will be a Limited Edition of 4000 and sell for $119.95. It looks as if Disney will be doing things a bit differently this time. The dolls will be available first IN STORE on October 2nd and then they go online at midnight on October 8th: 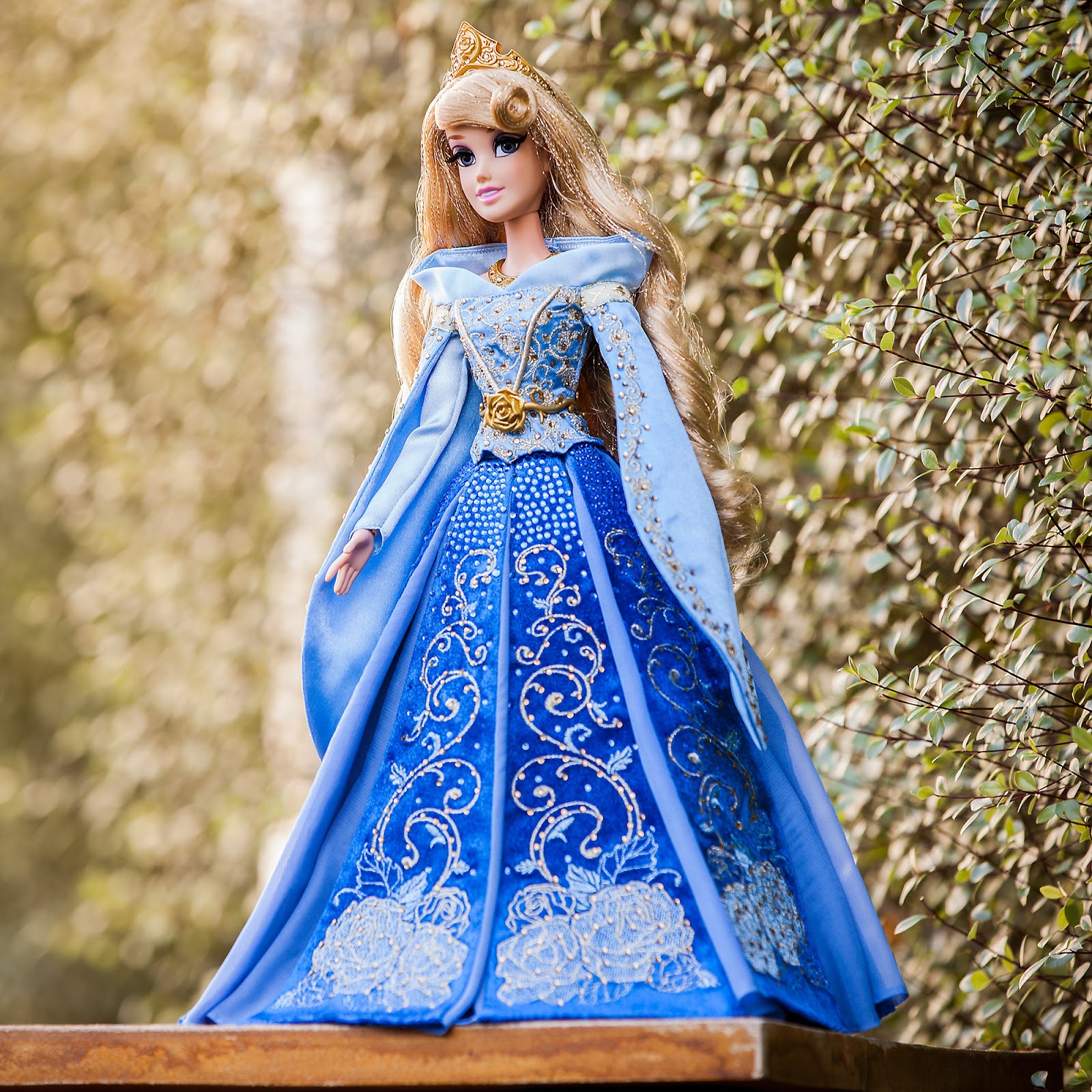 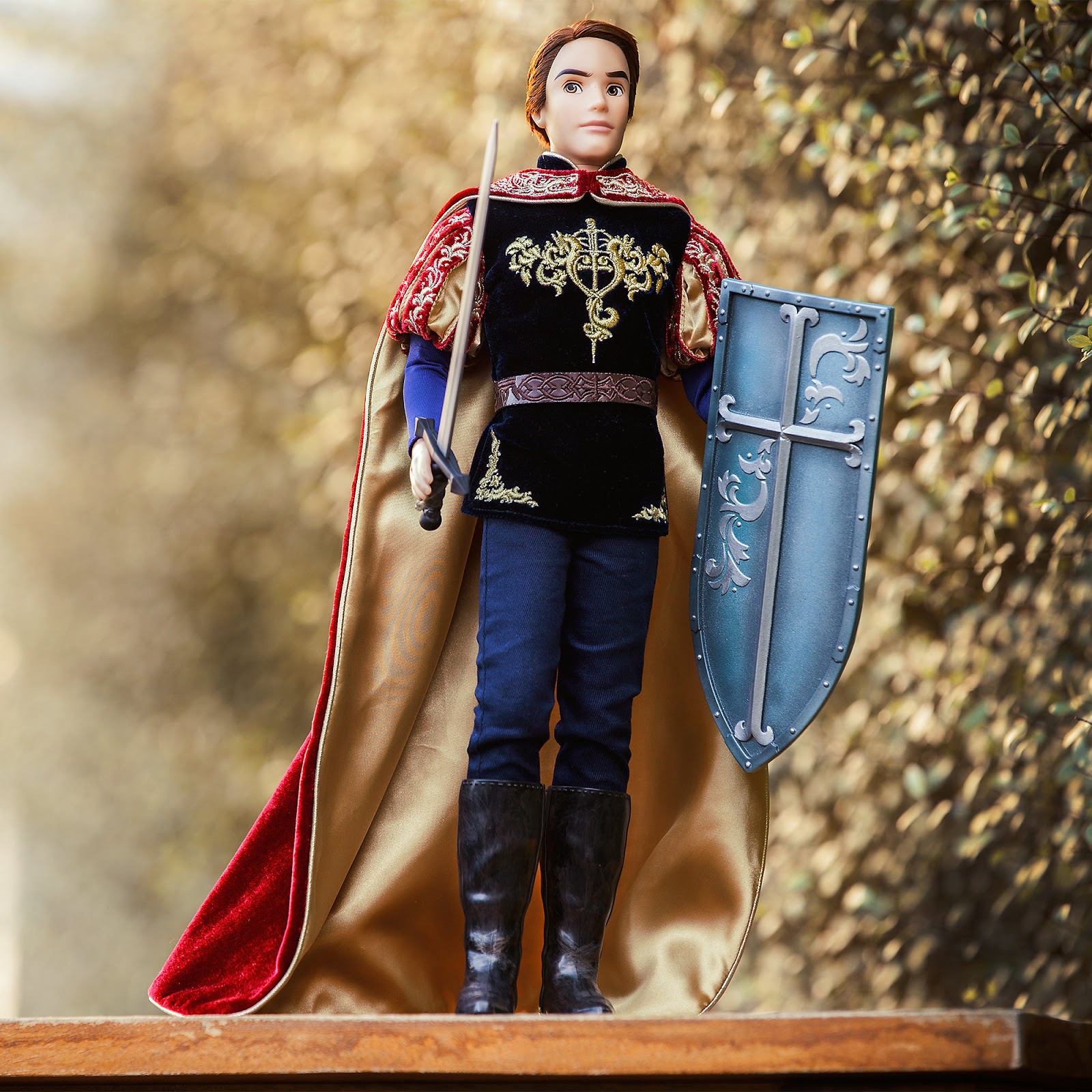 Aurora is the big surprise - although some people who really wanted her in blue may have already bought her in pink - which was the pre-order doll offered back in July. This is the same version as the pink doll, only with the different color scheme. Aurora in blue will be a Limited Edition of 4000. Prince Phillip is the second male 17 inch doll (fueling rumors that next year will see an Aladdin doll released with Jasmine) and he comes with rooted hair, a flowing cape, embroidered tunic and a sword and shield. Though people note that he does not quite look like the cartoon version, this is a very well made and outfitted doll. Prince Phillip will be a Limited Edition of 3500. Both dolls will sell for $119.95 and are also available on October 7th in stores and October 8th online.

For more information, check out Disney's The Buzz Blog and the Disney Store Facebook page.