The internet has been buzzing over the newest princess to be inducted to the Disney Royal Court. Merida is the star of the movie Brave, and the character was celebrated for being just that. She also had a strong distaste for fancy dresses and it wasn't her style to be primped and frilly. However, Disney changed all that and has "princessized" Merida by giving her shapely and darker eyes, a slimmer waist, and a fancy dress. Her flowing hair even seems to cover up her rounder face more. People are insulted, outraged and disappointed in this new change - including the very writer/co-director of Brave herself, Brenda Chapman:
"Because of marketing, little girls gravitate toward princess products, so my goal was to offer up a different kind of princess — a stronger princess that both mothers and daughters could relate to, so mothers wouldn't be pulling their hair out when their little girls were trying to dress or act like this princess. Instead they'd be like, ‘Yeah, you go girl!’ Disney marketing and the powers that be that allow them to do such things should be ashamed of themselves. They have been handed an opportunity on a silver platter to give their consumers something of more substance and quality — THAT WILL STILL SELL — and they have a total disregard for it in the name of their narrow minded view of what will make money. I forget that Disney's goal is to make money without concern for integrity. Silly me.”

Disney's official statement on the matter reads:
"Merida exemplifies what it means to be a Disney Princess through being brave, passionate, and confident and she remains the same strong and determined Merida from the movie whose inner qualities have inspired moms and daughters around the world." 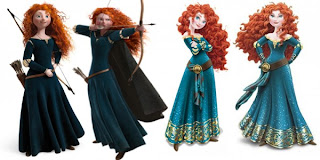 While I was not bothered by the makeover at first, the very idea that Disney would present a character in a way that goes against the values of what that character is about from her very own movie (Disney's movie) is extremely disappointing. Merida might not be your favorite character, but if this kind of thing happens now - it will happen again. All of the Disney Princesses have gone through a makeover, to have fuller hair and new gowns. Some people feel it is overkill, some don't mind the change, but everyone was left wondering why there was a need by Disney to make a princess even prettier.

If you don't agree with Disney's redesign of the Merida character and want to make a change, please CLICK HERE to view and sign the petition, which is rapidly nearing it's signatures goal.