At long last, folk artist Jim Shore added Jessica Rabbit to his extensive library of work. Inspired by quilt patterns and a rosemaling style, Jim Shore's work is easily recognizable. Disney and Enesco teamed up to create the Disney Traditions line, and it has been very popular for many years. Jessica Rabbit joins the list of other characters such as Tinker Bell, The Muppets, Winnie the Pooh, Aladdin, and The Nightmare Before Christmas. Does the Jim Shore Jessica Rabbit statue live up to expectations? Find Out!!

Titled, "Drawn This Way," Jessica Rabbit by Jim Shore was revealed in January of 2012, and went on sale around June of that year. This seems to be one of those items, like the Gallery of Light box, which is not showing up in Disney park locations. It can easily be found online though the Jim Shore website. When I first saw this, I was excited that Jessica was finally being added to this series. I had contacted the Jim Shore company some time before the release to request they make Jessica. It seems I wasn't the only one interested in the character - as she was already on her way to being made. However, I didn't buy this right when it came out. Almost a year since it's release, I decided to purchase it, directly from the site, and I couldn't be more pleased with this statue.

The statue comes in the signature Jim Shore box, with the Disney Traditions logo on the front. While nobody normally pays much attention to the box, presentation is always important. The figure is securely packaged and stands about 10 inches in height. It is made of stone resin and feels very sturdy and solid. The colors are bold and the paint application is perfect. At first glance, you will easily notice all the special, unique qualities about the work of Jim Shore.

"Jessica Rabbit isn't bad… she's just carved that way. From Who Framed Roger Rabbit, Jim Shore brings every inch of this sultry 1940's nightclub siren to life in three dimensional form." The Jim Shore company notes the one factor of this statue that stands out when you see it in person. The statue is resin, but it looks to be carved out of wood. All the bumps and dents give it that special appearance, and adds to the depth of the statue. Another thing people will notice is that quilting pattern which is seen is all of Jim Shore's work. The pattens (a rosemaling style) appears in different ways for each character - usually on their clothing. Jessica Rabbit has this style on her dress and glove, while the perimeter of the base is an angular patch of pink and purple. These patters are likened to quilts, and have a folk art or country feel to them. While I wondered how this style would work for a character like Jessica, I think it was executed wonderfully - and I think they could have went even further with the pattern on her dress.

Jessica's face is quite pleasant and not overly done. It IS on character and works well for this statue. The lines on the glove have a darker wash to them, but this pattern is only on the front of her left arm glove. From the promotional images, it looked as if some of the squares in the glove were a shade darker - however the glove is one solid color on the final piece. The dress pattern is also on the left side, covering Jessica's torso, but on the the front and back of the dress too. It's painted shade darker than the dress and has a wash line around it as well. Jessica is wearing some big, red heels. In promotional images, the high heel was separate from the shoe - however it is all one piece of the shoe here, perhaps making it more sturdy. The perimeter of the base is a pinwheel-style pattern of dark purple and pink. The top of the base is two colors; a lighter and darker purple. The way it is applied to the base makes it appear that Jessica is stepping out into the spotlight.

The bottom of the base is a dark purple. It has four protective pads on the corners, the Disney Traditions/Jim Shore logo, the Walt Disney Showcase Collection stamp, the title of the piece "Drawn This Way" along with the product number. While it is stamped Disney, it is missing the Amblin logo as most all Jessica Rabbit pieces have. This statue, while made by Jim Shore, was produced by Enesco. Enesco is known for taking over the Walt Disney Classics Collection line some years ago, and also produced an array of other Disney merchandise. When I received the statue, I immediatly put it on display. It's a great pice. While this is the same pose from the WDCC Jessica Statue, this is in no way from the same mold. It is a new sculpt and at a different scale. The skin color in the final version of this statue also seems lighter than in promotional photos, but I think this lighter skin tone is much more appropriate, though perhaps a tad too light. 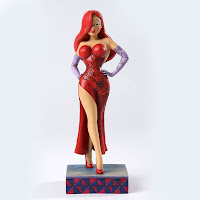 The Disney Traditions Jessica Rabbit Statue by Jim Shore gets a 5! What a wonderful piece. There really isn't anything to complain about and this is a statue that can easily be on display in any home.