NEW Roger And Jessica Shirts At World Of Disney

There isn't enough time for Roger and Jessica Rabbit fans to rest - because the news just keeps coming. This surprised even me though. A good friend of ImNotBad.com has reported on FOUR new shirts which have been released at World of Disney in Walt Disney World (now confirmed at Disneyland also). 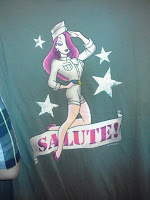 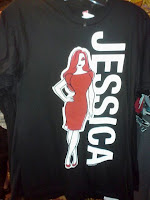 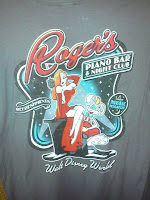 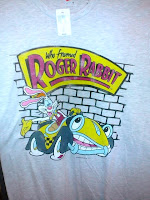 Special Thanks To Laz For The Photos 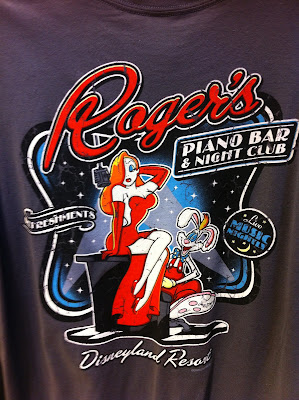 Photo Via Sasaki Time
The first shirt is Jessica Rabbit in a Navy inspired uniform giving you a salute with her left hand - and the world "Salute" below her. The second shirt is a rather odd one. "Jessica" is written in bold on the right - and to the left is an image of Jessica in a very casual short dress with sleeves. It's a fairly different, toned-down look for her and makes me wonder what's the purpose behind this new image. The third shirt is "Roger's - Piano Bar and Night Club." Roger is playing the piano, with Jessica playfully sitting on top of it in her famous pose. The last shirt really gives me more hope that we might be seeing something more than just a few shirts. It's a plain shirt of Roger and Benny the Cab, with the movie logo above them. Each sells for $24.95, and it seems they were released at the beginning of the month.

So, a new book, the animation cel, and four new shirts (one of which has ONLY Roger - who has not had his own shirt in about 20 years!?), I'm feeling a little more confident that possibly the 3D rerelease of the original film is in the works, or big 25th Anniversary plans. Stay Tooned Folks!!!

Be sure to specify sizes when ordering.