Four Who Framed Roger Rabbit shirts were very surprisingly released all at once at World of Disney stores, three of them being Jessica shirts. It generated a bit of a buzz online, since it was a small surge in merchandise for the characters before the holidays - but are these shirts worth the price point. The second one to be reviewed is the Roger's Piano Bar and Night Club Shirt. 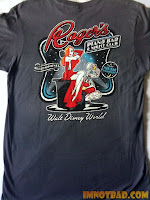 Roger Rabbit shirts were few and far between over the years - though Jessica Rabbit appeared by herself several times. Not only does Roger make an appearance with Jessica on this new shirt, but he also has one of his own with Benny the Cab and the movie logo. Roger, separate from Jessica, has not be on a shirt of his own in maybe 20 years. All this might make you think if Disney is trying to reintroduce and remind people of these characters for some bigger reason. 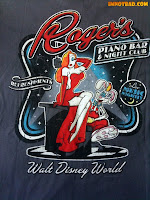 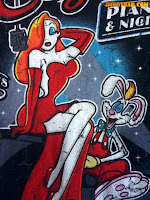 The shirt reviewed here is called Roger's Piano Bar and Night Club. Both Roger AND Jessica are included on the back of this shirt. The shirt fabric is grey. The whole design is printed with a "distressed" look to make the shirt image appear older - so cracks and missing paint areas are normal to appear throughout. Jessica is playfully sitting atop a piano in her famous neon sign pose. Jessica's dress, gloves, lips and shoes are red. Her skin is white. Her hair is orange. Her eyelid is blue. A microphone is hanging down for her to sing into, while her honey bunny, Roger, plays the piano with hearts in his eyes. Roger has a bit more color to him, aside from the white and red, with blue, yellow and pink. Both characters also have highlights and shadows added to them, giving some extra dimension to the overall look. The backdrop is two spotlights, twinkling lights, and blue and grey colors. 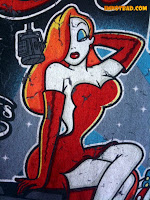 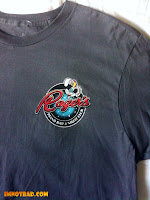 Across the top of the image in red it reads "Roger's" in a stylized script, and to the bottom right of it reads "Piano Bar and Night Club." Near Roger, there is a small circle with a moon and stars which says, "Live Music Nightly," (which you might remember being used on the Patty Cake Lounge shirt.) On the opposite side, near Jessica, it says "Refreshments." At the bottom of the image you will find either "Walt Disney World", or "Disneyland Resort" printed - depending on which park you get your shirt from. The Disney/Amblin stamp is ever so lightly below that. The front of the shirt also has a small image. The left side has Roger's face and says, "Roger's Piano Bar and Night Club." The shirt could easily appeal to anyone, of various ages. Like the other shirts, it's also printed by Hanes, and sells for $24.95 from World of Disney stores in both parks.

The Roger's Piano Bar Shirt gets a 4. It's nice to see a shirt of both Roger and Jessica. The vibrant colors, shadows and highlights all work really well, and the image is sure to please everyone. The price is still a bit high in my opinion.