Four Who Framed Roger Rabbit shirts were very surprisingly released all at once at World of Disney stores, three of them being Jessica shirts. It generated a bit of a buzz online, since it was a small surge in merchandise for the characters before the holidays - but are these shirts worth the price point. The last one to be reviewed is the Jessica Rabbit Salute Shirt. 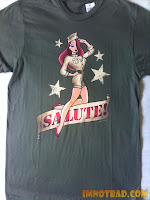 Jessica Rabbit is reporting for duty. She's armed... she's dangerous... she's in Full Color! This Jessica shirt is a little different from the other two as Jessica is in full, bright color. Her skin is not pale white. Her hair isn't flat red. There are shadows and highlights and dimension to this image. The color of the fabric is a dark olive green. Jessica herself is right in the middle, giving you a special salute! I'm not quite sure what inspired such a shirt to be released at this time. When we saw the Hawaiian Jessica shirts, it was after her popular Hawaiian pins had been released. After that, many Hawaiian Jessica Rabbit shirts were released over time, and became a popular look for her. Either way, this is a welcomed surprise for Jessica fans, and no matter what the reason behind the release of more shirts, lets hope there is more to come. 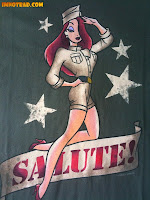 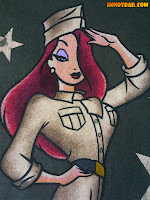 This time around we have Navy Jessica, dressed in a tan shorts and top - with hat to match. Though, she's managed to make it work still using her red high heels. Her hair is also red, her eyelid purple (as well as her eye, but that isn't too noticeable.) Jessica's left had is to her head in a salute - and appropriately she's got one knee resting on a tan batter below which reads "Salute!" in red letters. There are also three large stars around her which have a distressed or "retro" look. The Disney/Amblin stamp is again present. 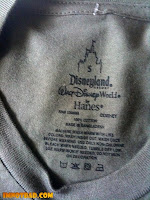 The whole image looks so much better this time around, as there is a lot of shading to the image. It is not hard edged highlights and shadows, but there is fading and blending to the colors. This gives the image much more life and personality. The Hanes tag is again stamped inside the collar, but unlike the Casual Jessica shirt, this one does not have the big red and white Hanes logo, rather only the logo printed in brown along with the info. Just as the other shirts, it was found in World of Disney in Disneyland and Walt Disney World at $24.95. This is another shirt that I think can appeal to almost anyone.

The Jessica Rabbit Salute! Shirt gets a 4. The price is still a bit high in my opinion, but it's a great new image of Jessica with blended colors and highlights.