Between 2006 - 2007, during Jessica Rabbit's pin collection craziness, a few different collectibles were also released. One being the Roger and Jessica Rabbit Snowglobe Frame. Disney had been plussing and adding to their snowglobes and the new one not only featured our favorite toons, but had some cool extras. 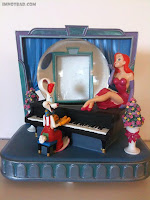 Snowglobes have been a Disney staple for quite a number of years. As of late, they have been getting more elaborate and have many added features to them. Snowglobes are either something you like, or you don't - but when one is released with your favorite (and rarely seen) characters - it's hard to resist buying. Snowglobes are bulky, heavy and can take up a lot of space. The Roger and Jessica Frame Snowglobe is one such item, however, Disney added something to actually make it more worthwhile for display. 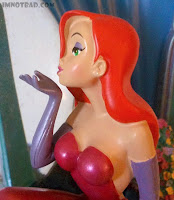 First, there are the character elements. Jessica looks fantastic, even though there is some paint slop and uneven lines, as you can see. Although Jessica's dress is slit on the wrong side, it faces out so we can get a good peek at all that leggyness. She's playfully sitting on top of a grand piano (with her ankles crossed - a lady reveals nothing!) and she's blowing a kiss. Her face seems to be pointed more toward the globe than Roger - but we'll get to that in a moment. Jessica's dress and gloves are painted in pearlized colors to give it extra dimension - and it works so well here. 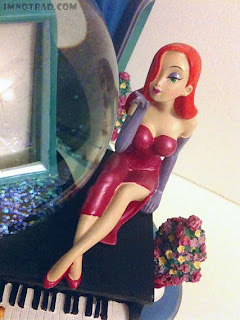 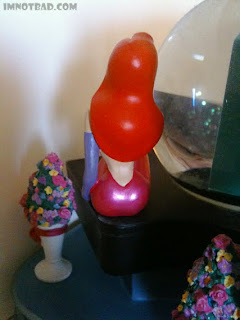 This is a great little statue of Jessica, even if it was not part of the globe. She seems to be on the piano pretty secure - and the hand shes using to blow a kiss is a separate piece - which would hopefully keep any damage or breakage to a minimum. 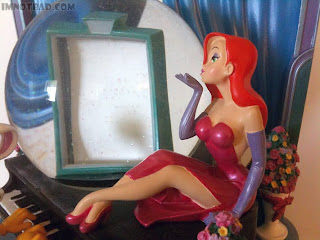 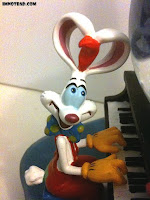 Roger Rabbit is included on this snowglobe - as Disney appeared to be trying to give him more attention by sticking him alongside Jessica. Roger has a cheerful expression and is gazing up, more so at the globe. Roger's ears are in the shape of a heart, and all his paint colors are correct. There are some uneven paint lines on him too, but not as much as Jessica. Roger is playing the piano, and sitting on a little stool. The stool legs actually have one big piece at the bottom, so that he's not balancing on small stool legs - this makes the piece much more secure. 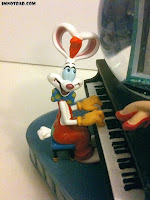 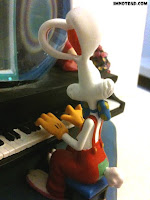 Roger's neck, tail and arms are very thin. They are probably the most fragile of the piece, but they don't seem flimsy. You'll want to take extra care though when taking this in and out of the styrofoam box and with general handling. 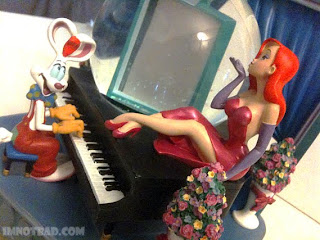 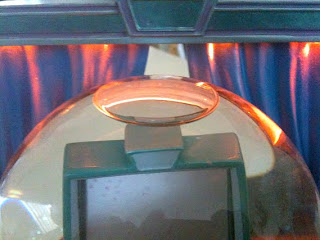 Starting with the extra features of this globe is that it actually lights up. It requires batteries (which were included when originally ordering) and there is a small switch on the bottom. Four small lights above the curtains give the piece an added touch and more worthy of display. However, we get to the biggest drawback of any snowglobe - you can see from the photo there is a bubble that has formed on the inside. The globes are all completely full when released but over time air seeps in, causing the unsightly bubble of doom. Disney tried to combat this by sometimes adding a small element on top of the bubble - like another character or some item that fits the theme of the piece. 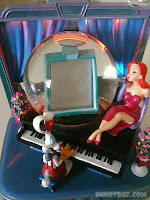 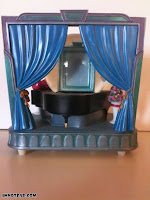 The background and base has a modern, art-deco look to it - almost reminiscent of the Jessica's store colors in purple and blue. It's all in pearlized paint, except for the actual "floor." 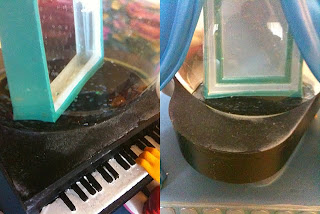 Having this piece in the styrofoam for many years, I noticed something on the black piano. I'm not sure what caused this white residue on the piece, and if it's from the styrofoam or plastic bag the piece came in, but I was able to get pretty much all of it off by wiping it down with a cloth. 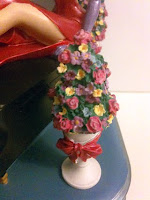 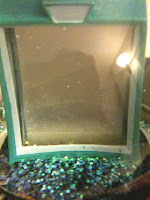 There is quite a bit of detail put into the piece. There are three flower vases around the stage, and upon close inspection you can see that each leaf and petal is sculpted perfectly. There is glitter in the dome, which you do have to shake to get the glitter to move around. In the last few years, Disney has added a blower device in many of the snowglobes - eliminating the need to shake it and also keeping the glitter always moving around in the dome. This piece does not have the blower device though. Inside the dome is an actual picture frame, allowing you to add a small photo so it appears as if it is inside. 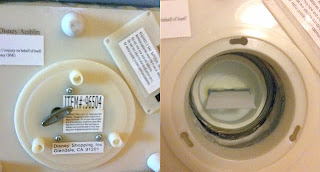 The bottom of the base is where you need to unscrew to open it. What comes out is also the music box itself. Up inside you can see a slot for your photo. This is why it appears that Jessica and Roger and looking more at the dome than each other. When you put a photo in there, they will be looking at you! This is a great element to the piece, but also maybe a dangerous one. With the frame inside the dome, should any of the seal break away or degrade over time, then the solution in side will leak out. And contrary to what many people think, it's not water inside. There is a special solution in there to keep it clean and allow the glitter to flow better. 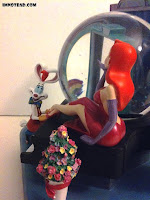 Not only does it have great character sculptures, light up, and act as a frame - the music box plays Jessica's theme song. Disney really tried to add value to this snowglobe, and it shows. This globe was designed by artist, Jennifer Oliver. In some of my other merchandise reviews you may remember she designed the first ever LE 100 Jessica Rabbit six-pin set from Disney Auctions in 2004, and several other pins. I've been attempting to get an interview with Miss Oliver for some time now, but so far no luck. 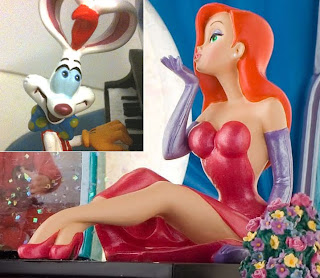 The Roger and Jessica Rabbit Snowglobe Frame gets a 4. The sculpting is well done, the colors and paint - even though there are some uneven lines. The bubble will form in the globe, which is annoying - but it's a piece worth picking up.