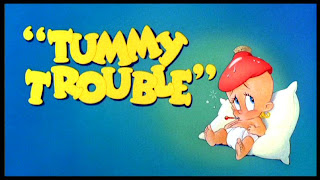 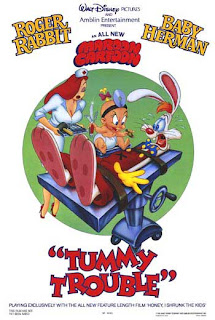 Tummy Trouble was the first of three animated Roger Rabbit shorts, created after the Who Framed Roger Rabbit movie. The cartoons were released as a tie-in to other movies showing before the feature film it accompanied. Tummy Trouble appeared before Honey, I Shrunk the Kids on June 23, 1989, a year after the movie was released. This short was also later on the VHS release of Honey, I Shrunk the Kids. 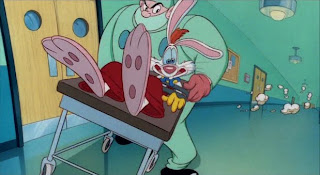 The other two Roger cartoons did not appear on the VHS tapes with the feature movie -so for a long time Tummy Trouble was the only one available. In 1996, Disney eventually released The Best Of Roger Rabbit on VHS which included all three short films (shown after a lengthy music video starring Timon and Pumba.) 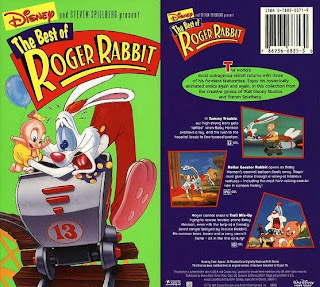 When the DVD was rereleased as a special edition, it included all three short cartoons in very high quality. They were released as extras - so there were no actual extras available for the cartoons like photo galleries, TV spots or making of. The cartoons look great, but they all seemed to have a bit of a yellow tint to them - which I have corrected in these photos.

For anyone who doesn't know the story, Roger is babysitting Baby Herman who ends up swallowing a toy rattle. In a panic, Roger rushes him to the hospital. Baby Herman burps up the rattle, but Roger accidentally swallows it. When surgeons enter and hear the rattle inside Roger, they assume he's Baby Herman and take him into surgery. 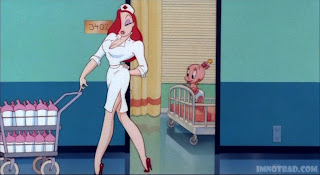 We are treated to a shot of some familiar legs - belonging to Jessica Rabbit - dressed as a nurse. Baby Herman spots her pushing a cart of bottles and crawls after her. One bottle falls off the cart and Baby Herman crawls after it (yeah that was Jessica's big scene unfortunately) and he ends up in the operating room with Roger.

When Baby Herman sees a surgery laser and thinks it's a big baby bottle, he tries to get at it - causing all sorts of mishaps that send him - and Roger - all over the hospital similar to the cartoon at the beginning of the Who Framed Roger Rabbit movie.

When Roger finally catches up with Baby Herman, and the rattle is safely in hand - someone shows Roger the hospital bill, which makes him pass out and Baby Herman swallow the rattle again. The cartoon ends and in a surprise moment we are taken out of the cartoon and into the real world - again like the feature film. This segment is not done as convincingly as the movie and only lasts a couple of minutes - but we do get to see one last shot of Jessica. This scene is actually pretty dark and I had to brighten up the photos a lot. Jessica is also further into the frame so I left the pictures in original size so you can see her clearly. 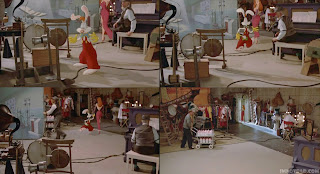 This was a fun cartoon and expertly animated. It's a shame there were only three cartoons (a fourth short was already halfway complete called Hare in my Soup, set to be released in front of Toy Story in 1995, and a fifth was in the works with Roger visiting the opera.) Thankfully the three films made their way to DVD and if their ever is a Blu-Ray released hopfully their will be some color correction and extra features for each short.