When wonder and wishes and whimsy collided, the world created Miss Mindy. Now, Miss Mindy is creating wondrous works of her own featuring some of Disney's most memorable characters. Snow White, Evil Queen and Ariel have been fantastically recreated as a Miss Mindy signature sculpture, with ornate miniature details and lights. Nestled inside each is a tiny scene from the movie - Snow white has the Seven Dwarfs cottage, Evil Queen has the Magic Mirror, and Ariel has Ursula. There have also been other characters like Bo Peep and Minnie Mouse. 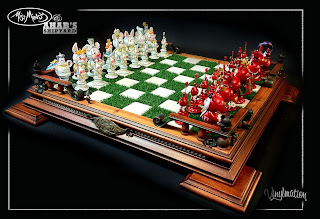 As if her talents didn't speak for themselves, take a look at this hand-crafted, artfully engineered Wonderland Chess Set, a combined effort by Miss Mindy and Ahab's Shipyard which debuted at D23 2013. It is a one-of-a-kind piece using elements of both Lewis Caroll and Disney's version of Alice in Wonderland. If you look closely, there are 32 highly detailed and customized 3 inch and Jr. Vinylmation figures by Mindy. Using the Vinylmation figure as the base, each one is hand pained and redecorated to fit the topsy-turvy theme of Wonderland.

The board, by Ahab's Shipyard, combines pine and bass woods with resin, stone and synthetic turf. I suppose if you're going to play Wonderland Chess, you should expect no less than the level of this creation. 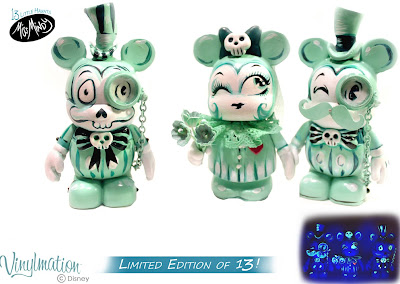 Starting October 4, 2013, Miss Mindy will be the Artist in Residence at WonderGround Gallery in the Downtown Disneyland District on October 4, 5, 11, 12, 18, 19, 25 and 26 from 6:30 p.m. – 9:30p.m. each day. She has created several new 3 inch Vinylmation figures titled 13 Little Haunts, all of them hand painted and embellished with sculpture and glow-in-the-dark paint. Each is a one-of-a-kind figure and will sell for $250.00. As an especially haunting surprise, there is only one number “13” design, up for grabs to the first moral who gets their hands on it! 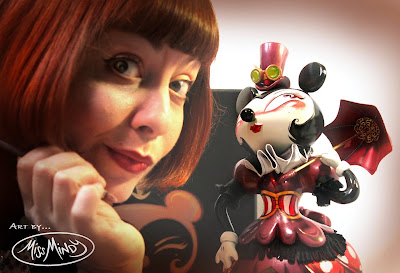 Could a Jessica Rabbit statue ever be possible? Well, Mindy is naturally drawn to redheads, and has stated that Jessica could make an excellent addition to the series.