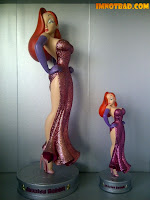 There are many things to consider when spending $90 for a statue - like, if you can afford it, or if you have room for it. But, shoddy work from Disney is not something you would not be one of the things you would think of. Back in 2005, the Jessica Rabbit big figure was released in all Disney parks, and eventually made its way to the Disney Store website years later. At almost $200, standing around two feet tall, this Jessica statue was worth every penny. The big figure I ordered back then did sadly arrive broken. Disney replaced it no questions asked. Recently a smaller version of the Big Figure was released in Disney Park locations. I think it's officially being called the Medium Figure, but it has also simply been called a Jessica Rabbit sculpture. This smaller version though does not hold up to any expectations and has WAY too many issues to look out for that it's probably better to skip buying it! 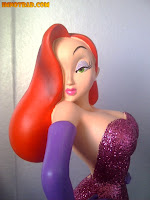 The smaller version is a little less than half the size of the big figure - but upon first look comparing the two, you can clearly see there have been some alterations. Aside from the glitter color, Jessica's hair, waist and legs seem to have been shortened a bit. It also has the same base as the big figure, and even though the base for the smaller version is not as wide, it is pretty much almost the same height. There are some very legitimate complaints about this statue, and if you plan to buy this statue there are things you will have to look out for. Friends of ImNotBad.com have sent in photos that were pretty surprising to me. First, there is the very very VERY poor paint application on these statues. The lines are sloppy - and it's not small nit-picking either! 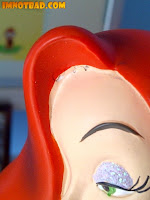 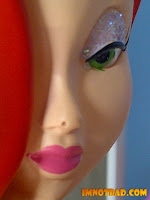 As if sloppy paint was not enough, there is damage to these statues. I can't believe these got through to production for sale, but these statues in particular had very noticeable air bubbles that had formed when it was being made. Especially being right on Jessica's nose, it is an eyesore. On top of that, there is flaking paint. That's right - the paint is flaking and chipping off the statue. I'm not sure what would have caused it, but a figure to be sold like this is totally unacceptable. And these issues were not present in only one figure, but two that someone tried to order. When attempting to get a Disney castmember to understand the issue, he was made to feel he was being particular about his purchase. As you can see from the photos, for Disney to sell a statue for $90 with these conditions is far from okay. 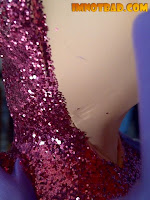 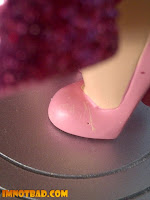 Reports from others have confirmed the Jessica Rabbit Medium Figure they had seen on display was in fact very sloppily painted - so this is not an isolated incident. It is not usually common practice for Castmembers to inspect merchandise before it is sent out should it be packaged and taped up - but if you plan on buying this by phone or in person, you might want to think twice and see if a Castmember can assist you with this. There are other Big Figures being scaled down to this size so I hear. I'm not sure why other than it's not easy to bring a Big Figure on a plane if you are traveling - so the smaller versions might appeal to people with its smaller size and price, but there is no excuse for this kind of awful work on a Disney Statue. 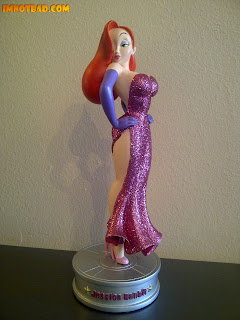