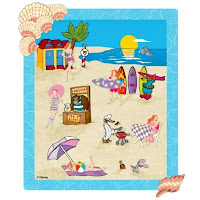 Back in 2007, the Jessica pins were overflowing. Among them was a Jessica World Travel series, a Halloween Costume series, a Valentine set, and two framed sets. Possibly in an effort to keep costs down, a new kind of set was created called Card Sets. These were a set of pins on a large background card, but they were not framed. The framed sets did not seem to be doing well - and not surprising with releasing two LE 1000 Jessica framed sets so close to each other, both of them eventually went on sale for about 75% off the original price.


The new card sets were previewed at a pin event and was also included in a flyer give-away. This was like gold to a pin collector. Not only were their pictures of Disney Shopping pins to come throughout the whole year, but the edition size And date of release. However, we all got to see the folly of what was originally thought as a great idea in that pin flyer. 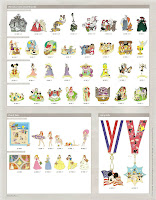 When people were anxiously awaiting a certain pin to be released according to the flyer given out by Disney, you could imagine their frustration after waiting all night to find it switched with some other release. To further that, the previews on the flyer were of the original art of the pins, not actual photos of the pins themselves. Often there were changes made to the final designs, or sometimes a pin actually looked better in pin form than the art could do justice. Needless to say then every week it was still a bit of a mystery as to if the pins listed in the flyer were actually coming out, and if they would look as good as the art. Not surprisingly is that Disney never created any more flyers of future pin releases after that one. 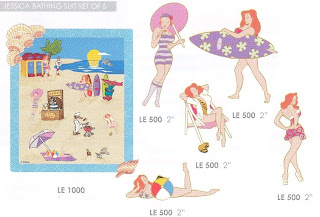 The Jessica Bathing Suit 5 pin set was released on August 6th (a date not given in the flyer) and it was the very first Card Set ever released on Disney Shopping. The pins were on the same card and unframed. The card itself has a light blue border with white shell outlines in it. There is a group of tan/pink scallop shells at the top left and one spiral shell at the bottom right. The background is a cartoon beach at sunset. 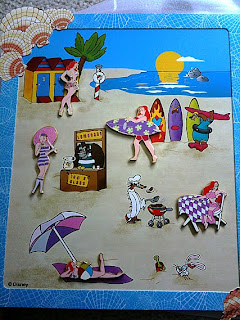 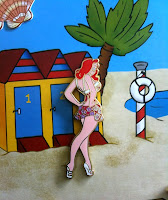 The first pin, Jessica is giving an over the shoulder glance wearing a dark pink with purple flowered bathing suit and white sandals. The bathing suit top is opened in the back and it's a pretty sexy yet classic looking bathing suit. We all know that pose well, as it is one she is most familiar for. Behind this pin the scene is three dressing rooms, a palm tree and a pole holding a life preserver.


The next pin is Jessica walking in a short maroon wetsuit holding a purple surfboard with light green flowers. Behind this pin the scene is Stupid Weasel in a wetsuit holding a surfboard over his head and standing next to 3 surfboards, one with flames and a Mickey emblem, the other with a shark-type face and the other is neon green. This pin was slightly changed from the original concept art, which did not include the bathing suit shorts. It also appears that in the concept art Jessica is covering the surf board that would later show the Mickey logo. For anyone keeping score, this is one of the few pins to show Jessica out of those huge high heels, and the first time we see her walking flat footed. Jessica likes to surf! Who knew? 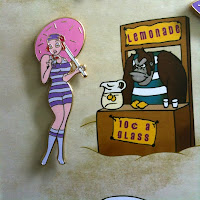 A third pin shows Jessica in a light and dark purple striped bathing suit from the 1920's with knee-length light purple socks. She wears a purple hat with a flower on it, holding a pink umbrella and sipping a drink. Next to this pin the scene is Bongo the Gorilla in a white and blue striped bathing suit at a Lemonade stand.


The fourth pin is Jessica sitting at a table wearing purple bracelets, a pink bikini top and pink sarong. The scene next to the pin is Psycho Weasel wearing a chef hat at a bar-b-que grill flipping a hamburger. This is a totally different pin from the original concept art. The original shows Jessica in a tiger print bathing suit and white robe with her arms behind her head sitting cross legged in a pink and white beach chair with her yellow sandals.

The last pin is Jessica laying down with one leg kicked up and she is holding a beach ball and wearing a purple/green bikini and holding a pair of sunglasses. Behind this pin is a dark and light pink and purple beach umbrella and purple beach towel. Nearby is Roger Rabbit's head popping out of the sand and a sand bucket and shovel.

The pins had the usual rubber Mickey head pinbacks and all pins had two posts except for the first pin. 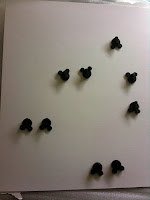 Things are changing as of 2010, but this pin set did come in a plastic bag but also in a foam-like bag to protect it. 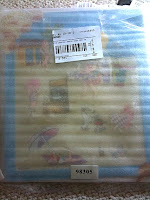 I don't recall hearing any complaints about this set. It's not known why Disney changed one pin entirely. Perhaps it was the pose or outfit - although if Disney has no problem dressing Jessica as a French Maid, I don't see what is wrong with the tiger-print bathing suit. As of now that pin has never been released.

This is a great set. The cost was not too bad at $49.95 per set (yes that's over $50 with shipping) but for the work, 5 pins, and the card, it's worth it. The downside is being an LE 1000. I don't remember if this went on sale but an LE 500 would have been more than enough (as the flyer incorrectly stated the pins being LE 500 but the card at LE 100, leaving people guessing what the edition size would really be). The card is stamped © Disney - and not Disney/Amblin as it is supposed to be since both companies own half of the rights. 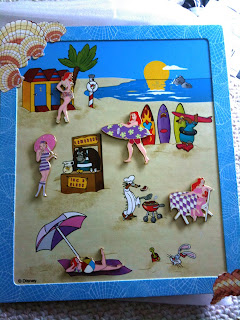 This gets a 4. It was nice to see Disney do something different in terms of a Card Set - and also getting brave and bolder with their use of Jessica and different poses & outfits for her. But, what ever did happen to that changed pin?