Back in the day, between 1989 - 1992, Jessica Rabbit was lucky enough to have her very own store called Jessica's. It's a shame that it was not open very long - and many people had never been there, not to mention ever knew it existed. There were so many different things available and it was easy to let some of those things slip through the cracks if you thought the store was going to be open for a long time. One cool items that you can still find now and then are the Jessica's keychains. There were two kinds, one small lucite keychain and another larger glittered version. 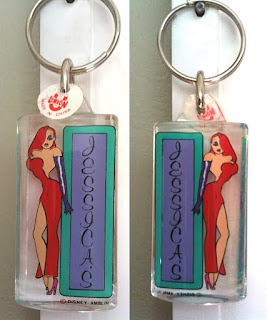 Lucite keychains were normally ones with an image inside and convex plastic around it. This particular keychain is double sided with an image of Jessica Rabbit leaning against the Jessica's sign. 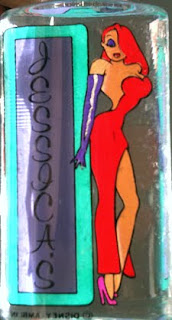 The image looks a lot better on one side than the other. The lines are cleaner and there is less slop. That side however seems to be the opposite side. The Jessica's sign though is not clear double-sided like her image because if it were, when you turned it around the letters would be backwards. What does give it away that this is the back side is the Disney/Amblin copyright at the bottom which you can see is in fact backwards. It's nice that they went a step further to be enable the image to be enjoyed by both sides with the Jessica's sign writing. The sign is bordered in light blue with a purple background with black script letters going down the length and Jessica is in her usual dress. 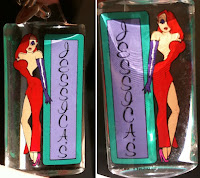 There isn't too much you could say about this keychain to be negative. It's a nice little item that is made to be used everyday and you can still find this on eBay now and again for a fair price. I got mine for only $1.00. The bigger reason to have this, if you are a Jessica collector, is proof of her store's existence in the Jessica's sign that she is standing next to.

The Small Jessica's Store Keychain gets a 4. It's hard to complain about this keychain, a simple everyday item. Its real points come in because of the Jessica's sign and being two sided. This is one of the very few items to have the store logo. This keychain is also solid enough to stand the test of time.