Back in 2007, it seems other Disney parks were realizing the popularity of Jessica Rabbit. Disneyland Paris released there own line of Jessica merchandise, including an awesome statue. Tokyo Disneyland also released some new Jessica items, but this time they were not technically "collectibles." 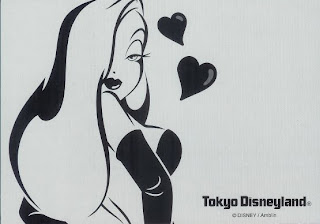 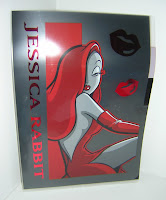 Finally, for the first time in about twenty years, we got some brand new Jessica Rabbit stationery. Unlike a statue or a pin, these items were made to actually be used. However, there was one major catch to it all. These items were only available in Tokyo Disneyland - and I have only seen these items once on eBay since their release in 2007. As if that was not enough, these particular items were being sold for way too much in my opinion. 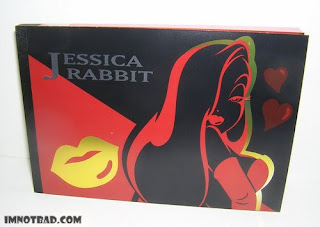 The price did not keep me from buying a few things, and I am glad I did spend the money since these all seem to be very rare Jessica items in the US. One thing I bought was the small memo pad. It's a standard 5x7 pad with a close-up outline photo of Jessica in red. It's her classic over-the-shoulder look, but it seems to be slightly updated. It's accented with a foil outline and pair of lips. Of course there are two hearts nearby and the whole pad is a black and red color scheme. Jessica's name is also on it in gray, and the whole thing is pretty artistic and striking. 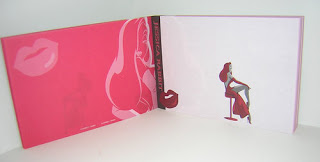 The inside is even better. There is a picture of Jessica in the middle of the page in white and red, sitting with one leg kicked up. There is also her name and kiss on the left border. The paper is a very light pink. Even on the back of the page there is more, with Jessica's outline and kiss in pink against dark pink. What I like about the memo pad is that the back cover not only has Jessica again but also the Tokyo Disneyland logo.

Two different file folders were available. I did not get these so I don't know if they are for files or if they do have pockets in them - which I imagine they do. Both folders are dark gray and one has a picture of Jessica in white and red, with her name and kisses in a red foil. The other is Jessica's outline again and name in red foil, with red kisses. 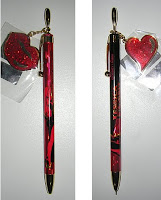 There was also a dangle pen and refillable lead pencil. I did get the dangle pen and it is great. It's a click top pen with a red glitter kiss dangeling from a chain. Jessica is on the length of the barrel of the pen in black and red, and the background is a shiny red foil. The pencil is pretty much the same except the dangle is a red heart and the photo of Jessica and her name take up the width of the pen.

I regret not getting the notebook. It's a standard 8½ x 11 spiral bound notebook. It has a gold sparkle background with Jessica looking over her shoulder outlined in black and also in gold foil with a red and black background. Her name is also outlined in the gold foil. Since I didn't get this I don't know what the inside looks like (if there are any photos of Jessica inside like the memo pad or if it is just regular ruled paper.) 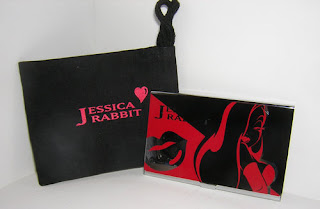 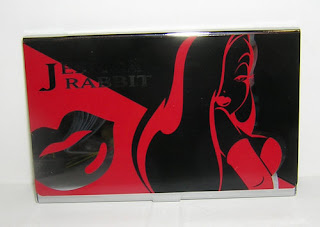 There was also a fancy business card holder - a definite first for a Jessica Rabbit item. The card had a black cloth carry case with Jessica's name on the front, and a heart too. The metal card holder front was pretty much the same as the memo pad cover except her name, kiss and accent outline are just the meatal of the case showing through - with Jessica again outlined in red against black.

Lastly was the bookmark. It was selling for somewhere around $70 on ebay, and as rare as these items are, I think the seller was asking way too much! The book mark is metal (not sure it it is sterling silver or just plated, etc) and again there is the familir look-over-the-shoulder pose outlined in red. There is a red ribbon at the top to hang out of the book and the ends of the ribbon are a heart and glittered kiss. 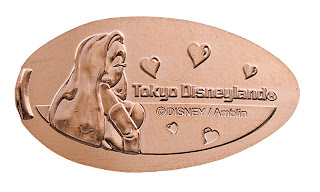 On a side note, a special Jessica Rabbit pressed penny was also available in certain locations in Tokyo Disneyland. You have to supply the penny - and normally pay 50 cents or so for it to be pressed. You put it into a machine, select the design you want and turn the crank to watch your penny be pressed!

The Tokyo Disneyland Jessica stationery gets a 3½. We finally got to see some great new merchandise of Jessica, stuff that can actually be used. Although they were so hard to come by being only available in Tokyo. The use of the two same poses and color scheme is a little boring. These are the kind of items that need to be released in the US.