The Jessica's store, which once existed in Pleasure Island way back between 1989 to 1992, offered the biggest assortment of Jessica merchandise ever. Pins, statues and other kitschy collectibles were not among the majority at that time. Instead, there were shirts, mugs, neck ties and magnets.

There were a lot of items that had use in the home, something we have not seen much of since then (with the exception of a few mugs and journals - not counting the Very Rare Jessica stationery released in Tokyo Disneyland). One such fun and inexpensive item was the Jessica Rabbit magnet, available only at the Jessica's store in Pleasure Island. The magnet was full color and shows Jessica in her most iconic look-over-the-shoulder pose. It also was not just a big, square magnet with a photo of Jessica either. It was shaped in her form and painted. 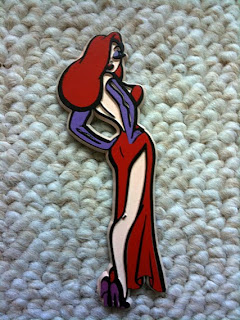 With such an item, you can't always capture small detail, but this works for what it is - just a cute fridge magnet that might hold up a report card or grocery list. They used a few colors - red, peach dark purple and light purple. Her hair is red here from what it appears, not orange as it should be but it isn't something that really changes her look. I suppose they made a little more effort making her shoes the correct color rather than just making them the same color as the gloves. She is also outlined in black which is painted and not just the magnet color coming through. The paintwork can be a little sloppy or uneven in areas, and it might be more of a silk-screen technique rather than hand painted.

Like pretty much all Who Framed Roger Rabbit related merchandise, they had to be stamped Disney/Amblin - since both companies jointly owned the rights to the film and the characters. 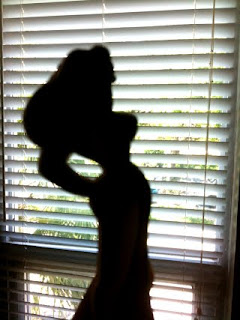 I suppose there is not much you can say about a magnet but such Jessica Rabbit related houseware has not been available in a long time. I suppose it would have been cool to see a glittered version of this magnet too, but as for now, its all we have. The Jessica's store magnet does show up online from time to time so you can still get your hands on one.

The Jessica's Store Glittered Keychain gets a 3½. I had previously given this a 3. It's cute, maybe a little sloppy paint, but a glitter version would have been cooler.