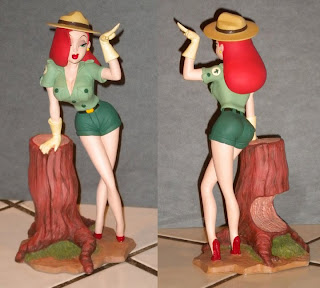 Electric Tiki Design, best known for their cartoony statues and maquettes, were given the opportunity to create some of Disney's most entertaining characters. It was quite a surprise that Jessica Rabbit was to have not one, but two different statues. One of the team designers, Tracy M Lee, worked for Disney Animation on several characters - including Jessica - so finally we got to see a very accurate representation of her in statue form.

The first Jessica statue by Electric Tiki was from Rollercoaster Rabbit, and shows her wearing a concept outfit that was not in the movie. The statue was available in several different colors - mint green, light blue, pink, purple, black leather (just kidding about the last one).


Park Ranger Jessica Rabbit - from the short film Trail Mix-Up, will be coming out around June 2011 and was shown at the San Diego Comic-Con in July 2010. You can check the Electric Tiki Facbook page for more photos and news.

There was supposed to be an exclusive version of Park Ranger Jessica released, but it does not appear this is happening anymore.