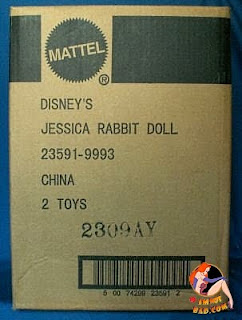 It was unfortunate that a Jessica Rabbit doll slipped through the merchandise cracks back in 1988, but at that time, a sexy cartoon doll was something I'm sure few retailers were going to risk creating. Although adults had been collecting such things for years now, that was a time before the internet would bring all the geeks together to shop in the safety of their mother's basement - thus also making it way before the demand for female collectibles was realized. 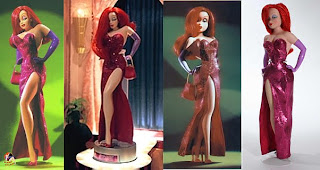 Some time in 1999, a sneak peek image of the first ever Jessica Rabbit doll was released and made its way through the web. It was more than stunning, and looked to be everything a Jessica collector could imagine... but things changed. Another image was found of the doll on display at Toy Fair, with slight variations. The modifications were not all that bad and is something that happens to products all the time. Jessica was prominently featured too, along with a nice display of the Ink and Paint Club stage. But, when a third image was released, replacing the first on many sites, it showed a very different look, making things bit confusing. In the end the doll actually released seemed like a combination of all three, but looked less like the original image. Let’s examine.

First, the face and hair. The initial image released was actually very close to what Jessica should look like. She had the larger eyelid, small nose and bigger lower lip. The Toy Fair image looked similar except her hair was longer and skin-tone lighter. The new image was totally different though. Her eyelid was sculpted a lot smaller and she now had a deep line of eye shadow around it. Her eyes were more open. Her expression was no longer a Mona Lisa smile, but rather a pout. Her upper lip was much larger than the lower and her face was very rounded.

The body was the next big difference. The skin-tones seemed to change a little, along with her bust size. The arms appear to have changed slightly with more attention on the purple coloration than the shape. The dress in the last photo puts the slit on the correct side and the over all dress look changed. The leg, which had a nice slight bend to it in the first images, is totally taken away in the last- going just straight down to her high heels, which are sculpted onto the doll. 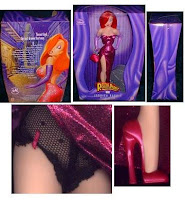 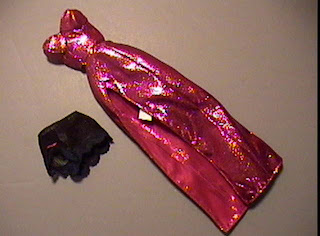 The end result uses much of the elements from the latter promo photo. However, the doll still looks good for the first attempt ever. The doll stands at about 14 inches tall. The dress is an oddly stiff material though, but I suppose it's better made to stay in place. The glitter seems to be put on top of the material rather than part of it, but I don't recall any glitter coming off very easily - which is a plus. The purse is stitched to the dress which is a little annoying, and if you are planning to remove her from the box, be prepared to take some time with it. She is articulate at her neck, biceps and at an odd waist angle. She also wears gold earrings and black panties - settling that nasty rumor once and for all. 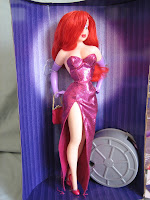 The other accessory Jessica comes with is her stand. The backing is a clear plastic which goes around her waist and connects to the base. The base is shaped like a film reel with her name on a decal across the side. The box is an interesting shape with an hourglass type window that extends to the top of the box. The color is a deep purple that really presents the doll well, especially with the spotlight look behind her. The movie logo is fantastic as the red finished with glitter. 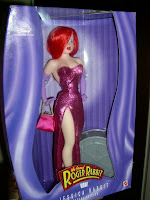 I'm not exactly sure why this was called WOW! Jessica Rabbit Special Edition. The title to Who Framed Roger Rabbit did not end with a question mark, as it was considered bad luck in Hollywood to end your movie title with one. Perhaps they should have used this rule here when creating the doll - WOW!. Also, calling it a Special Edition is peculiar, since there was no other edition of this doll.

There was no official reason given for the change to the doll's look. Read the Exclusive interview with the Jessica Mattel Doll designer, Lisa Temming, to find out plenty of details about this doll. According to a doll sculpting website, "This was a licensed sculpt that was done for the Disney licensing department at Mattel. This was a very hot property and so took many meetings between Disney and Mattel to get the final approval. Once on the shelves, it was an extremely hot seller."

This gets a 3½ because of that teaser image being released not actually being the doll offered. It's good for a first time Jessica Rabbit, and the details and colors are all correct here, but the unreleased prototype set expectations very high.