Zany film characters you can collect, bend and pose!

The mystery continues! Was there a will... Who bumped off Acme... Who Framed Roger Rabbit... What part does Baby Herman play... Detective Eddie Valiant is on the case. Perhaps it was the evil Judge Doom and his Weasel companions... or maybe the ambitious, beautiful Jessica is behind it all...

Re-enact all the action or create your own adventures with your Who Framed Roger Rabbit™ Flexies™: Collect Them All! 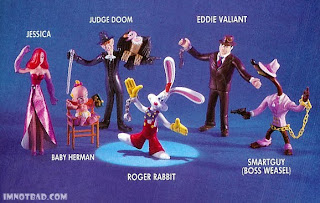 Among the very first official merchandise released and, as of 2010, the only thing close to Roger Rabbit Action Figures we've seen were called "Animates" by LJN. The figures were in the scaled size like Star Wars or G.I. Joe (3 3/4") yet there were only 4 characters released (Roger, Eddie, Judge Doom and Boss Weasel.) Baby Herman and Jessica were NOT included. However, a larger scale set of bendy figures called Flexies were released to include all six of them. Benny the Cab was released in scale for the small 3 3/4" figures but not made for the larger Flexies. Roger was the only character released as a Super Flexie, a larger scale bendy figure. 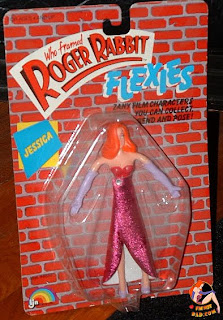 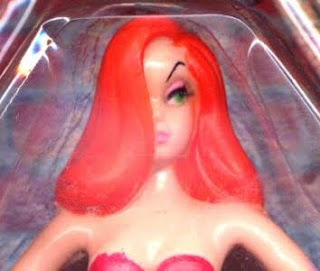 All six Flexies were made of rubber with a wire inside so you can "pose" them in various positions. I'm not sure if I remember correctly, but most bendy figures released, around that time anyway, always had a pair of holes on the back of their limbs and neck. This was done so that the rubber had a little more give when being posed, but as you can imagine, is an eyesore. One of the many problems with bendy figures was that the paint often wore off, rubber couldn't capture facial or costume details, the wire inside snapped rendering it useless or the broken wire pierced through the rubber and protruded out the skin of the figure. In the case of these figures, the paint is Very sloppy and a bit more faded than in the promotional photos.

The name Flexies was the nickname given by the crew for the life size stand-in dolls used in the film. To better assist the actors and cameraman in visualizing where the animated characters should be, big bendable foam figures were created - at least for Roger, Baby Herman and the Weasels. So I imagine that may have inspired this set of figures.

Jessica's colors are accurate although she has a pretty blank stare. Her eye is not as close to what it should look like and the faded paint job there and on her lips makes it appear not as correct as it should be. Her.. bosom obviously isn't as ample as it should be but it's not too bad and her dress top color is very accurate.

One of her hands is sculpted open, but the other is sculpted with what looks like the fingers closed, like maybe to hold something. I don't want to consider her skirt an accessory but sadly that’s all she's got. A huge disappointment since even a frying pan would have sufficed and I'm convinced that's why she's sculpted with a closed fist. The skirt is a shimmering dark pink material on the outside, but white on the inside which is very visible. It is fastened at her waist by a small square of velcro. There is a small fake jewel glued on top of the velcro on the outside of the dress, which looks a little odd. If you take her skirt off she's just wearing a one-piece and again you'll see she's not as curvaceous as in the film. 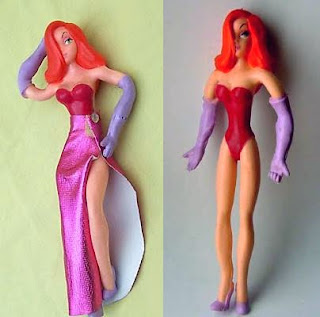 Her small feet are sculpted with her heels and foot as one piece. It's pretty impossible to have her stand on her own and if you do get her to she does not stay up long unless you lean her against Roger or Baby Herman's chair.

There are other characters that could have definitely been included. Four of the five weasels are missing and could have added to the fun factor. Benny the Cab would have been a great addition in this scale, along with some nice accessories (rumor is the small version was pulled from toy shelves due to a choking hazard.) I don't know how well a Dolores figure would have worked, but if they would have added her with Eddie as a two pack, it would have increased the value a lot. Bongo the gorilla bouncer would have also been an interesting character to see. No playsets were created but this was time way before The Simpson's voice activated type technology was available and could have been really beneficial to this or other Roger toy lines. I'd love to see a company like McFarlane do some figures. They'd really be able to capture the gritty realism of the humans and also make the colorful, 2D Toons as they are supposed to look.

The 80's is still a very popular an fun time so one could only hope for the possibilities of another, or initial, Roger Rabbit toy series! 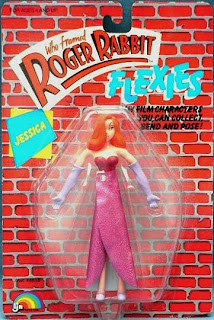 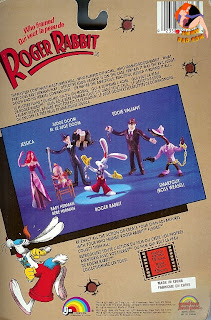 The Jessica Flexie gets a 3½. It's fun, and the only real figure we have seen so far but lacks detail and an accessory.