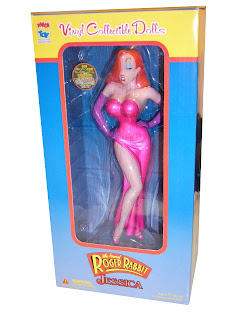 In 2002, the company Medicom Toy released Vinyl Collectible Dolls of Roger Rabbit and Benny the Cab. The results were stunning. For a number of years before that, Medicom had been releasing various Disney characters, such as Mickey, Pooh and Buzz Lightyear. Each statue pays very close attention to character detail and the colors are spot on. In 2003, Medicom released it's 9 inch Jessica Rabbit Vinyl statue. However, like all others, it was only available in Japan. I stumbled upon a great website called Hobby Link Japan, which sells all sorts of collectibles from overseas. After a short back order scare, I placed an order and my statue eventually arrived in perfect condition. I'm very happy I made that $30 investment. 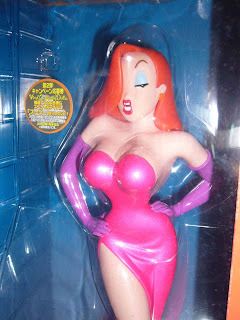 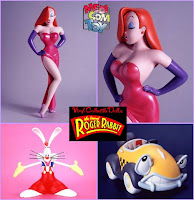 The details are all correct here. The original promotional art for this statue shows Jessica with her eye closed but the final product is changed to show just a little bit of her eye, giving it a much better effect. The hair was also changed from original plans but the end result is perfect. It's actually a separate piece and covers her right eye nicely, giving it a much better look than if it would have been sculpted as part of her head. And yes, she does have another eye under that hair. The only one small complaint would be her earring should be more yellow to stand out from her hair color. 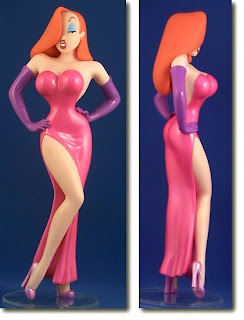 Finally, they made Jessica in dimensional form with no nose. On the Special Edition DVD, the film crew jokingly discuss never noticing her small nose, but the truth is Jessica barely has a nose when looking at her straight on. When you see her sculpted, a nose too big sticks out like a sore thumb. This statue corrects it dramatically. Her hands have the tiny, pointy fingers they should have, and her pink dress is done in some slight shimmery kind of pink that just cannot be captured in photos. 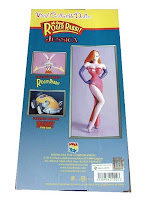 She has a clear plastic stand that is connected to her left foot to keep her standing. I would say her shoes look a little too big but given the over all gorgeousness of this statue, it don't much matter! You do not see any plastic seams, glue or paint slop anywhere on this statue. It's amazing considering she looks to be about nine separate pieces. The characters come in a box with a front and top window and a blue, red and yellow color scheme that works really well. They are limited editions of 1000 each. I did sell off my Roger statue, which was equally as awesome, but I'm sure hanging on to Jessica. I see her going for at least $100 on-line and even at that price it's worth picking up. 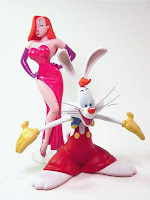 This gets a 5! Best statue ever!