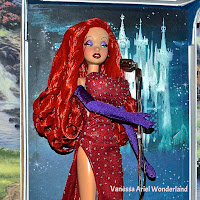 Disney started a series of 17 inch dolls in 2009 appropriately with Snow White. If you pre-ordered the Diamond Edition DVD you would receive the movie, the doll and a lithograph set for $99. As times passed the dolls were sold on their own and prices rose, but the Princes and Villains were also added into this larger scale series, all complete with Certificate of Authenticity and display box. Since there hasn't been many characters made beyond the Princesses, let's look at one fantastic creation of a custom Jessica Rabbit 17 Inch doll.

As of 2016 almost every Disney Princess has their own 17 inch doll in the official Heirloom Collection. The amount of dolls produced started off very conservative, but expanded drastically over the last two years. Snow White, Cinderella, Ariel, and Tiana each have one 17 inch doll. Rapunzel and Aurora have two, as does Merida who was released along with Queen Elinor in a set. Rumor has it that Belle might be the next princess to have another doll in a different dress coming soon. Jasmine has three different dolls and saw the start of the Platinum Collection. Frozen has the most with four versions of Anna and Elsa. Prince Eric, Prince Phillip and Kristoff each have one doll, while Aladdin has two. 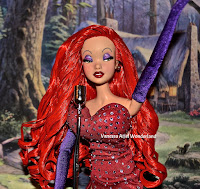 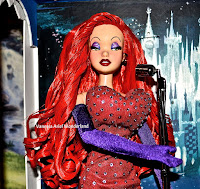 The villains represented with one doll each are Mother Gothel, Queen of Hearts, Lady Tremaine, Ursula, Maleficent and Jafar. The only few major characters to be passed over are Pocahontas, Mulan and The Evil Queen. We don't know if Disney has any plans to release these characters, but it would be a big omission if they are left out. Some non-Princess characters have been released, Sergeant Calhoun from Wreck-It Ralph and Alice. The live action movies of Cinderella and Alice also have dolls in the series. However, there are many more characters people want to see made, like Megara from Hercules, Esmeralda from The Hunchback of Notre Dame, Cruella DeVil, Rey and Princess Leia. Naturally, I'd love to see Jessica Rabbit made. One doll customizer, Raphaël, has his own version and is allowing us to see the amazing results.

Jessica has only had two official dolls, one by Mattel and the other by Tonner. Disney has not made their own doll of her which goes along with the current lines they sell now. From this great custom, you can see how nice she would look in the familiar Heirloom Collection box. It was originally a Snow White singing doll, which was rerooted with the familiar orange hair. The face repaint is very wonderfully done and the style looks like it fits so well alongside the Princesses. There's even a microphone and the proper crystal embellishments on the dress. Jessica presents one unique problem in that her body proportions are more exaggerated, but Disney has been making new body shapes (like Ursula and The Witch from Snow White) that one modification shouldn't be too difficult. Or, in the case with this custom, add a little padding in the right areas. Hopefully, Disney will broaden the character selection and we get to see some new faces made into 17 Inch dolls. Visit the Vanessa Ariel Flickr page to see more custom Disney dolls.