The Jessica Rabbit store was not short on the amount of merchandise it offered. Though the building was only a few hundred square feet of shopping space, it was packed with shirts, mugs, jackets, magnets, towels, tote bags, jewelry, and yes... even lingerie. Who Framed Roger Rabbit was a blockbuster movie, it was followed by two short cartoons, with another on the way by the time the Jessica Rabbit store was in place. It would appear there would be plenty of time to capitalize on the character - but unfortunately that time came to a quick and sudden end. There has been little record of Jessica's and the merchandise that was once available, especially since Pleasure Island is now a thing of the past.

Here for the first time is a very exclusive look at the vast selection of merchandise available at Jessica's. We will get inside information about some of the items through artist interviews and even see concept art for merchandise never produced. 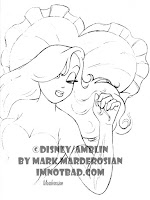 Artist Mark Marderosian has secured his place in Disney History for giving us the iconic neon Jessica Rabbit sign that Pleasure Island became remembered for. The sign, however, was originally sitting atop Jessica's, a store which featured nothing but merchandise of the title character herself. Back in these days, you didn't often see character-themed stores like you do now. The few that were around were mainly found in the parks, and consisted of the classic characters like Mickey Mouse or Winnie the Pooh. With a short time between conception and opening day, Mark Marderosian also had the task of creating an assortment of Jessica Rabbit merchandise to be sold in the store. In an interview I conducted with him in 2008 he discussed what he created for the store, and also talked about some merchandise that didn't get produced: 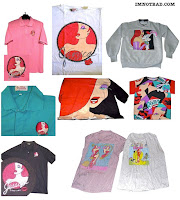 ImNotBad.com:
Can you recall just how much Jessica Rabbit merchandise was produced?

Mark Marderosian:
I'd submit a list of 12 t-shirt ideas and they'd pick seven or eight. I'd draw concepts, draw tighter pencils and ink them by hand, and then send them over. So those t-shirts were the first [created]. It's amazing how much material myself and other artists created for that store. I was lucky to get in early and do pins, key chains, clothing, just about every article known to humankind. Designs for 3-dimensional objects too! Sculptures, plates. When I met Gary Wolf, the [Roger Rabbit] creator, two years later, I thanked him for creating the characters and putting so much food on my table!

ImNotBad.com:
How was it for you to be immersed in a world of Jessica Rabbit and being required to come up with fresh, new art?

Mark Marderosian:
It was great drawing Jessica Rabbit. At the time, I was also corresponding with Earl MacPherson, a great pin-up artist of the 50's and I felt his inspiration pushed me to even greater posing and character expressions.

ImNotBad.com:
Here are some examples of merchandise that never did get produced. (Above)

Mark Marderosian:
They are the color comps. The one I get a kick out of is the clocks - I remember drawing those out [...] I loved doing those marker comps - fun to add highlights and shadows by hand - more fun than doing it on the computer that's for sure. The comp of her on that piano was inspired by a Michelle Pheiffer movie at the time, The Fabulous Baker Boys. I had designed that back scratcher and drew what it would look like from all angles but that prototype was as far as they got. (Right) 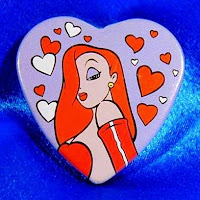 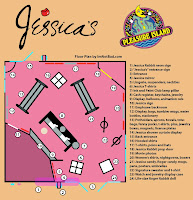 Through the Seventies and on into the Eighties, Wendy Gell's designs were on the cover of Vogue and in thousands of editorials in magazines all over the world. Wendy created sequined Disney characters such as Roger and Jessica Rabbit, Wizard of Oz jewelry, and masks from The Phantom of the Opera. I was happy to interview her about her contribution to the Jessica's store, giving us the first ever Jessica Rabbit pins: 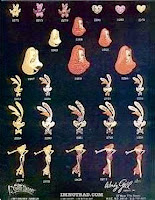 ImNotBad.com:
Can you explain a little about how the pins were created?

Wendy Gell:
We had to have the Disney artist do the drawing for us so it would be perfect. We had a Disney model-maker create it in wax, as big as the pin was going to be. You could imagine how hard it was to get the face right being so small. Then it was cast in metal, they spin them around and the metal goes in to six different areas where it’s poured into the Jessica Rabbit mold. After that they sand it, they plate it - then we painted it and added pavé crystals. It’s a really expensive and lengthy process. 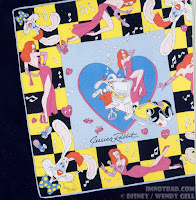 ImNotBad.com:
Did you find that Roger and Jessica were popular characters?

Wendy Gell:
I have no Roger Rabbit stuff left at all. I tried to keep one of each thing, but it just didn’t happen. People would beg me for them and I sold my last one [...] There were plain metal and plain painted pins. The best were the ones that were pavé and enamel.

ImNotBad.com:
What do you think Disney’s opinion of the Jessica Rabbit character was? Were they afraid she was too sexy or shapely?

Wedny Gell:
Jessica Rabbit was like the million-dollar babe. I thought they just adored her. I never heard anything negative. We went to a lot of parties and I never got anything that she was too sexy or they weren’t happy with her. Disney themselves gave Princess Diana a Jessica Rabbit pin and she absolutely loved it. Disney gave it at the premiere. So I would say that Disney was not afraid of Jessica Rabbit. 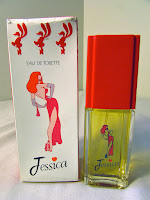 It's always been unclear as to why the Who Framed Roger Rabbit characters seemed to disappear by the mid 90's, but in 2003 Jessica started to make a huge comeback with the onset of Disney Pin Collecting. As of 2015 there are over 600 Jessica Rabbit pins released and many of them became highly popular. During this time there was a resurgence in her merchandise as well. It was reminiscent of the days of the Jessica Rabbit store and Disney Artists might have taken a cue from what was sold there. Unlike merchandise released during Who Framed Roger Rabbit's opening, things sold in Jessica's mainly featured her rather than Roger. It's sad that the store might not have had a fair shot to show its true potential, but what was released is a great selection of Jessica memorabilia. 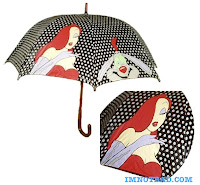 Smaller items like keychains, dog tags, pens and pencils were found throughout the store. An interesting umbrella with Roger and Jessica is one very rare item that was an exclusive to Jessica's. Sport bottles, wrist packs, fanny packs and tote bags rounded out the variety of merchandise for everyday use.

There was an assortment of mugs, all with an image of Jessica up close and personal. The purple mugs were either decorated with hearts or kisses, while her signature mugs were available in teal, white and pink. There was also a signature Jessica glass and tumbler cups for kids that had glitter and small hearts floating inside. Specially made tissue paper with Jessica Rabbit's red lips was used to wrap any glassware.

Jewelry and accessories were in large supply. Jessica had her own watches, one with a replica of the neon sign complete with moving leg, and another was a signature watch much like the mugs. Long before Pandora, Jessica was showing up on charms. The bracelets and necklaces also featured the face and signature motif, while the Disney Charmers had miniature figures of the characters in sterling silver or gold.

Jessica Rabbit did have her very own "Jessica Fashions" line that was available in the store. This consisted of certain jewelry pieces, slippers, nightgowns, chemises, camisoles, teddies and sleep-shirts. They all featured some element of Jessica and became more of what the store was remembered for. Clothing did make up a larger portion of the store, but there was a much wider selection of things beyond lingerie.

(Photos above via PlutoParkingTV)
In the clip above (left) you can see the lingerie was prominently displayed in the front of the store, but there are also accessories like suspenders and neckties. The next photo (center) shows part of the other focus wall which had crop tops, shorts, an airbrush-style shirt, embellished t-shirts and sweatshirts. The last clip (right) shows the dressing room door and back focus wall, which showcased the signature Jessica Rabbit store t-shirt, along with Polo-style shirts with Jessica's face and signature available in black, white, pink and teal.

One quote shirt found in the store read, "It's hard being a woman, looking the way I do...". The aforementioned shorts were available in several styles such as the one above with Roger and Jessica in vibrant colors. There were also jean shorts with lace trim and a Jessica patch. Several jackets were for sale with Jessica's face or logo and were fully embroidered.

From Brooches, shower curtains, stickers and hats, to beach towels, robes, candy and license plates - Jessica was themed to nearly everything. Don't believe me that there was so much to be offered at the Jessica Rabbit store? You can see for yourself! Below is the official Jessica Rabbit Store Manifest, exclusive to ImNotBad.com, which lists over 200 items for sale during summer of 1991. After that, you can take a short trip to Jessica's by watching a video that goes inside the store, showing the space, decor and wall-to-wall Jessica Rabbit!

Jessica's closed some time in 1992. Though the D23 website lists the closing in 1993, it was definitely gone by the previous year when I tried to pay it a second visit. The Jessica Rabbit neon sign was relocated to the West End Stage around 1996 to become part of the Pleasure Island Tonight! sign and remained there until June of 2006. Pleasure Island officially closed in September of 2008 to transform into Disney Springs. It was by chance I got to visit the Jessica Rabbit store when it was operating, and is something I'll never forget. The theming of Pleasure Island might have gotten lost in translation over the years, but its original concept was solid Disney storytelling with a fun combination of the "adult" side. As the original tagline stated, "Fun for all and all for fun!" Pleasure Island WAS fun - and all inclusive. It certainly shaped my happy Disney memories by adding Jessica into its theme. 25 years later, The Jessica Rabbit store should certainly be remembered for being the start of character-themed shops and playing a big part in paving the way for Park Exclusive merchandising. 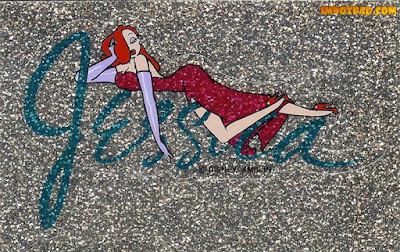