In taking a break from the usual Disney related news, I wanted to show a custom figure I had commissioned that is absolutely amazing. In rediscovering some retro cartoons online I stumbled across The Trouble with Miss Switch, an ABC Weekly Special cartoon from 1980 that I had watched often. The cartoons were based on a 1971 children's book of the same name by Barbara Brooks Wallace. The book was fairly popular and when it was translated into cartoons they were re-run frequently due to the high interest. The cartoon specials were produced by Ruby-Spears who made shows like Heathcliff and Dingbat, Alvin and the Chipmunks and The Plastic Man Comedy/Adventure Show. I wondered how any popular 80's cartoon would have slipped by without some kind of merchandise - other than the books whose covers were changed to depict versions of the characters from the cartoon. That's when I asked a talented customizer. I had followed his work for many years and asked if he was up for the challenge. The end result is exactly what I had asked for and turned out to be a fantastic custom figure. Read all about the creation of this figure and learn more about the artist living in Ireland who has a love of pop culture and action figures...

When I rediscovered Miss Switch, I clearly remembered watching the cartoon specials on Saturday afternoons. They were shown again and again in the early 80's and being as big of a lover of action figures then as I am now I know I wanted some type of toy of the character. Sadly it never happened and the specials really faded away drastically. The has never been rerun or released on DVD. It occurred to me while following the work of illustrator Gary Anderson on Deviant art that he would be up to such a task. How did I know? He had started to really delve into customizing action figures, making creations for himself and as commissions. Quickly, his work was impressing me more and more, but it was seeing his custom She-Ra Princess of Power figures that had me transfixed. While looking at two of his figures (Wonder Woman and Shadow Weaver) I thought that if he combined some elements from each, we'd have the figure I was looking for. It was great to talk ideas with him and he has an even more interesting story I wanted to share with everyone:

ImNotBad.Com
First, I would like our readers to learn a little more about you.

When I was 19 I moved to Belfast to study art and design. In 2010 Me and my partner bought a house in Lisburn (Northern Ireland) where I became a self employed artist and currently work from home.

INB:
Were there any particular films/shows/cartoons that inspired you as a child?

Gary:
My major childhood inspirations would be the He-Man and She-Ra cartoons, the Star Wars movies and I am also a big Wonder Woman fan. 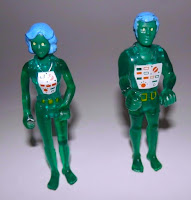 INB:
What were some toys/figures/statues that you liked the most as a kid - and now?

Gary:
My Favourite toys when I was a kid would definitely be my Star Wars figures and my He-Man & She-Ra figures. Me and my older brother also used to enjoy playing with Action Man figures. The first action figures I can remember owning and being very fond of would have to be these two characters called X-Ray Woman and X-Ray Man. They were from a line by Fisher Price called The Adventure people.

When I was in my teens I got into Star Trek in a big way (especially The Next Generation) and started collecting all the Playmates Star Trek action figures. I do still enjoy checking out modern action figures and really like the Masters of the Universe line but my heart will always be with my vintage childhood toys. I just love the nostalgic feelings that go along with them.

INB:
Do you remember what inspired you to become an artist/illustrator?

Gary:
To be honest I have always loved art. From as early as I can remember I have been drawing and making things. I remember one of my earliest Christmas presents was a Crayola art set which I used to bring everywhere with me.

INB:
What do you enjoy the most about making illustrations (for yourself or clients)?

Gary:
Basically just the whole process of creating something. Plus knowing that my work can bring the same fond childhood memories to people like myself is a great feeling. I have also had clients commission me to do art work as wedding and anniversary gifts for their loved ones, so it’s nice to think that something I created can bring people happiness on their special occasions. I have even been asked to make cake toppers for wedding cakes in the past which was pretty cool.

INB:
When did you start making custom figures?

Gary:
I was always loved making things for my figures when I was a kid. I used to make play sets for my Star Wars figures and different accessories etc for Action Man. But I guess I started making custom figures for clients around 2005/2006

INB:
What led you to start using the Princess of Power figures for customizing?

Gary:
Some of the first custom figures I was asked to make for clients were POP characters but in the 200X style. I used to have to buy vintage figures for parts to make them. This then led to me making actual vintage characters. The fact that I loved POP from my childhood was an added bonus.

INB:
Besides Princess of Power figures, what other figures do you like to use for customizing?

Gary:
Anything really. I love when people come to me asking if I can make a particular character and then having to do research into finding what figures would work best to make their character. The majority of the time I do try to source base figures from the genre the character is from, I feel this helps make the custom look more authentic and fit in better with other figures from the persons collection.

INB:
What are some characters you're thinking of making into customs?

Gary:
One figure I really want to make for my own personal collection is Arex from Star Trek the Animated series. I am still trying to think of a good way to go about making him though. 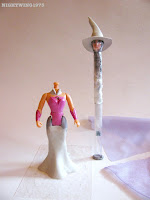 INB:
Can you tell people a little bit how you approached making the Miss Switch figure.

Gary:
I used vintage She-Ra figures as a base, Glimmer for her body and the head from Catra. I started off by joining Glimmer's legs together by wrapping them with thin wire. I then sculpted her collar, skirt section and also made her hat from a product called 'Fixit Sculpt'. Once the sculpt had set I then painted her outfit and hat using Humbrol enamel paints. I then replaced the jewel on her chest with a gold one. Her cape was made using purple glittery fabric taken from an old Barbie doll dress. This fabric was also used for the trim around her hat. The buckle on her hat was taken from a Barbie belt. Finally I got the Catra head and styled her hair using the boiling water method. I then attached the new head to her body. I then painted her eyes and makeup.

The end result of the Miss Switch figure made by Gary was amazing. He got every detail right and did a perfect job with this custom. Seeing it in person, I was amazed. From top to bottom he nailed all the details we discussed about this figure. I'm extremely impressed with his sculpting on the dress and definitely on the hat - it really makes the whole piece. As you can see from his customs like Wonder Woman, Princess Jasmine and Jem, he really knows how to transform a Princess of Power figure into something new and unique. If you want something totally original, he can do that too. You give him the details and he'll create a custom piece for you. I know I'll be calling on him again for more custom figures very soon! 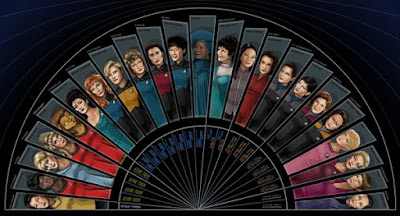 Please check out the artwork of Gary Anderson on:
Facebook
Deviantart