Pleasure Island was more than a new location filled with shops and bars, it was actually an entirely new themed area. The island itself had a backstory of once belonging to Merriweather Adam Pleasure, who used the buildings for his seafaring business. After he was lost at sea the island and its buildings sat abandoned until it was discovered by Imagineers. They were determined to bring new life into the old island, and also pay homage to its previous owner. Once restored, the island was bustling again and even had its own mascot, the moon-faced Grand Funmeister. All the buildings had a rustic, industrial look with many of them having metal side paneling, vaulted ceilings and large windows. The Jessica's store was no exception, and seemed to incorporate an older style with that of a modern city building.

Even though the mermaid from Splash didn't get her signature saloon with a tail-swinging neon sign, the idea may have inspired what we know as the Jessica Rabbit store. Let's take a closer look at the area of Pleasure Island where Jessica's was located, the building, brochure maps and what it was like for Jessica Rabbit creator, Gary K. Wolf, to see his character's very own store. 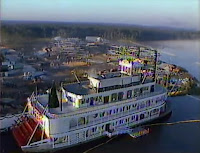 Though the point of competition is arguable, Pleasure Island did see success with its theme, nightly fireworks display, dance shows and musical performances. The stores were located mainly in the center of the island, and some began the trend of catering to Disney Collectors. The Suspended Animation store was filled with movie posters, statues, animation cels and other Limited Edition merchandise. Next door was YesterEars, a shop that featured nothing but the 1920's and 30's style Mickey Mouse gang. Then there was Doodles, Pleasure Island's official "party headquarters" which sold shirts and other gifts with the island logo and mascot. 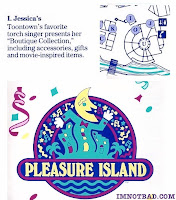 In the very middle of it all was Jessica's. The Disney Village Marketplace and Pleasure Island brochure did have an official writeup for the store during the short time it was open, which reads:

The building did stand alone but there was also a stairwell structure next to it which was fitted with colored spotlights and speakers, and was attached by a high walkway and a ticket booth. Located on the corner of Breeze Way and Chandler Row, the building was originally painted yellow when it housed The Island Depot and The Dick Tracy Store. The outside metal paneling of The Jessica Rabbit store was painted a vibrant lavender to compliment the large neon sign. The west side of the building had glass window panels from floor to ceiling. This is where the main entrance was located. The glass panels wrapped around to a second side of the building (and a small portion on the roof), which allowed a lot of natural light inside. The sloped sides gave the design of the building a more modern appearance. There was one more entrance around back on the east side, which also had a few windows and an entrance sign. The entrance signs were a box with pink borders and the store logo on two sides in teal neon, topped off with a red neon kiss.

The logo was simply Jessica's signature and iconic lips, something that was used many times throughout the store and merchandise. Directly above the entrance was the famous Jessica Rabbit neon sign. I interviewed artist Mark Marderosian in 2008 about its creation and design:

ImNotBad.com:
[An] important piece to the Jessica's store to discuss, the neon Jessica Rabbit sign which became an icon in Pleasure Island for some 15 years. There are many Jessica fans and animation enthusiasts who never got to enjoy its original purpose, being part of her very own store. Can you tell me how you created this legendary pose?


Mark Marderosian:
I did a drawing of Jessica reclining on her back, looking at the viewer with both legs curled up. Just for the hell of it, I faxed it over to Mark [Seppala]. He came back and said, "Whew! We can't use that, especially with that pose, but it's a great drawing." The very next drawing I did was Jessica leaning against a stool with one arm behind her head, legs crossed. I submitted it and Mark said, "That's it! That drawing and her face is Jessica to me!" I then inked it by hand at a large size, about 2' by 2' without a single spot of white-out or exacto blade scrapping. I sent the original over and the inking sealed it. We cut the stool out, blew it up and it became the art for the large sign.

(Photo right by Shannon Barland)
ImNotBad.com:
The sign also featured real sequins on her dress and the famous swinging leg. Who came up with that idea?

Mark Marderosian:
Once I drew the pose of her with her legs crossed, someone at Disney Merchandise had the great idea of not just making it the sign, but putting the gears in and having her leg swing back and forth. Just seemed a natural given my pose.

The Jessica sign was also two-sided, so that if you were approaching from the east you would see Jessica's back on the opposite side of the building. The whole sign was outlined with purple neon and looked stunning at night, reminiscent of the Vegas Vickie cowgirl sign in Las Vegas. When this almost 25 foot sign was part of her store you were in much closer contact to it than when it was moved hight atop the West End stage years later. As with all the buildings on Pleasure Island, this one also had an intriguing backstory:

Pleasure Island Administration Building, 1913
Originally a wooden shack housing Pleasure Island's paymaster, accountant, bookkeeper, telegraphy office, mailroom, first aid station, and social center, the first building on this site (constructed in 1913) burned to the ground in 1933 during a party celebrating the repeal of Prohibition. A subsequent building erected on the site was blown apart by a savage 1944 typhoon. Refurbished 1988-1989.

Inside the store there was a slight art deco style and dressing room motif. A large circular mirror with Jessica's logo was near the entrance. The displays were a dark and light grey combination, while the register area had a black top and blue neon. A lighted pillar which resembled one in the Ink and Paint Club was attached to the cash register. High above the cash register was a dimensional cut-out of Jessica laying across a sign of her name. The Jessica shower curtain hung facing out the smaller east window. In one corner of the store there was a dressing room door which included a star and Jessica's name on it.

Above the stage door was a large standee of Roger, Jessica and Benny the Cab. There were some display elements which decorated the store. Behind the register was a vase filled with red roses, Jessica Rabbit hart shaped mylar balloons, a small Roger Rabbit plush doll, two pink doll-size chairs and a miniature mannequin form displaying the Jessica Rabbit necktie. One focus wall featured a small pink hatbox with a sequined letter "J" and flowers, while another had a large gray hatbox with Jessica's sequined name and kiss, a framed picture of Roger Rabbit, a perfume bottle, flowers and two pink miniature mannequin forms.

As we can see from the black-ligh mural which once hung in the Rock 'n' Roll Beach Club, Jessica's became a noticeable and distinguishable part of the island. The sign was always attention grabbing, and even after the store had closed, the sign was moved to the West End Stage where it became part of the Pleasure Island Tonight! sign. It remained there until 2006 when refurbishments were started to re-theme the area.

To commemorate this 25th Anniversary, Jessica Rabbit creator Gary K. Wolf has given ImNotBad.com a firsthand account of seeing his character in lights:

Gary K. Wolf:
I will never forget my first sight of The Jessica Store in Pleasure Island. There was my character, a hundred, no two hundred, no three hundred, no a MILE high, sitting on top of a huge store. She was lighted up and her shapely crossed legs swung back and forth, back and forth like a long, sexy metronome. When I went inside, I saw row after row, shelf after shelf, rack after rack of exclusively Jessica merchandise. I saw Jessica perfume, Jessica lipstick, Jessica sweatshirts, Jessica you-name-its!!! The merchandise was top quality and well suited to the character. And oh so not-Disney! The two especially un-mouselike items were both shear, spaghetti strapped, baby doll negligees. Items I guarantee would not been found in Minnie’s closet. I asked the sales staff who bought such suggestive lingerie. They told me they sold those mostly to conventioning businessmen who bought them as presents for their wives and/or girlfriends. Which, I suspect, accounts for the abnormally high birth rate during that period, and the correspondingly increased number of divorces. Ah, Jessica. You do know how to break, and make families!!!

(Photo above via PlutoParkingTV)
In Part Three we will take an in-depth look at all of the merchandise available at Jessica's, from shirts to mugs to boxers and nightgowns - even art of things that were never made...