At long last there has been a full reveal for the 2015 Designer Fairytale Collection dolls. The theme this year is Heroes and Villains, however, it is still called the Fairytale Collection. There are another five sets of couples, some which have not been seen in doll form or in the Designer line before. Take a look... 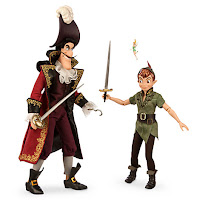 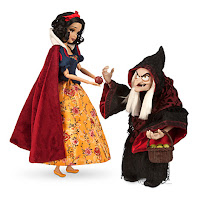 The first two sets seem to be the ones everyone is taking about, as they include characters that haven't been seen as dolls. Peter Pan and Captain Hook have both not been released as dolls in a very long time, and certainly not part of a Designer series before. This will be the first male Disney doll set, but there is a small figure of Tinker Bell flying around included as an accessory, as well as swords and Hook's hat. The next set is Snow White and The Witch. This is the third Designer doll for Snow White, while it is a big surprise to get The Evil Queen in her old hag form. Snow White holds a big red apple while The Witch carries a basket of green apples. 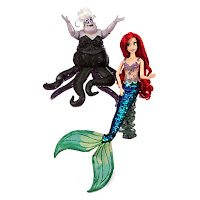 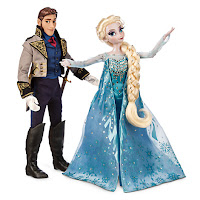 The next two sets seem to have mixed reactions. Ariel and Ursula have both had Designer and Heirloom dolls, in fact, this set features an Ursula doll that looks very much like her 17 inch doll. Ariel has a fully sequined tail and has a new type of top which is embroidered onto a clear fabric to mimic the shell design. She also comes with a rock accessory to sit on. Elsa and Hans were rumored early on and a leaked photo showed what is supposed to be a D23 Exclusive with Elsa in her coronation dress instead of her snow queen dress with royal accessories. Hans comes with his sword. 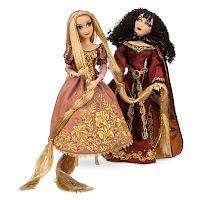 The last set is one that seems to be executed very well, Rapunzel and Mother Gothel. Both wear intricate versions of their clothes and Mother Gothel has a full cape and dagger. Rapunzel has the "tinsel" effect in her hair which gives it more of a glow. This whole set will first be sold for $649.75, but each couple will be sold individually for around $129.95, much like the last two years. A new couple will be sold each week starting in September and ends around October 27 2015. The official description from the Disney Store:

Magic in the details...

Please Note: Purchase of this item is limited to 1 per Guest.

The Disney Fairytale Designer Collection was carefully crafted by artists inspired by Disney's true heritage of the fairytale beginning with their 1937 classic Snow White and the Seven Dwarfs. Celebrating the relationship between good and evil, this set features your favorite Disney heroes and heroines, and the memorable villains they faced. Exquisitely detailed, these limited edition dolls have been brought to life with thoughtful attention, and uniquely capture the essence of the fairytale foes, creating a one-of-a-kind set that will be a treasured keepsake of collectors and Disney fans! 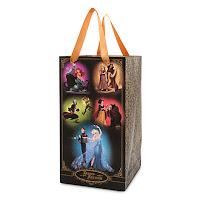