At long last Disney created a Jessica Rabbit Shoe Christmas Ornament, which is part of their Runway Shoe Ornament Collection. The shoe ornaments and ear hat ornaments have become fairly popular over the last few years, and are also made into pins. The shoes take inspiration from the character it's based on - and this one is so over-the-top toony and cheeky it can belong only to Jessica. Take an up close look at this ornament and get an extra peek at a new infamous Christmas Leg !

I think the first thing your eyes are drawn to is Jessica's severed leg serving as the heel for this shoe. At first, I thought there surely had to be better things they could have used instead of her actual leg. However, the more I looked at it I was eventually reminded of the famous holiday movie A Christmas Story and that memorable leg lamp which has become really popular over the years. It also was made into ornaments and even an actual lamp replica. So, maybe that acted as a little inspiration for this ornament? 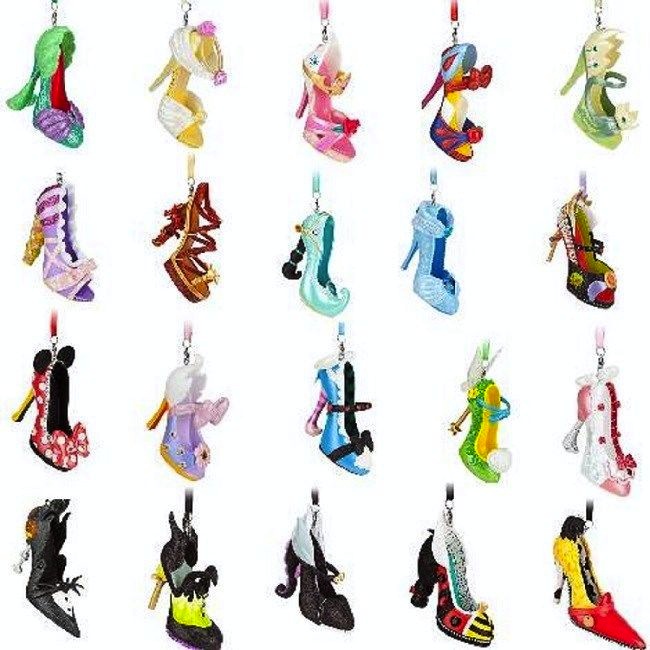 Other shoe ornaments in the 2014 series are Mulan, Anna and Elsa. Characters like Ariel, Belle, Aurora, Snow White, Tiana, Jasmine, Queen of Hearts, Maleficent, Tinker Bell and Jack Skellington have been added to the series over the years. They are sold year round and throughout the holidays. The ear hat ornaments seem to be an accompaniment to the shoe ornaments, but there has not been a Jessica Rabbit ear hat made at this time.

The Jessica shoe ornament features glitter (which matches the color of Jessica's sparkling dress) on the toe box and counter (back), a pink heart on the topline with Jessica's signature, light purple sides (matching her gloves), a tan insole (Jessica's skin color), orange in the upper lining (matching her hair color), a Jessica Rabbit leg-shaped heel, and purple film strips serving as shoe straps. 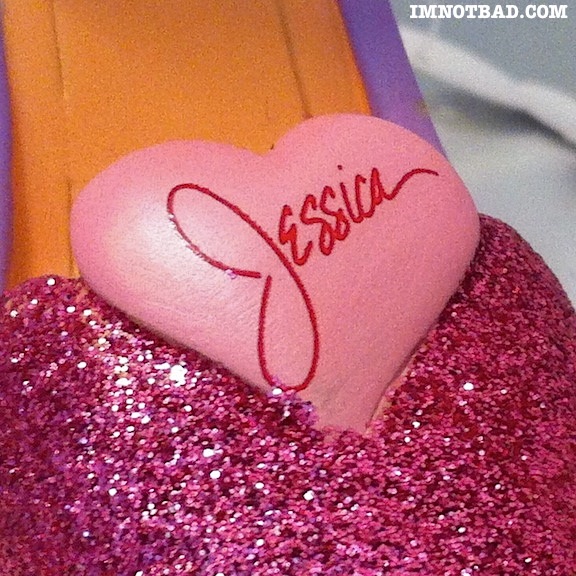 It's worth mentioning that while the signature is very close to Jessica's original one from the days of the Jessica Rabbit store in Pleasure Island, it is actually Jessica's park autograph from when she did the meet-and-greet during the 2013 Disney Dreamers Everywhere event in Paris. This was a really nice touch, as they could have simply used her old signature from her store - but all the shoes in the series utilize the park signature which characters sign in autograph books. So this is one way, and so far the only, to have Jessica's authentic park autograph. 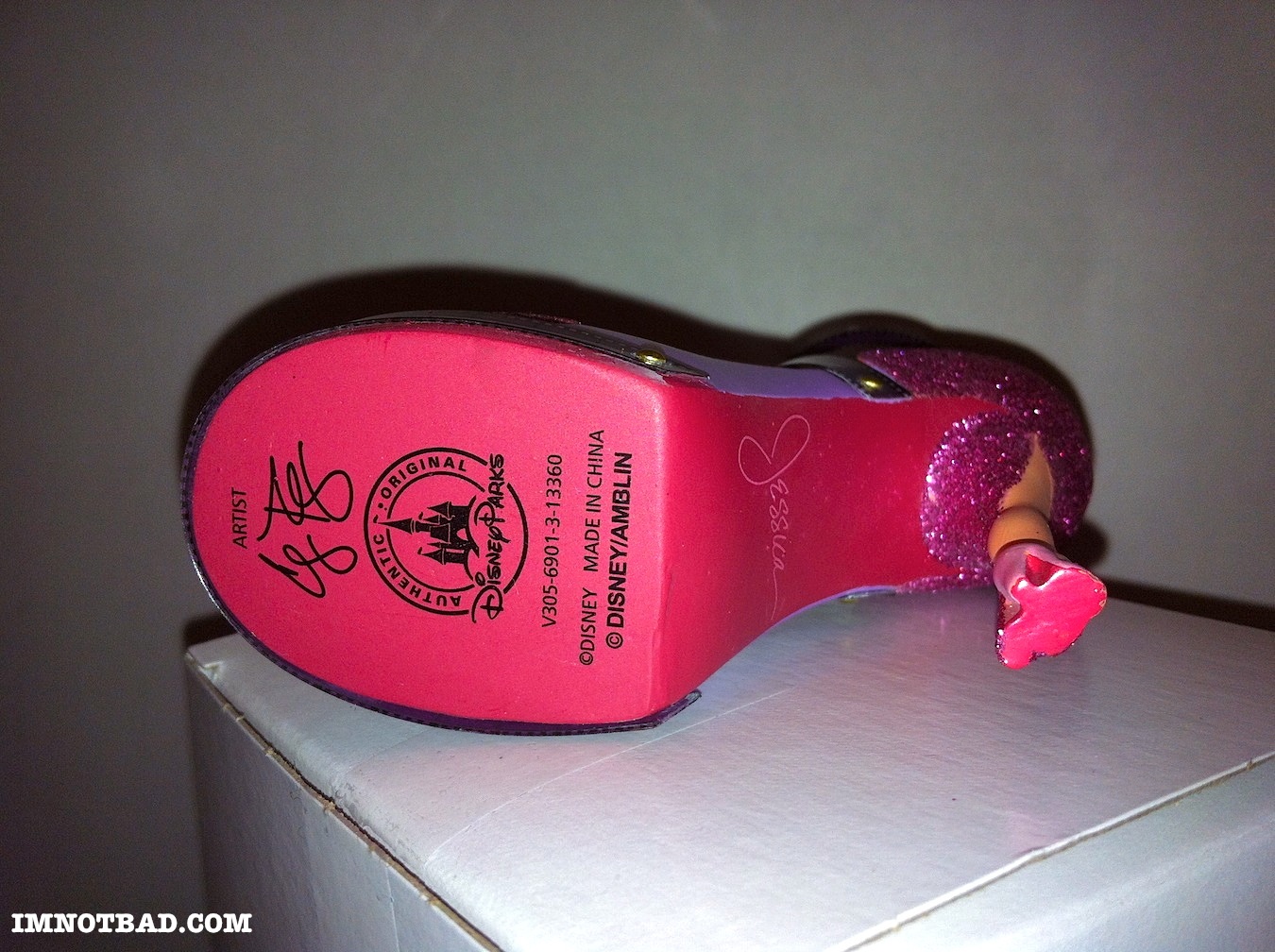 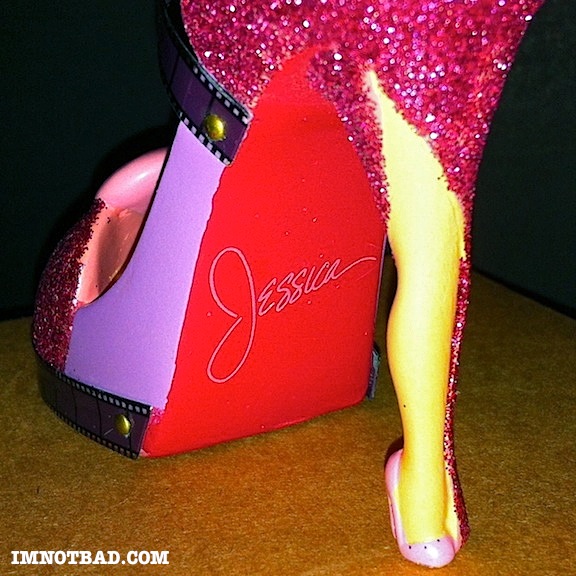 The outsole of the shoe is painted maroon (like Jessica's unsparkly dress) and has the artist signature. This ornament was made by Cody Reynolds, who has made other Jessica merchandise before - such as the Jessica Big Figure and Jinglin' Jessica Christmas Ornament. There is also the Disney Parks and Disney/Amblin stamp. Further up on the outside shank of the shoe is Jessica's signature again, in pink. This is where all the other shoes in the series feature the signature. It appears Jessica is the only character at this time to feature her signature twice on the ornament. The shapely leg of Jessica Rabbit serves at the heel for this shoe. It is her right leg with is partially uncovered by her dress. The dress surrounds the leg on the other side. The leg ends with Jessica's own pink high heeled shoe. 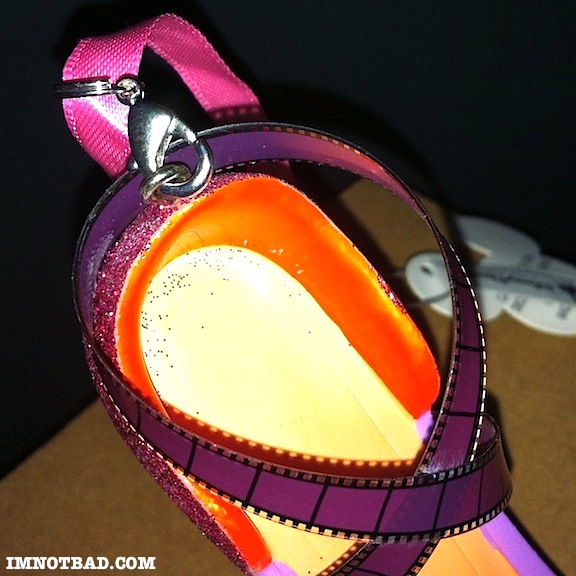 The satin hanging ribbon is pink and is fitted with a lobster clasp so you can use this off the tree as well on a shelf or for a display. The film strip straps seems to be the more fragile area of the ornament, and there have been many of these spotted with the strap broken or unglued from the shoe. Though it has the small heel, the ornament does seem fairly sturdy and solid. It stands well on its own. This ornament, like the others, is about 3 inches tall and sold for $23.95 in Disney Parks and on Disney's website. 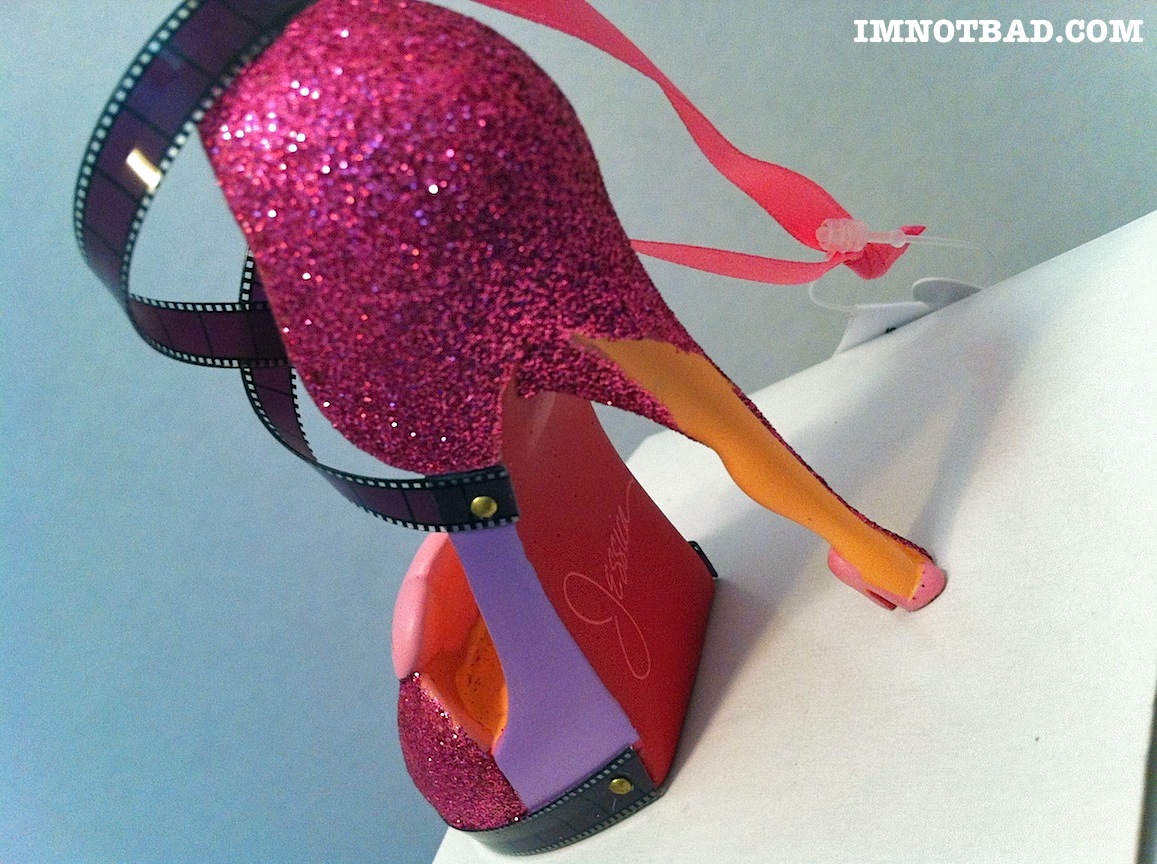 The Jessica Rabbit Runway Shoe Ornament gets a 4. These shoes are victim to what many of the current ornaments have, lots of uneven and sloppy paint jobs. You really need to look at the ornament you are getting to know if it is painted well. Aside from that the ornament would score higher, though some people are put off by the lone leg of Jessica as the heel. The thin film strip straps are also a big fragile point to watch out for. It's still worth picking up and to have Jessica's park autograph in your collection.