The Jessica Rabbit Hallmark Ornament was previewed during Comic-Con 2013. This ornament wasn't coming out that holiday season, but was schedule for the 2014 holiday. It seemed like a really long wait, but Jessica has finally been released. Take a look at some up-close photos and see if this ornament will steal the show on the Christmas Tree.

Back during Comic-Con 2013, I was pleasantly surprised to see the image of Jessica Rabbit among several other Christmas ornaments. The collection belonged to Hallmark - known well for their Keepsake Collection. This would be the first time ever that Jessica would be receiving her own Hallmark ornament. It was defintiely exciting - but also a bit of a wait since it was not due out until the 2014 season. That time is upon us and the Jessica Rabbit Hallmark Keepsake Ornament was released on July 12th, 2014.

This is the first time a Jessica ornament has been offered outside of Disney Parks or stores. It was to be the first Jessica ornament released in ten years, but in 2013 the Disney Store offered up a Sketchbook Ornament Collection featuring Roger and Jessica. Still, it had been quite a long time for Jessica ornaments and both were surprises. Hallmark stores everywhere started their Ornament Premiere on July 12 and 13, showing off most of their collection, with a few to be released in the fall. Jessica was out and on display in the section marked "The SCENES You'll Never Forget!" However, it appeared her ornament was selling fast as I saw no other boxes of her left on the shelves at the time. So, you might want to get her while you can!

The ornament comes in a cardboard Hallmark Keepsake box. It's white on the front and back with red trim on the sides. There is a picture of the Jessica ornament on the front. The back features a bio, which reads:
"I'm not bad. I'm just drawn that way!" Jessica proves there's more to her than meets the eye in the classic film Who Framed Roger Rabbit. She's got a heart of gold inside that gown she's poured into, and she'll prove it by helping save Toontown and her goofy husband, Roger Rabbit.

The signature of artist Joanne Eschrich is included, as well as the Who Framed Roger Rabbit movie logo. The box is sturdy and very whimsical and well designed.

The Jessica ornament measures over four inches in height. It comes wrapped in paper inside the box. The ornament is very study and expertly made. The pose is taken from Jessica's big debut scene in the movie, as she steps out from behind the curtain at the Ink and Paint Club. This pose has been often used, for example the Jessica Classics Collection statue, the Gallery of Light display and the Jim Shore statue. Jessica's colors are all correct and shining vibrantly. Her dress is fully glittered in a dark pink. It might be a little darker than the look in the movie, but the color really stands out. There does tend to be a bit of stray glitter around some areas of the ornament, but it didn't seem to be falling off easily. The paint applications are all very well done.

When looking at the preview ornament, it appeared Jessica was given a bigger upper lip and smaller lower lip, but the ornament for sale is corrected with Jessica's top lip being smaller and her bottom rounded. They could have perhaps gone with a light brown line for under Jessica's eye, but the eyebrow and eye make-up are very well applied. The inside of Jessica's dress is a darker maroon. Her shoes are finely sculpted and painted a hot-pink. There is a 2014 stamped on the back of her hair, also with Disney and HMK for Hallmark. It does not have the Amblin stamp. This is definitely a must have for any Jessica Rabbit fan - her first ever Hallmark ornament. It proves that she's still well-know and a sellable character. It would be great to see them make more of her, or at least maybe Roger for next year. The Jessica Rabbit 2014 Hallmark Keepsake Ornament sells for $17.95 and is available now at all Hallmark stores while supplies last. 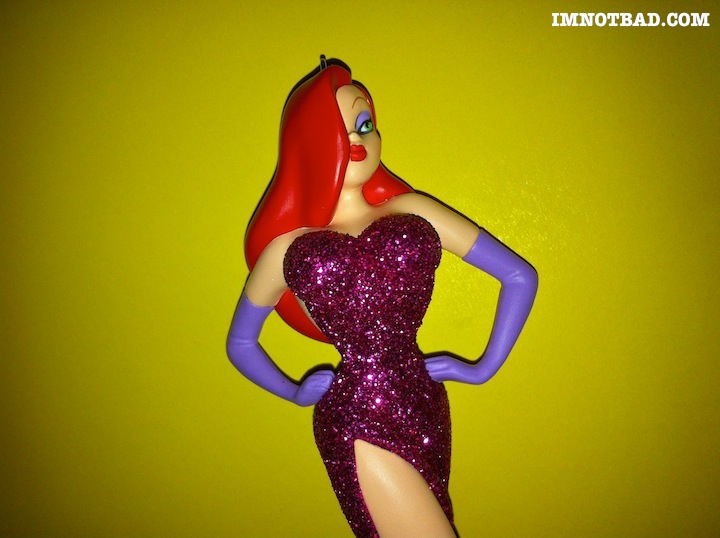 The Jessica Rabbit 2014 Hallmark Keepsake Ornament gets a 5! Besides a minor gripe about her eye line being a little too dark, this is otherwise a perfect ornament and finally one of her going into the renowned Hallmark Keepsake Collection.
Video Review: