The sky - she darkens. The wind grows angry

The end is nigh

Either that or it's just dollMAGEDDON - PART 2 !

Okay, so we didn't get Jessica Rabbit this year - but, I was at least right that Disney was not going to pass up the opportunity for another go at the Designer Collection line, even after last years near collapse of their website due to the Princess series released. Take a good, long look at the Cruella doll, and tell me they are not even considering making a Jessica Designer doll. 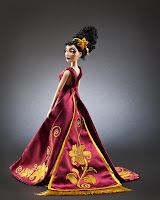 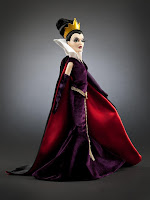 Cruella, Mother Gothel, The Queen of Hearts, Maleficent, Evil Queen, and Ursula join the ranks of Designer Doll status. This series will only feature six dolls rather than ten. The edition size for each is 13,000, and will sell for a $79 each.

Lady Tremaine from Cinderella sadly didn't make the cut, and the other villain counterparts to the Princesses would have been male, which is not the way Disney wanted to go. Personally, I believe that is a mistake. The buzz around the internet was hopeful that the ten Villains dolls would match the Princesses. Dr. Facilier and Jafar would have looked great in this line. Shan Yu from Mulan and Governor Ratcliffe from Pocahontas would have been a toss up. If done right, the dolls could have looked good, but I'm not sure how the appeal would have been. Gaston is a bit of a fan favorite, and I think people would have bought him.

It's also being noted that Disney didn't make Ursula and Queen of Hearts their usual, full-figured selves - instead making them rather trim and giving a whole different look that people are on the fence about (Ursula in particular, noting that the most sought after from the Princess Designer line was Ariel.) However, people are already picking out their favorites and there's no doubt the Designer Villains series will be hugely popular.

The D23 Expo will be the big official release, with the normal sale of the dolls beginning in September. Should this line be a success, I feel Disney MUST do one more line of Designer Dolls: The Leading Ladies Series. If they cut it to six again, Jessica, Tink, Sally, Megera, Alice, and Esmerelda could work really well. How about Blue Fairy, Maid Marian, the human version of Babette from Beauty and the Beast, Jane from Tarzan, or Mrs. Incredible. There is still a big enough selection to choose from, so my fingers remain crossed for another year!