Back in October of 2005, as everyone was gearing up for Halloween, Disney surprised Jessica Rabbit fans by releasing some of their most highly crafted merchandise to date. One such item was the Jessica Rabbit Magical Musical Jewelry Box. Does the jewelry box live up to all the expectations? Find Out! 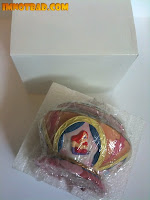 Disney Parks offered a small selection of Jessica Rabbit merchandise over time - such as shirts, towels, and pins. Disney Store online rarely had anything Jessica except pins, which was only just beginning at that time. So when Disney Online offered a Jessica Rabbit Music Box and Snowglobe at the same time, it was a big surprise. First to be reviewed here is the Jessica Rabbit Magical Musical Jewelry Box. This sold for around $45, and really is the first of it's kind. There have been some Jessica jewelry boxes from the Jessica's store years ago, but it didn't play music and was made of wood with a picture of Jessica from the movie on the top of the box. The Magical Musical box is very different. 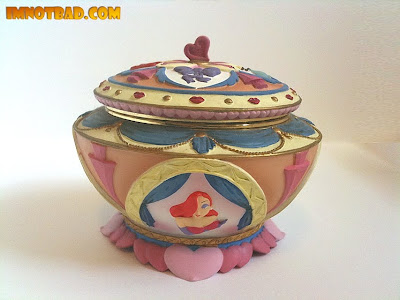 It comes shipped in a bigger Disney box, then in a smaller white box with the Disney UPC label on it, and finally a white keeper box. There is nothing printed on the main white box as Disney had been doing for some of its merchandise. The music box is encased in styrofoam and wrapped in a clear plastic bag. The music box at first glance is highly detailed. It is round with decorations covering every part of it. 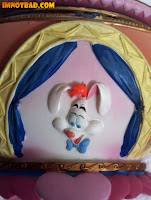 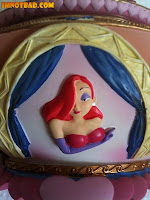 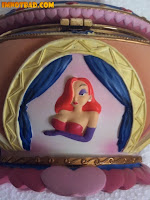 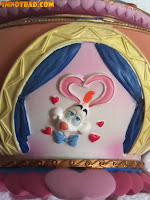 Both Roger and Jessica Rabbit are on this box with two different designs each. Roger's expressions are done very well, especially the pose where he is surrounded by hearts. His likeness is spot on. Jessica is a bit of a different story. Her poses look almost the same. Roger offers a bit more range in his expressions, so it's harder to do that with Jessica. One pose is her facing left, the other she's facing right. The problem here is with Roger, they could easily use just his head. With Jessica, they had to figure out a way to make her not look plainly cut in half, so they added her arm in front of her. I think they could have tried a little harder here. Her likeness is also a little bit off, but all the colors on both characters are correct, and both are sculpted in a relief style to give them some dimension. Actually, the whole box is sculpted in relief style, which is so much better than if the decorations were simply painted on. Jessica and Roger's images are framed by the blue curtains and archway from the Ink and Paint Club stage. You can see from the design of the arch that they matched it right to the movie. 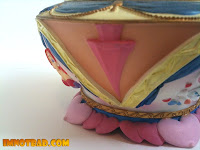 The paint work on Roger and Jessica is a little sloppy and noticeable, though most of the paintwork is. However, the amount of details put into this piece make up for that. In between the archways are the light fixtures right from the Ink and Paint Club which are clearly seen in the movie. They are all painted pink here but still add a nice touch. The bottom of the box is surrounded by a gold trim and then a heart base underneath. Smaller dark pink hearts, and a larger light pink heart under each archway make what could have been a plain base so much more interesting - and again add to the details put into this music box. 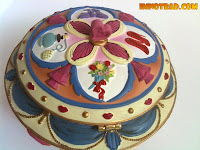 The top of the box does not disappoint and is painted better. There are also four images on top, a purple bow, red high heel shoes, a blue perfume bottle, and a bouquet of flowers. In between them are four stylized ovals that seem to mimic designs from the Ink and Paint Club, and also the lights from the club painted in pink surrounding the middle. It's topped off with a pink heart which could be used to open the lid though it is a little small and might be better to open it from the sides where kisses and gold elements await you. 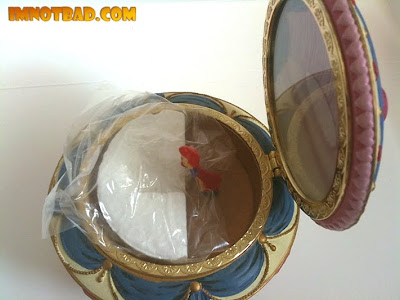 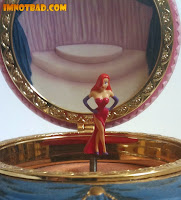 Inside, you will spot even more detail. There are small pink hearts surrounding the upper inside lid, and blue curtains and gold ropes around the lower portion. Then, like a lot of wind-up music boxes, there is a small figure of Jessica inside. A small styrofoam piece wrapped in plastic helps keep the figure in place, but after time I notice my Jessica figure, which is connected to a spring, stays bent over when the lid is opened now. The figure of Jessica is plastic, and only about two inches tall but is painted perfectly. 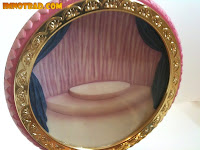 There is a backdrop on the inside of the top lid made to look like the stage of the Ink and Paint Club which is covered with glass. There were other Magical Musical Jewelry Boxes released, such as The Little Mermaid with Ariel, and Nightmare Before Christmas with Sally. Each of them have a pretty detailed backdrop, while Jessica's is just the empty stage. It's still decent enough, but I would say the Crows playing instruments should have been added here after seeing the other two boxes. 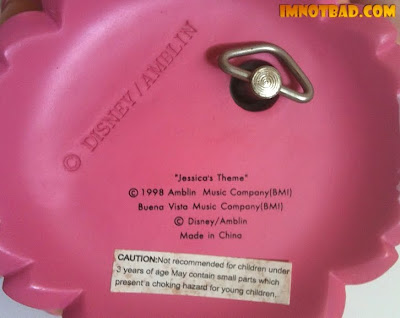 On the bottom of the base you will find the Disney/Amblin logo sculpted into it - and also in black print along with the title of the song the box plays. This is the first time we've had Jessica's Theme made for a music box and it has been included in a few other pieces since. I did note that they printed the incorrect date for the music as 1998 (instead of 1988). When you turn the silver dial you can hear the music box version of Jessica's Theme very clearly when the lid is opened. Jessica is attached to a spring and twirls around when the box is opened as well. 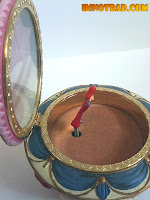 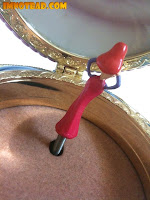 The box is not very deep, maybe an inch or less, but it does offer some room to store some pieces of jewelry - but the whole box itself is not very big to begin with (closed 3 3/4" height x 4 3/4" diameter, open 6 1/2" height). The hinge of the box is gold - though it might not be real gold it is not just painted gold like the other elements of the box. The shiny gold circles around the stage and at the bottom, creating a more secure lid to open and close. The whole box seems to be made of a sold resin and does not feel flimsy at all.

The Jessica Rabbit Magical Musical Jewelry box is worth getting, and is among the few Jessica pieces I feel safe leaving out for display. It does show up on ebay now and then and for fairly decent prices too. I believe there were only three in the series; Ariel, Jessica, and Sally - but there may have been more. Each one is very detailed - and overlooking some sloppy paintwork, it is one of the best Jessica Rabbit pieces released.

The Jessica Rabbit Magical Musical Jewelry Box gets a 4. The paint is a bit sloppy in areas and Jessica's design could have been better, but the whole piece is extremely well made.
Video Review